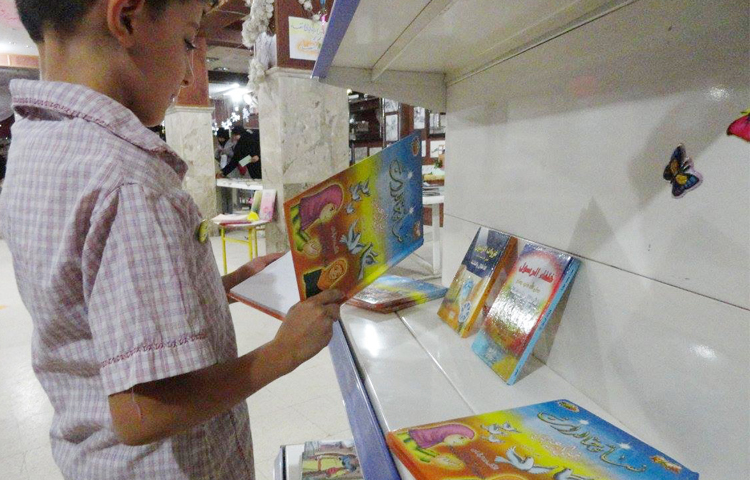 By the end of a violent day marked with blood and death in the besieged city of Douma in Damascus Suburbs, staff of Bytul-Hikma library in collaboration with “Youth towards Islamic Society”, launched a second book fair in the besieged Ghouta (Suburbs), entitled “Book and Spring II”, on Tuesday, July 28.

What distinguishes this year’s fair from last year’s is replacing the natural flower and plant fair with a “Flowers of Intellect”, as Jihad said because “flowers blooming today are people’s ideas and creativities. Thus, the book fair is held along with temporary display of paintings, architectural designs, and short stories competing in a contest announced about a month ago”.

“Challenging siege and holding such activates is a success in itself” said a visitor of the fair, who preferred anonymity, “The books are very rich and diverse compared to the war and siege we live under”.

The visitor who works as teacher in the besieged city, noted it is not only food supplies they are deprived of; “the regime has prevented educational materials as well”.

Some may doubt how the besieged people who barely make enough to earn their bread are willing or eager to read, but the teacher believes otherwise. “During wars we need to bring art and creativity into focus; organizers of the fair and of the contest have succeeded in doing so”, said the teacher lauding the “creative” and “artistic” design of the place. “It shows deep appreciation of books and their value. The fair is beautiful in every way; beauty amid the ugliness of war is a virtue”.