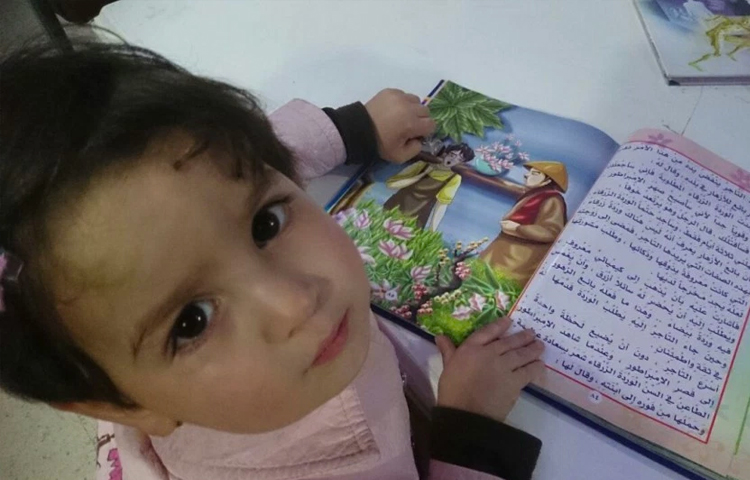 The quote was written down on one of the books in Bytul-Hikma Liberary in the city of Douma, in the Eastern Ghouta in Damascus Suburbs.

Hanin, a founder of the library where hundreds of used books are arranged on the shelves, said that the quote was written by Abdul-Rahman who used to exchange similar quotes with his beloved through writing them down on dozens of books.

“I don’t know how these books got here, whether Abdul-Rahman sold them before he immigrated, as many others did, or he donated them”, said Hanin.

“The way they communicated made me imagine that Abdul-Rahman may have been a library assistant, and Scheherazade, his beloved, was a regular visitor of the library”, added Hanin, “We were under shelling, but it was wonderful to read books filled with love, to read the dear memories of two people who most probably had to flee their country”.

From Roadsides to Shelves

Khawla, a supervisor and the chairperson of the library’s board of directors, said that the continued power blackouts and the absence of means of communications were the reasons that motivated the youth in Douma to look for “both interesting and useful” ways to spend their free time.

Khawla explained to Enab Baladi that the library was founded through collecting about 3000 books “that were categorized and archived; the source of each book was recorded along with its title and other information”, says Khawla, “the project finally got off the ground after two months of continuous work and effort; the library was opened on July, 6, 2013”.

According to Khawla, the library’s role is not limited to providing books and opening its doors for readers; a number of activities and events are organized by the library’s team. The board of directors is about to launch a book fair, similar to last June’s “Spring & Book”.

The aim behind holding a book fair is to “give back books their true value” says Khawla, “through making these books accessible to the people of besieged Ghouta at token prices proportional to their deteriorating living standards. Books were being sold at roadsides as living costs drastically increased”.

The objective of the book fair is to “promote the culture of reading, draw attention to the importance of books and to create a peaceful and civil atmosphere in the besieged area; besides, it will be a cultural landmark in future Syria, a step towards the process of rebuilding”.

The library was first sponsored by a number of organizations; however, currently it is supported only by “Adopt Revolution”, an organization founded in early 2012 by Syrian and German activists to support civil projects in Syria.

Sofie Schollkühn, a member of Adopt Revolution, asserted the importance of cultural projects during the worsening situation in Syria as they provide “an alternative retreat, away from experience and memories of the ongoing war waged by Assad against the civilians in Ghouta; it promotes the diversity of views”.

Schollkühn said that the effect of the early cultural recovery the library provides is the basis for any future positive initiatives, and it is “a sustainable project, and its team are amazing people”.

For All Passionate about Knowledge

Bytul-Hikma, which is the first library in Eastern Ghouta, receives an average of 80 readers in a “normal” day, (a day not interrupted by shelling), says Khawla. Visiting hours are divided into two periods, one from 9 am to 3 pm for females, and the other from 3 pm to 8 pm for males.

Nada, a regular visitor of the library and a student of Arabic Literature, said “Bytul-Hikma is the destination of every passionate about knowledge; it is an inclusive library” noting that the books cover readers’ variant interests. Another visitor of the library pointed out that the information available at the medical section in the library should be utilized to in helping the injured in the city – which has been a subject of continual shelling for over 36 months.

Other visitors expressed their appreciation of the library and other cultural projects, because “they liberate us from the siege we are trapped under; they enable us to read, learn and improve”.

“A pledge to preserve the place is required with all booking requests”, added Khawla.

Head of “Tanmiya” Center, Muhammad Khier Albaghal confirmed, “The center benefited from the library” because it has the needed equipment to present lectures and hold forums and courses.

Albaghal considers the library and other similar projects to “illustrate an innovative concept about books; it is no longer the traditional concept of piles on books arranged on shelves”.

Abo Adnan, a teacher and calligrapher from the city of Douma, said that Bytul-Hikma “provided innovative and variant materials on education and teaching”. He called upon the city’s Local Council and other educational organization to support school library projects as “private libraries are beyond the reach of students”.

Ali Alkahhal, a teacher at Rowad Alhuda Educational Institute, said that students at the institution frequently visit the library “to enrich their knowledge”, which constitutes an additional source of information for the students in the absence of power and communications, according to Alkahhal.

“I call for expanding cultural projects to cover the Eastern Ghouta, and other liberated areas in Syria”.

Samer Bwidani, deputy chairman of the Local Council of the City of Douma, said that the library is “a great initiative” and advised all students to seize the opportunity to benefit from “its valuable source”.

Bwodani noted that the city’s local council is about to “establish a cultural and a sport center in the city, that will later expand to the rest of Ghouta”.

Ministry of Culture and Family Affairs in the Syrian Interim Government manages a number of cultural activities in border-cities such as Gaziantep and Kilis, in addition, it sponsors a number of projects in Syria.

PhD, Samah Hidaya, Minister of Culture and Family Affairs, said that “The ministry is well-informed of the projects carried out in Syria, but the question is about its ability to coordinate with the project’s founder to provide support”.

“The ministry is exploring ways to activate projects in both eastern and western Ghouta”, and the minister –who was appointed to the office only four months ago- attributed the absence of the ministry in those area to the “difficulty of movement there, and to the deteriorating fiscal situation in the past four months”.

She also emphasized that “Bytul-Hikma may be a part of our project in the area, and our starting point in Douma in Damascus Suburbs”. The work in liberated Syrian areas will start soon, according Hidaya, “we proposed a project to establish cultural directorate to represent the ministry in Syria, and they will cover the suburbs in liberated areas as well; all activities will be included, art, sports, cinema, literature, and women and youth welfare”.

“The project will be supervised by the ministry; the project study is ready, and we are awaiting the needed fund to implement it”, says Hidaya.

Bytul-Hikma is an essential project to advance knowledge and to provide a viable alternative as described by many students, who have been deprived of pursuing their studies as the war in Syria escalates.

Hanin concluded addressing Abdul-Rahman and Scheherazade “I don’t know where you are now, but I sincerely hope that your fascinating story came to an end as sweet as your souls. I hope we will meet one day, and I’ll give you back your precious books… Be safe.. Be in Love”.

If interested, you may check the Arabic Multimedia Version