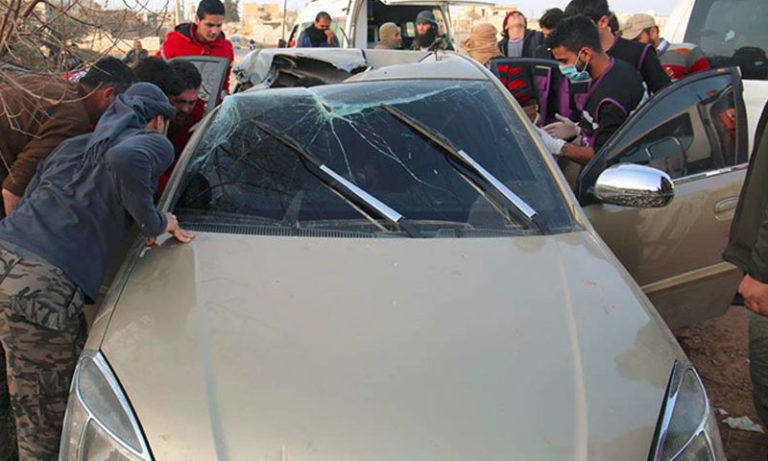 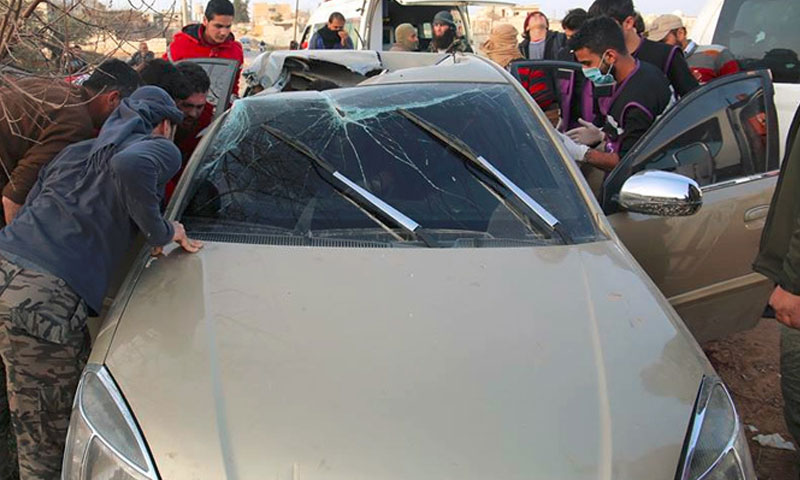 For the second time in days, the blades of the Ninja missile penetrated the roof of a car carrying fighters and leaders in the armed factions, killing them, leaving a distinctive impact without explosion, in a sign of a new approach chasing the armed factions in their last stronghold in Syria.

A few kilometers from Barisha in the northern countryside of Idlib, in which the Americans boast about their military landing at the end of October to kill the former ISIS leader Abu Bakr al-Baghdadi, a drone targeted a Jeep car, near Qibare crossroad in the countryside of Afrin, north of Aleppo, on December 7.

Photos of the targeted car penetrated from its roof were spread along with photos of the remains of the three dead people who were inside, reminding of the similar targeting of a van in the town of Atme, north of Idlib, on December 3.

While the targeted people in the new incident were not identified, activists suggested that they are leaders of the National Front for Liberation faction, which merged with the Syrian National Army under the leadership of the Ministry of Defense of the Syrian Interim Government, showing a photo of their identity card in the car, which the National Front quickly denied, describing any similar documents as “forged.”

However, analysts pointed out that this denial does not mean that the United States is not responsible. British newspaper Telegraph quoted an investigative reporter at Bellingcat website and a former infantry officer, Nick Waters, as saying that “it is possible that other US agencies, which are not under the control of the coalition, such as the CIA, may have carried out this strike unilaterally.”

Only the name Abu Ahmad al-Muhajir, which was mentioned on a paper the person was holding to pass through the checkpoints and found next to his body, was identified among the victims of the attack on December 3.

Nothing is known about the leader except that he was a trainer of the “Elite” division in Hay’at Tahrir al-Sham called the “Red Bands,” to which all special and quality operations announced by Tahrir al-Sham were associated, and its fighters received training in martial arts, by Blackwater Islamic private military company, called Malhama Tactical, founded by fighters who came from Russia and the countries of the former Soviet Union. The majority of the trainers served in the Special Forces in their countries, led by Abu Salman Belarus, a former first aide in the Russian Special Forces.

Idlib witnessed the first use of the so-called Ninja missile in February 2017, in a drone raid targeting the second man in al-Qaeda, Ahmad Hasan Abu al-Khayr al-Masri, in his car near the al-Mastumah camp in Idlib countryside.

The American Wall Street Journal, in a report published last June, explained exactly what this secret weapon, used by the CIA and the Pentagon in raids on important targets in Libya, Syria, Iraq, Yemen and Somalia, is.

These missiles are a modified version of Hellfire missiles, which are anti-tank missiles issued during the eighties and started to be used after the attacks of September 11. They carry an inert warhead, which is designed to penetrate more than 100 pounds (45.4 kg) of metal instead of exploding, to kill the target without harming civilians and nearby properties.

This missile, called R9X, is equipped with a loop of six long blades surrounding its head that are hidden and only appear seconds before hitting the target to ensure tearing everything in their way.

According to the American newspaper’s report, this weapon is used only in specific circumstances, especially when the location of an important “terrorist” leader is very precisely determined.