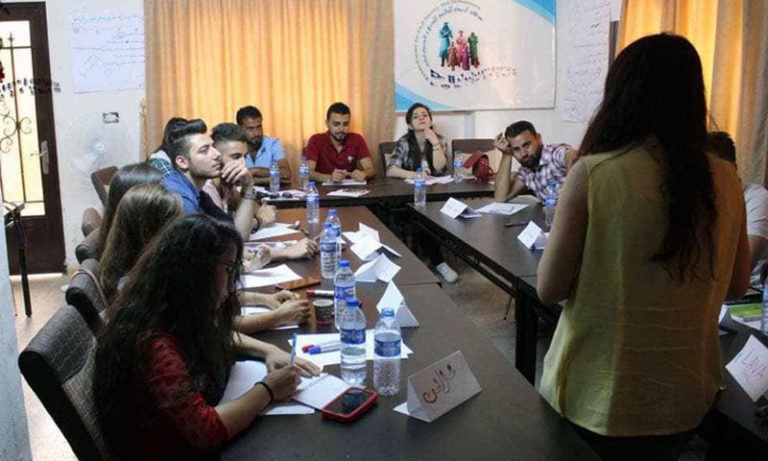 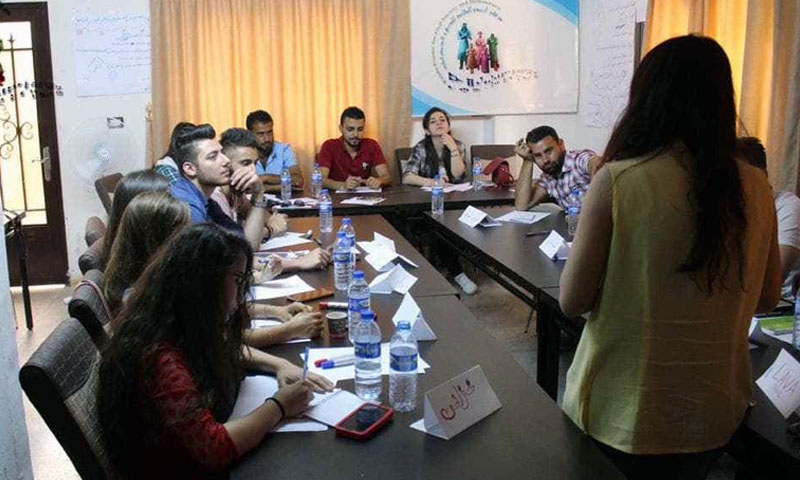 Enab Baladi – al-Hasakah | The recent military operation in northeast Syria has affected the work of the active civil society organizations there, which were tasked with bridging the gap in the provision of local services, in addition to their role in awareness-raising, education, community development, advocacy and human rights.

The military and power changes that followed the operation led civil society organizations to prioritize the provision of basic services and relief assistance, at the expense of their other areas of work.

New challenges have also emerged, threatening theses organizations’ existence and the continuity of their work, in addition to civilian activists’ fears for their lives as a result of the shifting balance of power, especially with the entry of the Syrian regime, which has not been able to control these areas for years.

The director of Eridu Center for Civil Society and Democracy, Gandhi Saadou, stressed that the work of organizations in the north-eastern areas of Syria has significantly declined following the Turkish operation, which has aggravated the existent difficulties, such as the lack of adequate and appropriate support.

Saadou explained to Enab Baladi that the activities of many civilian centers have stopped during the military operations.

In contrast, the work of some organizations specialized in providing aid and charity work has continued. These associations have played an important role, especially in light of the withdrawal of international organizations and their exit from Syria. This has in turn constituted a huge burden on the local organizations that have proven their competence and strength on the ground, he clarified.

Saadou added that the rumors about the Syrian regime’s return to those areas have raised great fear among civil society activists, especially as 90 percent of them oppose al-Assad regime.

Activities frozen and others replaced

Regarding the work of Eridu Center for Civil Society, which specializes in the areas of civic education, human rights, good governance and youth capacity development and which covers the governorates of al-Hasakah and Raqqa, Saadou pointed out that the center’s activities were affected and some of them were stopped and completely frozen. In addition, many of the activities were changed or replaced to suit the requirements of the current stage.

Saadou explained that the center is currently highly focused on the issue of IDPs. Although al-Hasakah area was previously a large reservoir for IDPs from different Syrian areas, such as Homs, Aleppo, and other regions, this matter has now exacerbated with the presence of more IDPs.

He also indicated that some of the people have been displaced from the areas between Ras al-Ayn and Tell Abyad near the Syrian-Turkish borders, where military operations were concentrated, leading to the arrival of nearly 300,000 IDPs.

On the other hand, the military operation led to the escape of many civilian activists to Kurdistan Region. Some of these activists are currently thinking of return, while others cannot, especially those who used to work in the city of Ras al-Ayn and who lost their properties, jobs and much of what they had, according to Saadou.

The director of Eridu Center revealed that the people and the organizations fear renewed military operations, especially in the areas of Khabur, Assyria, Ayn Issa and Tell Abyad, and the resulting new displacement movements.

In addition, organizations are concerned over the continuation of their work in a militarily and politically unstable environment, and the possibility of the provision of future support for them to continue their work.

Ayaz Mohammad, Program Director at GAV for Relief and Development, confirmed that there are significant impacts on the work of civil society organizations in northeastern Syria.

Mohammad explained to Enab Baladi that before the Turkish military operation, the north-eastern areas of Syria were highly safer than other Syrian areas. This has played an important role in the growing civil activities, enabling it to create pressure mechanisms on local authorities to establish a foster environment that helps to adopt the foundations of rights and freedoms.

Mohammad added that one of the main consequences of this military intervention was the withdrawal of international humanitarian organizations, which used to provide multi-sectoral services to the residents of these areas, and their failure to fulfill their humanitarian role entrusted to them in creating emergency humanitarian responses to the IDPs of the areas targeted by the military operation.

The military operations, the rivalry of the warring parties to the main inter-city roads and the recovery of ISIS’s sleeper cells have also posed risks to the lives of civilian activists, limiting their freedom of movement.

In addition, the entry of Syrian regime forces into some areas under a military agreement, whose clauses on administrative and service aspects are unclear, has had repercussions. These included the frustration of civil institutions and activists, some of whom have closed offices and burned documents related to their activities, lest they cause risks on the lives of staff and volunteers in case they reach unsafe hands.

GAV has been one of the organizations that their work has been affected. It is an organization specialized in the protection of children and women, and has been active since 2017 in the rehabilitation of the educational sector in the city of Raqqa and its countryside.

The organization has implemented projects aimed at repairing hundreds of damaged schools, as well as encouraging local people to engage in a coordinated and organized education process, in a move to counter extremism.

GAV’s Program Director insisted that these projects and many others, which the organization was about to launch in partnership with international institutions, have stopped following the military operation, which led to a decline in the chances of development and modernization of multiple sectors in the northeastern regions of Syria and the creation of sustainable stability.

The deteriorating security situation has resulted in the suspension of the work of the organization’s branch office in Raqqa, as well as significant difficulties in accessing the areas of Raqqa and Deir ez-Zor due to the recovery of ISIS cells and the associated risks of terrorist operations, such as bombings, in markets and vital areas.

Writer and journalist Abbas Moussa spoke to Enab Baladi about the impact of the new military balances in the north-eastern areas of Syria resulting from the Turkish military operation, particularly the US forces’ withdrawal, Russians’ advancement and the entry of the regime, on the work of local and international organizations in those areas.

Following the operation, most international organizations taking their permits from the Kurdish Autonomous Administration announced the withdrawal of their foreign staff through the Semalka Border Crossing with the Kurdistan Region and dismissed their local staff as part of a two-month contingency plan, after which return options will be reconsidered.

International organizations permitted by the Syrian regime, such as the United Nations with its various bodies, and the network of local organizations associated with it, did not withdraw, but responded at a limited extent.

On the other hand, some local organizations have resumed their activities and programs targeting society, women and civil peace issues, after the ceasefire agreement that stopped the military operation, with some adjustments to their programs to suit the current circumstances and the large IDP numbers.

The head of the Kurdish Future Movement, Narin Matini, highlighted the need for the continuation of the civil society organizations’ work in the north-eastern regions of Syria, defying the real dangers and serious threats following the Turkish military operation and the entry of the Syrian regime.

She stressed to Enab Baladi that it is the duty of local organizations to continue their work in all fields, especially in the legal and civil spheres, to monitor and document violations of international laws and provisions, and to send them to the concerned authorities in order to ensure that violators are held accountable and prosecuted.

Matini added that it is up to the civil movement to regulate the exercise of the civil rights of protests, sit-ins and demonstrations, and demand the international community to provide international protection and peacekeeping forces.

Matini stressed on the importance of these organizations’ support of the people of the region and communication of their voice to the world so as to realize their rights to peace, freedom and democracy.