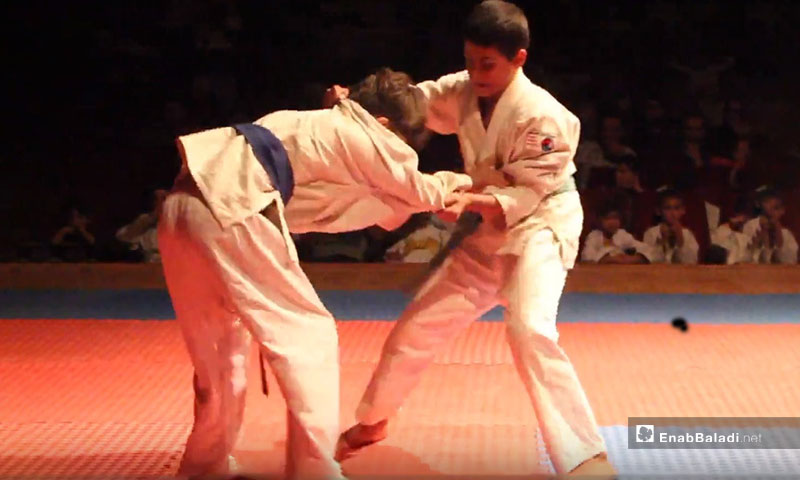 On 18 October 2019, Damascus Sports Club (DSC) held the first Idlib Judo Championship at Idlib’s cultural center. The championship was held with the participation and supervision of professional judo coaches. 90 junior judokas participated in the championship, organized on initiative and support of the director of the DSC, Khaled al-Khatib.

Al-Khatib, a prize-winning coach at national level in Judo, has been displaced from Rankos town in Rif Dimashq. “I organized the judo tournament at the club, with the aim of revitalizing the junior judo fighters and motivating them to keep practicing the sport and taking part in competitions,” al-Khatib said.

Al-Khatib, in an interview with Enab Baladi, pointed out that, “competitions in northern Syria are few. The last one was held about a year ago. Judo students need continuous competition and training to improve their skills and levels , encouraging their creative talents.”

The tournament is the first of its kind in the province of Idlib. According to the club’s director, the judo championship organizers relied on individual support and initiative and the participation of the residents and the displaced people in the region.

Mazen al-Damiriya, one of the championship organizers, told Enab Baladi that the judo championship aims to highlight the significance of the sport of judo in people’s lives especially among young men and juniors. It also seeks to improve the participant’s capacities and skills.

Al-Damiriya, a referee and coach at a bodybuilding club, added that the number of participants is 90, a number equivalent to the participants of the previous national championship, noting that all judo participants maintain a high skill level.

Mahmoud Abdulbasit al-Khatib, a judo player from the DSC, said in his interview with Enab Baladi that the tournament included participants and coaches from different ages. The tournament is important for strengthening the bodies and the resolve of the participants, especially children, according to al-Khatib.

The Idlib judo championship concluded with a ceremony honoring the winning judokas in the categories of adults and juniors. The best judo fighters were awarded with prizes, medals and trophies.

Earlier this month, a competition between bodybuilding clubs was held in Ma’arrat Misrin. The winning bodybuilders were awarded with prizes presented by the participants.

Sami Badla, one of the competition’s organizers, told Enab Baladi that it was held on request from the private clubs in northern Syria to be the first of its kind in the region. The objective of the championship is to improve the participants’ physical strength.

Azaz’s local council in the northern countryside of Aleppo announced last July the first championship of bodybuilding in the region with the participation of 80 national bodybuilders according to weight categories. The championship included three main competitions: chest, squat and weightlifting.

Opposition controlled areas including Idlib and rural Aleppo have various sports activities and at professional levels including football and martial arts. Such sport activities were absent from these areas for different reasons and now they have been revitalized with return of calm in the previous years.