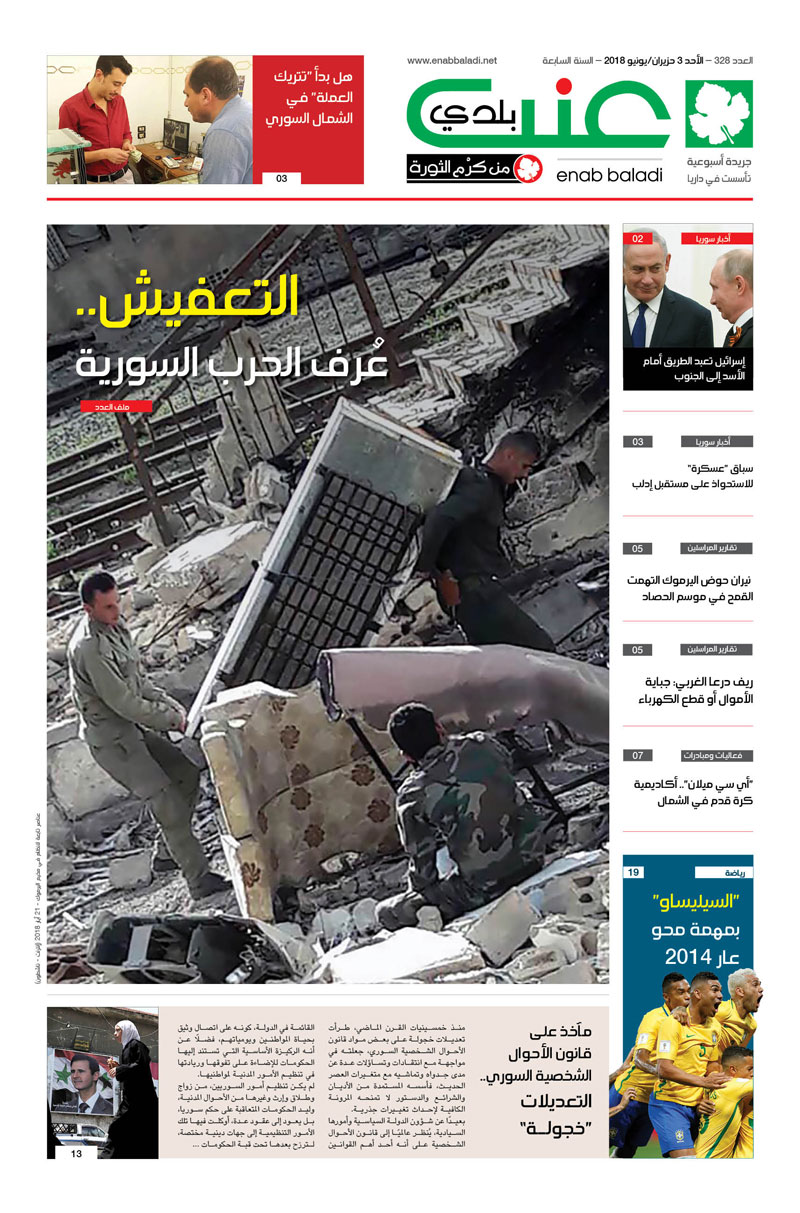 The Lieutenant Colonel Somar Zidan’s, an officer at the “Political Security” Directorate in Aleppo, death news has gone viral on “Facebook,” triggering this social media platform’s magical power of revealing and documenting the truth and its ability to bring together victims and their torturers.

Gabriel K, now based in Europe, is one of Somar’s victims when he was yet in his city of Aleppo, Syria, describes the manner through which he learned about the death news: “It was a mere coincidence. I found the Lieutenant Somar’s picture on Facebook. Somar who enjoyed torturing people, my friend and I included, in the Political Security Directorate [. . .]. There under the picture, died, was written.”

When he tortured Gabriel, Somar was a Lieutenant. When he was killed, he became a Lieutenant Colonel. While dead, he was upgraded to the level of Honorary Colonel, applying the military rule which necessitates upgrading the Syrian army’s officers to honorary ranks after their death.

Both the picture and the news take Gabriel back many years in time, to painful moments and to his city Aleppo, which he was compelled to flee after being tortured by Zidan:

“Looking at his picture, I could hear his voice. It is just weird that he was keen to post pictures in which he laughed only, though I was sure that he spent the last seven years of his life and by virtue of his work, which he mastered and sadistically enjoyed, among the bodies of the people, who he tortured, beat and humiliated. It is bizarre that he did not post a single picture of his true self on Facebook, one that shows his daily life and personality.”

Gabriel continues to unfold his story, showing a great humanitarian sense and awareness of the monstrosity of torture as a crime and its role in the destruction of human beings and homeland:

“Lieutenant Somar Zidan, from the Political Security Directorate, who tortured me for long hours in his room [. . .] a part of me wished to meet him at the court, before he dies. I wanted to face him without a tool of torture in his hand, without chains, electricity cables or canes [. . .] and to tell him how criminal he was against us as humans, against our country, future and life, which he destroyed with other criminals like himself.”

On “Facebook,” Basem S has also made a testimony of what Somar has done to him:

“Somar arrested me in 2012 and supervised my torture at the beginning of the investigation [. . .] He appropriated my Citroën car and drove it for four years. That night, he got me out and took all my clothes off. Then he hanged me from the ceiling by the wrists, [a method called shabeh], and started to beat me with an iron pipe, which he called Lakhdar Brahimi.”

Basem lost conscience and woke up in the cell all in blood.

Curious, I browsed the security officer’s posts and pictures, for he was an example of the torturers and perpetrators who tormented hundreds of thousands of Syrians and killed dozens of thousands under torture since Assad family came into power in Syria.

I was one of those who survived. Being tortured at the Fourth Division, I was shocked at the torturers’ grudge and the brutality’s extent, which almost equaled my body pain. Ever since, I have been trying to understand how this group of people really think. Why do they hold such a grudge? How did they reach such a progressed stage of barbarism and inhumanity? Who created them in our Syrian society? What mechanisms did they follow, and from where did they get their massive experience to reach that “great success” in turning a human being, just like us, into a killing and a torture machine?

After a simple search process, I found Somar’s “Facebook” page and started browsing it. He introduced himself as having a law degree and mentioned nothing about his work.

The first post to attract my attention was a confession of using barrel bombs and chemical weapons, as well as an invitation to use chemical weapons against all Syrian who do not show loyalty to Bashar al-Assad, the political opposition figures inside and outside Syria:

“Barrel bombs are harm (forbidden), artillery is haram, the rocket is harm. However, chemical weapons are halal (permissible), halal, halal against the history’s bastards..reaching the smallest of these rats..of opposition figures inside and abroad.”

Somar Zidan is a Lieutenant Colonel under the Political Security Directorate in Aleppo, which organizationally follows the Ministry of Interior, accordingly the Syrian government and practically the Presidential Place and specifically Bashar al-Assad. This means that the President, the Prime Minister and the Minister of Interior are all legally responsible for his crimes.

His account is filled with naïve pictures and captions about love, women and life in general, as well as mockery of his regime’s victims, the children of Ghouta included. He wrote posts that revealed his political, “humanitarian” and social attitudes.

Somar is a pro-Resistance Axis figure, he loves Putin and hates Mahmoud Abbas, Arabs, Europe, America, Saudi Arabia, Turkey and Qatar. He is, for sure, a loyalist to Bashar al-Assad, for in one of his posts after the Syrian regime had control over Aleppo, fully backed by Russia, he said that “Aleppo is Syrian and Assadist.”

Somar also hates religions such as Islam and Christianity. One of the Christian detainees (G K) who were tortured by him, said that Somar has told him about his regime’s opinion of Christians in Syria. Somar said that “Do you really believe that there are Christians in Syria? Do you really believe that we like you? We keep you here, simply because I can bring any women from the street to my bed with her family’s knowledge, while no one would have the courage to say a word. You are under our shoes.”

Somar shows his pride in the Syrian heritage, thousands of years old, and morals and values in a song by Fairuz. At the same time, he posts a joke, consisting of a number of violations that express a racial culture:

“A plane crashed and only three hareem (women), survived: Saudi, Lebanese and Sudanese. They went on top of its the fuselage. Waiting to be saved, the Saudi woman wore all the gold she possessed to be saved before others. The Lebanese took all her clothes off to tempt those who will come to save them to start with her. The Sudanese did not know what to do, so, on her buttocks, she wrote: The black box.”

The joke was disgustingly racial in terms of human’s pigmentation; it also labeled them according to their countries derived by an ignorant generalization, for all Sudanese women are ugly and poor and all Lebanese women use their bodies. This is in addition to the word, Hareem, [derogative term used in referring to women] which strip women of their humanity.

Somar is inspired by Ziad Rahbani, Duraid Lahham and Mohamed Hassanein Heikal, as well as a number of fabricated pictures and quotes, including a photoshopped caricature of artist Mwafaq Katt.

Even his choice of songs was violence-related, for he posted a song by Julia Boutros and wrote: “Open fire and show no mercy, for in the battle fields your bullets have spoken.”

Somar, of course, has expressed his opinion of the Arab Spring revolutions by cursing Mohamed Bouazizi, the victim of the Tunisian regime, and blamed him, showing a foolish comprehension of the reason why Bouazizi set himself on fire:

“You have burned yourself because of a slap on the face..

And people are doomed due to your stupidity”

In his office, Somar hangs a picture of “Yin and Yang,” a Chinese philosophy that explains the origin of the universe since eternity and expresses the duality of our world. Although that I doubt that he understands what the image means, it might be the most truthful description of this criminal’s double life. 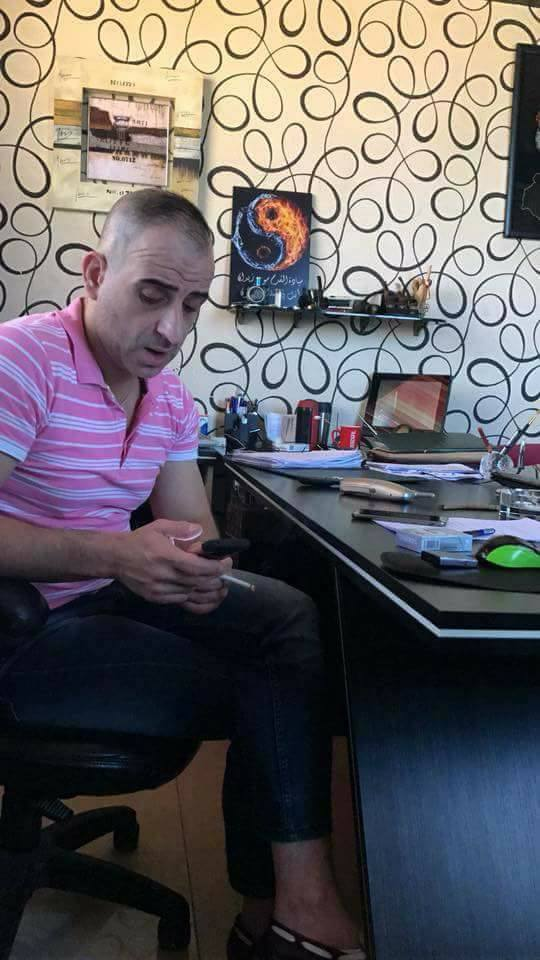 You might share one of Somar’s characteristics, one of his inspirational figures or ideas. Nonetheless, be careful as not to share all these with him; do not be Somar!