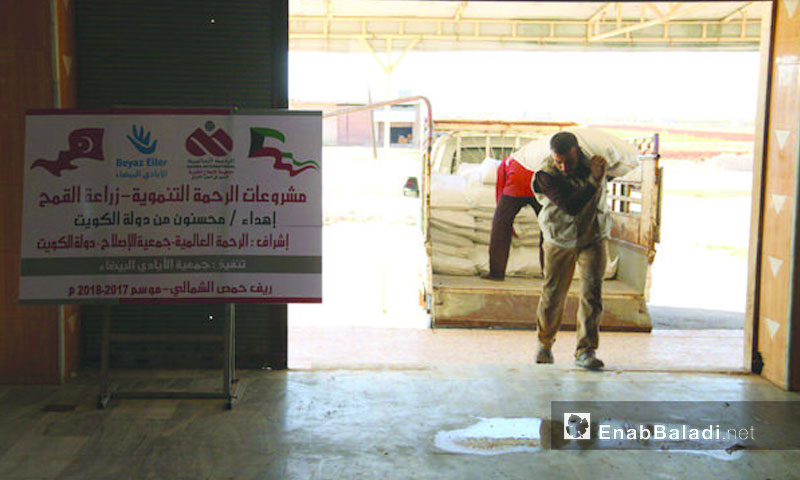 Once upon a time, there used to be a strategic wheat yield in Syria. However, the war turned Syria into an importing country after it was a self-sufficient one. This is the first idea that comes to the mind upon thinking of the Syrian wheat dilemma for there is a secretive deterioration which centralizes on the lack and the loss of some of the local varieties of wheat, a marked decrease in quality and an increase in resorting to a mixing process.

The years of war have played a role in destroying local and international agricultural research centers in Syria, which had the responsibility of preserving the Syrian wheat strains.  This triggered the General Organization for Seed Multiplication affiliated to the Syrian Interim Government to launch a project that seeks to preserve the pre-existing varieties from deterioration, according to what Maan Nasser, the Director of the Organization, has told Enab Baladi.

The genetic mixing of Syrian soft and hard varieties of wheat motivated the concerned entities to intervene to preserve, purify and multiply them. To do this, the Syrian Interim Government established the General Directorate of Scientific Agricultural Research.

Last week, the General Directorate’s research team, who is responsible for follow up, implemented the second phase of its research experiments on varieties through wheat strains breeding and selection programs. In 2018, 12 types, varieties, of Syrian wheat have been planted.

The Director of Seeds Organization in the Interim Government, Engineer Mohammad Hassan, told Enab Baladi that the Ministry of Agriculture in the Government is conducting experiments to preserve the wheat strains from being mixed with low-quality ones.

He explained that, at the time, they are trying to preserve the pre-existing varieties only. Producing new varieties demands massive resources and many years of work, no less than ten years of experimentations, selection and elimination to get a type that has the needed features to increase production and resist unnatural conditions, such as drought, lack of rain and diseases that may affect it, and then achieve a type that suits the region, its climate and effective factors.

This was confirmed by the Director of Seed Multiplication Organization, Maan Nasser, who said that breeding new varieties is suspended for the now and that the organization is preserving the pre-existing types, trying to purify and not to mix them with other types. He pointed out that so far, 17 types of wheat have been preserved and about 9400 tons of seeds have been produced in cooperation with donor entities.

The “Svalbard” Seed Cellar is a safe seed bank located on the Norwegian island of Spitsbergen, near the Longyearbyen town of the Arctic Svalbard archipelago, and is specially designed to keep the seeds safe for use after disasters.

The Vault was officially opened on 26 February 2008. It is believed that the vault contains more than 800 seed samples taken from different countries around the world, which are saved in an underground cave.

Producing new varieties of wheat was the responsibility of Agricultural Research Centers that existed in Syria before 2011, in addition to the American International Center for Agricultural Research in the Dry Areas (ICARDA). The Center began its work in Syria in 1977 and sponsored agricultural research and explorations of environmental, technical and economic factors in the developing countries; it also seeks to develop sustainable agriculture and improve it to limit poverty, hunger and achieve food security for citizens.

In cooperation with “ICARDA,” research centers managed to produce new varieties of wheat before 2011. The new types have features that suit the region and distinguish them from types in other regions, for they are specialized, studied and naturally and artificially selected to cope with Syria’s nature, according to what Mohammad has said.  He explained that each part of the world has specific varieties that suit its nature and climate.

The Director of Seed Multiplication Organization said that “ICARDA” produced varieties of wheat which comply with the Syrian environment; they are highly productive and drought, as well as diseases resistant.

“ICARDA” located its headquarters in Tal Hadiya, in the vicinity of Aleppo city. When the conflict began, the Center transferred the plants’ genes, which were kept in the Genes Bank, to “Svalbard” Seed Cellar or the “Doomsday Vault” in Norway, according to the Director of the Center in Syria, Mahmoud al-Solh in 2014.

Al-Solh said that most of the genes were transferred from the Syrian gene bank to Norway, 116,484 genes, more than 80% of the total.

He stressed that “the step aims to ensure futuristic food supplies to provide the developing world with food security since wars and conflicts usually lead to the disappearance of plant varieties that might be distinct for their ability at increasing production. These varieties can be retrieved from the genes bank.”

This confirms that Syria did not actually lose the varieties and that they can be retrieved. However, the Center delivers the varieties only to a trustworthy party.

Why Is the Syrian Wheat so Important?

“ICARDA” worked to produce new varieties of the Syrian wheat under different entitlements, especially that the Syrian wheat is considered as having high quality and among the best types in the world. The hard Syrian wheat, for example, is suitable for making pasta because it contains proteins that other types do not.

Wheat is widely spread in Syria, both hard and soft varieties. The hard wheat is characterized by large grain size, crystalline shape, yellow amber color and ability to adapt to the different environments in the Mediterranean basin. Soft wheat is suitable for making bread, biscuits, and cakes.

The most important wheat varieties that exist in Syria, according to the “Directory of Wheat” issued by the General Commission for Scientific Agricultural Research in 2011, are “high yielding wheat varieties” and “local and old varieties,” which resulted from studies and experiments.

The varieties are resistant to environmental conditions (drought, diseases and especially wheat leaf rust); they are also distinct for high yield and wide acclimatization in irrigated environments. Most of the grains are characterized by good technological qualities.

The soft wheat varieties, include “Sham4, Bohouth4, Sham6, Bohouth6, Sham10, Duma2, Bohouth8, Golan2, Sham2, Maxiback and  Florence Aurora.” Most of these varieties are distinct for their high yield, adaptation to dry environments, and having good manufacturing qualities, such as large grain size.

The war led to a decrease in the wheat yield almost to the half. After it reached 3.4 million tons in 2011, it decreased to 1.7 million tons in the last season, according to the Syrian regime. However, UN’s Food and Agriculture Organization (FAO) estimated the yield of 1.3 million tons only, with a 55% decrease from the 2011’s yield.

The Director of the Seed Organization Hassan Mohammad attributed the deterioration in wheat production to a number of factors on top of which are the migration of the farmers, who abandoned agriculture, the lacking  production’s needs and their prices being on the rise all the time, including fertilizers and fuel, especially that most of the wheat used for production is irrigated one depending on wells, which need fuel to be operated. In addition to this, most of the irrigation networks have been damaged under the regime’s shelling.

Mohamed pointed out that the absent of markets, to sell the produced wheat, was one of the reasons why farmers in the eastern regions changed their crop policy. They moved on to grow more demanded, more profitable and less expensive crops such as coriander and aromatic substances.

He also stressed that the quality of the seeds has also played a role in the deterioration of production. The improved seeds which usually give more yield no longer exist and farmers are planting stored, mixed and impure seeds, the thing which leads to low production.