Projects to Preserve Wheat varieties and to Produce Potato Seeds 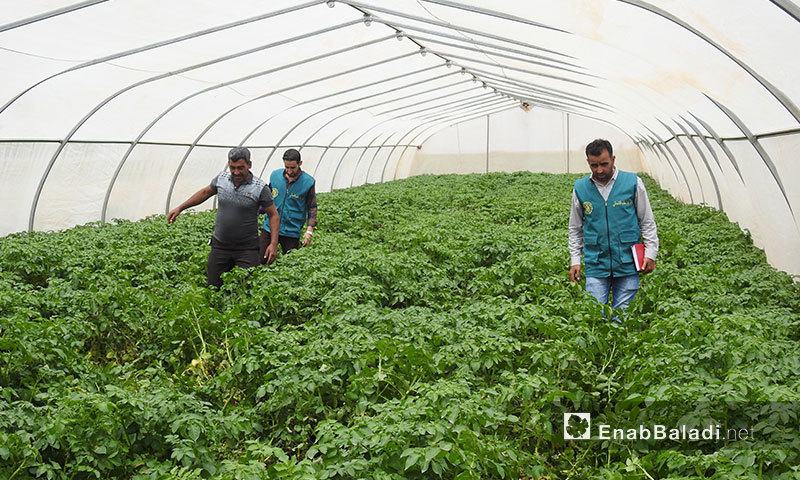 The Syrian wheat is known for its quality and high yield, but the Syrian wheat varieties have deteriorated due to the conditions that the area has witnessed, especially at the level of type and production’s purity.

The foundation has planted 16 local varieties, already planted and high-yielding seeds in the area, according to what, Ahmad Khamis, the director of the Seed Multiplication Branch in the northern countryside of Aleppo, has told Enab Baladi.

Khamis Added that the project aims to retrieve the purity of the wheat verities and their high productivity; it also aims to overcome the decline that impacted these varieties due to the conditions suffered by the area.

The varieties that the project aims to preserve and multiplicate are the following: “Duma1,” “Bohouth9,” “Sham11,” which are of the hard type, in addition to “Sham6,” “Sham8,” “Sham10,” and “Sham12” which are soft wheat varieties.

According to the project’s director, the foundation has communicated with several local and international entities, from which it received a little amount of seed (breeders seed) in the first stage of the project.

The seeds were planted under the supervision of technicians and specialists, seeking to multiply them, preserve their high quality and to reach the stage of high yield.

The World Food and Agriculture Organization (FAO) estimated that reforming the agricultural sector in Syria would cost 11 to 17 billion dollars.

The organization’s evaluation stressed that Syria has, due to war, lost the 16 million dollars that it used to get from the agricultural sector, which is yet a crucial economic factor, for it provides 26% of the GDP, which creates a space of safety for about 6.7 million Syrians, including IDPs.

It warned against the negligence of the productive agricultural areas that will force more people to leave the rural areas, thus, making the agricultural revival harder, longer and costlier.

Another Project to Alleviate the Farmers’ Burdens

The seed multiplication branch in the northern countryside of Aleppo is working to plant 3300 hectares in the area under its supervision, which expand from Jarabulus, in the east, to the city of al-Bab, in the west.

The project is conducted in cooperation with the “Qatari Red Crescent.” It provides farmers with financial support in the form of “interest-free loans,” about 500 dollars per Hectare for irrigated fields and 175 dollars for rain-fed areas.

The project aims to provide the farmers with pure and healthy seeds; it also seeks to alleviate their suffering in relation to securing seeds and offering them monetary loans to buy irrigation water and pesticides, which has the ability to increase the level of production, according to Ahamd Khamis.

According to al-Ahmad, the money will be taken back from the farmers in the form of wheat, for a price higher than that of the market, in addition to 5% increase in the original price as a reward for the multiplication of the seeds.

The project seeks to provide the area’s needs for the next year, as to cover the necessary amount of seeds.

The General Organization for Seed Multiplication, on its Facebook account, said that it has contracted with 887 farmers, according to its conditions and standards.

The contracted area is about 3300 hectares, which is expected to give about 11 thousand tons of the good-quality improved and sifted wheat.

Along with working to improve the wheat plantation and production, another project seeking to locally produce the potato seeds started as to decrease dependence on importation and to chive self-sufficiency in the tree areas, the northern and the western countryside of Aleppo, as well as Idlib governorate.

Under the efforts of the National Project of Potato Seed Production in northern Aleppo, 60 net houses were planted in the Hor al-Naher, Aleppo, over an agricultural area of 45 dunums.

The project is considered a chance to turn the city of Mare’ in rural Aleppo into a major center for producing high quality potato seeds, which guarantee a massive yield and good financial gains in the way to achieving self-sufficiency.