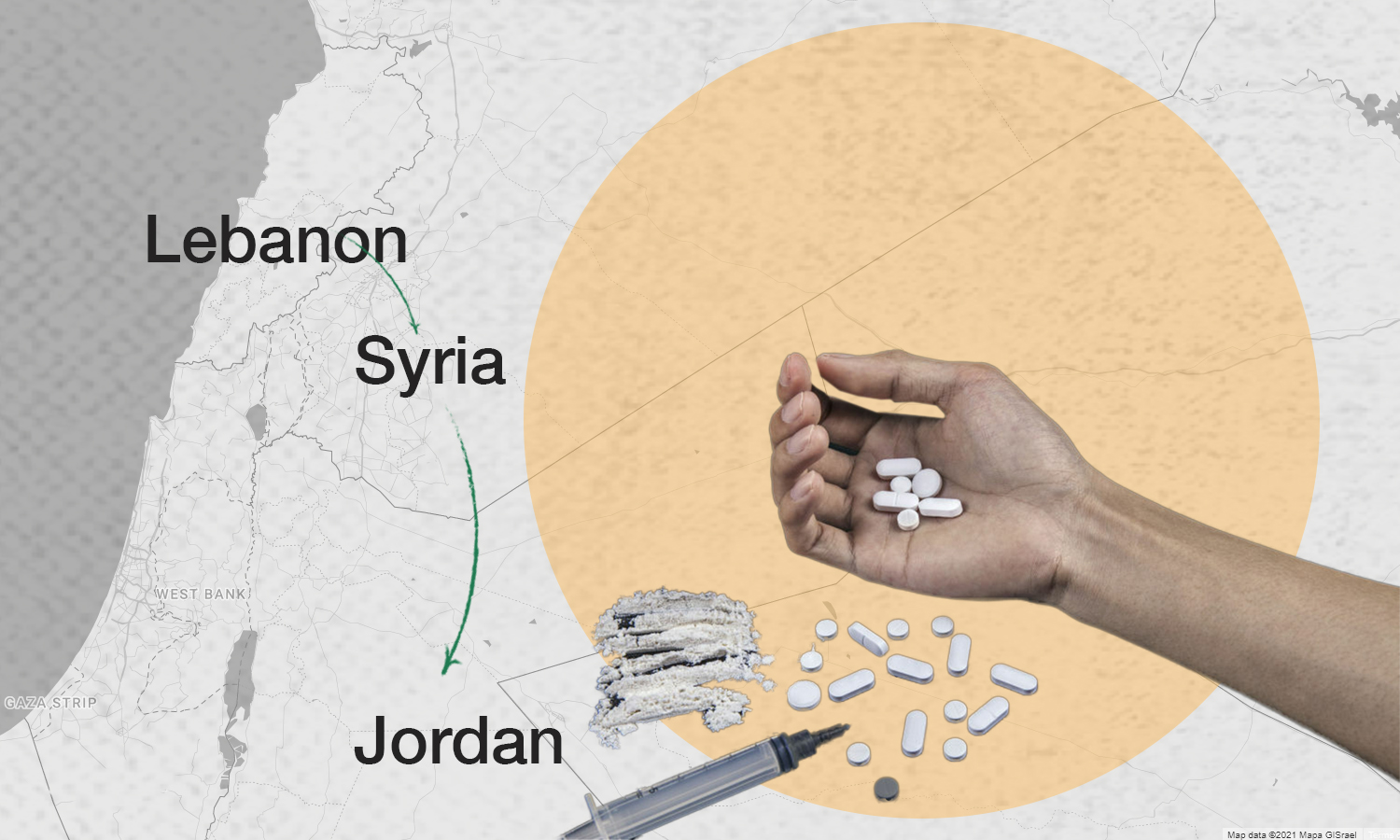 The Jordanian army has made frequent announcements about thwarting drug trafficking groups coming from Syria.

Drug shipments involving large quantities of hashish and various kinds of narcotics go through a long journey. The shipments depart from Hezbollah’s areas of influence in Lebanon and enter Syria to reach As-Suwayda, southern Syria, near Jordan. These shipments finally arrive at their terminal locations to be delivered to drug dealers in Jordan or seized by the Jordanian security forces.

Enab Baladi did supplementary research to find out who are the parties involved in drug trafficking activities and how smuggling is carried out on the Syrian lands.

Smugglers in the grip of Jordanian security

On 8 February, a reliable military official in the General Command of the Jordanian Armed Forces (JAF) stated that “the JAF, in coordination with the security services, foiled an attempt to smuggle large quantities of drugs into Jordan,” as published by the JAF on its official Facebook page.

The military official added that the Jordanian forces had been tracking drug trafficking networks for a while. In the end, the forces were able to seize large quantities of drugs of various kinds, including hashish and amphetamines, before being smuggled into Jordan.

On 30 January, the Anti-Narcotics Department (AND) in Jordan said that it thwarted an attempted infiltration by a group of drug smugglers from Syria to Jordan at one of the countries’ border points.

The military official in the JAF pointed out that Jordanian troops clashed with drug smugglers on the border with Syria. As a result, the smugglers retreated to Syria.

After the JAF searched the area, the military added that they seized around 362 packs of drugs and transferred the confiscated substances to the relevant authority departments.

Enab Baladi contacted one smuggler online, who has close links to Hezbollah in the governorate of As-Suwayda.

Speaking on the condition of anonymity, the smuggler told Enab Baladi that drugs are being smuggled first from the Baalbek region in Lebanon to the highlands of Qalamoun and then to the As-Suwayda governorate through vehicles backed by armed members. These vehicles could pass through the Syrian regime’s checkpoints without being questioned or inspected about their shipments.

He continued, “The drug delivery vehicles arrive in As-Suwayda. Then, drugs are stored in warehouses, waiting for the appropriate time to be smuggled to Jordan.”

Winter is the best time for smuggling drugs

According to the smuggler, drug trafficking often occurs in winter due to the bad weather conditions that smugglers use to hide from the Jordanian security forces.

The smuggler pointed out that the foggy weather is optimal for conducting cross-border smugglings.

Several people conduct smuggling operations carrying bags packed with drugs. Then, they cross the border to deliver drugs to Jordan. There the drug dealers sell them for US dollars, according to the unnamed smuggler.

The smuggler added that he carries between 20-30 kilograms of drugs every time.

The smuggler highlighted that one kilo of hash costs between 250,ooo to 350,000 SYP (about 100 USD) in As-Suwayda “depending on the quality of the material,” while hash is sold for over twice this price in Jordan.

In addition to the drugs coming from Lebanon, small quantities come from the Syrian coast, according to the smuggler. He said that they are lower quality than the Lebanese ones.

Enab Baladi learned from four separate local sources, in the city of Salkhad in As-Suwayda– Enab Baladi refrained from revealing their names for security reasons– that the smugglers’ infiltration attempts are taking place at illegal crossings of Wadi Khazmeh on the Syrian-Jordanian border, south of As-Suwayda.

The sources pointed out that violent clashes between the Jordanian border guards and some smugglers have recently taken place across the border.

Members of Lebanon’s Hezbollah are not the only ones involved in the drug trade; there are also drug dealers from As-Suwayda, according to the sources interviewed by Enab Baladi.

The sources mentioned three common names in this illegal trade in the governorate of As-Suwayda.

-Faris Saimoua, from the village of Arman, south of As-Suwayda, is considered one of the major traffickers of narcotics. He formed an armed group with the support of the Military Security branch.

-Hussein al-Wahban is an Arab Bedouin, based in al-Haroubi neighborhood, north of As-Suwayda. He is a drug dealer, enabled by the strong ties he has with officers of the Military Intelligence branch.

-From the Bedouin Arab community, Jamal al-Balas is responsible for trafficking the narcotic drugs (hashish) north of As-Suwayda. In the Lajat area, he has strong ties with the Military Intelligence officers and the Lebanese Hezbollah members.

The Military Intelligence branch, led by Brig. Gen.Luay al-Ali, since 2018, is known for taking full control of the southern governorate of As-Suwayda. Al-Ali is a figure of significant influence and strong links with Tehran. It is worth mentioning that he has been designated on the European, Canadian, and UK sanctions lists.

The drug smuggling caravans belong to the notorious drug dealer Noah Zuaiter, the unnamed source told Enab Baladi. He added that narcotics are being smuggled from the Lebanese Bekaa region.

Zuaiter is wanted by the Lebanese security services and the International Criminal Police Organization (INTERPOL). He is accused of committing murders and kidnappings. However, Zuaiter moves freely in Syria, as he appeared in 2015 in Qalamoun on the Syrian-Lebanese border and in 2019 in the capital, Damascus.

Italy is another trafficking route

On 21 December 2020, Italy’s financial crime police said that the vast seizure of amphetamines revealed the scale of illegal drug production in Syria.

In a televised report, BBC displayed exclusive footage of the incineration of amphetamine pills seized by the Italian police.

In the form of 84 million Captagon tablets, the drugs that together weighed 14 tons were worth about one billion euros (1.1 billion USD). The drugs came from the Syrian port of Latakia in order to be smuggled to Libya. Then, they were seized in Italy, the BBC’s correspondent reported.

The report pointed out that the Syrian regime and its ally Hezbollah were deep in the drug trade, providing “a major funding source.”

In general, Captagon is used recreationally in the Middle East. However, fighters in Syria use it to quell their fears, reduce the need for sleep, and gain the illusion of invincibility on the battlefronts.