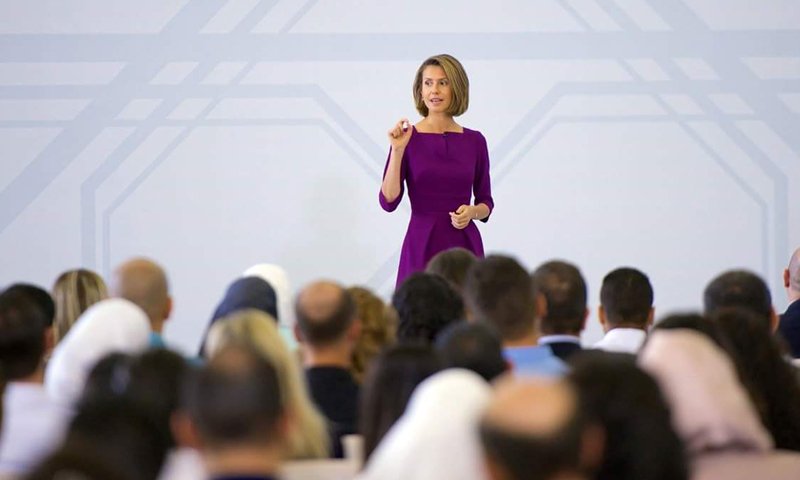 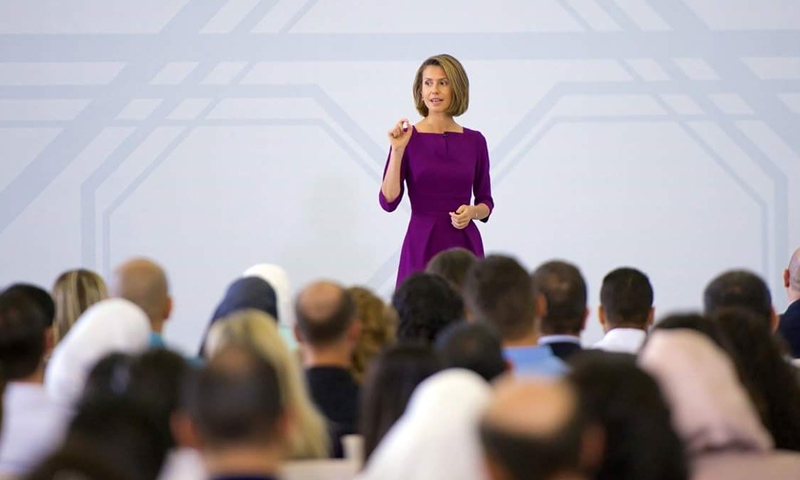 The role of the Syria Trust for Development organization (STD) has grown in the Syrian regime-controlled areas remarkably since the beginning of 2020.

The STD defines itself as a non-profit and non-governmental organization, but it is directly linked to Asma al-Assad, the wife of the head of the Syrian regime, Bashar al-Assad.

Syrian people call the STD “the Syrian First Lady’s organization” because Asma al-Assad holds the position of the chairperson of the board of directors.

The growing activities of the STD coincided with the larger political role Asma al-Assad is playing.

These activities were also accompanied by many “firsts” in Syria, including the banner size photo of Asma al-Assad that was displayed just next to one of Bashar al-Assad during an event in the province of Homs in central Syria.

In addition, portrait pictures of Asma al-Assad are appearing next to Bashar al-Assad’s in the offices of ministers.

All of the above raises questions about whether these interlinked developments fall within “the modernization of the pillars of power” or can be seen as an indication of the emergence of a new political class in Syria led by Asma al-Assad.

Asma al-Assad, who was portrayed as “a symbol of progressive change” in the ruling family, established several government-registered NGOs after she married Bashar al-Assad in 2000. Besides, al-Assad encouraged the establishment of other organizations.

Then, she merged these organizations into the STD in 2007. Since then, the STD has become one of the Syrian regime’s most “valuable” public relations projects, oriented toward the West and the international community, according to the Role of Philanthropy in the Syrian War study conducted by the researchers of Omran Center for Strategic Studies Ayman El-Desouki and Sinan Hatahet.

El-Desouki told Enab Baladi that the STD has played a role in enhancing the Syrian regime’s survival strategy.

The STD continued to play these roles after the outbreak of the popular revolution in March of 2011. The STD competed with the roles played by some state institutions with respect to the provision of social welfare services. The STD is also trying to fill in the gaps created between the Syrian government and civil society, according to El-Desouki.

He added that “the role of the STD was and is still limited to sustaining the survival of the regime, by strengthening its ability to face the challenges.”

Founder of All 4 Syria media platform and pro-opposition journalist Ayman Abdul Nour believes that the STD is using its role in distributing humanitarian and medical assistance in Syria to “earn loyalties and sympathy of people,” in addition to “gathering security information and defending the Syrian regime.”

The total value of the UN-led humanitarian efforts in Syria has amounted to nearly 12.1 billion USD since 2012. About 4 billion USD has been allocated to Syrian regime-controlled areas.

The United Nations (UN) agencies entered into a partnership with at least 128 Syrian NGOs, including the STD, according to the study of researchers El-Desouki and Hatahet.

In 2010, the STD became “the most important Syrian non-governmental organization in terms of financial and human resources. The STD depicts itself as an incubator for all sectors of civil society.”

Ayman El-Desouki said that the STD was used within the context of the “power center” campaign in the ruling family and excluding competitors. This is evidenced by its work to fill the void left by the dismantling of the al Bustan Charity networks of Rami Makhlouf, the Syrian businessman and the cousin of the regime’s president Bashar al-Assad.

Makhlouf has butted heads with the Syrian government since it took over the al-Bustan Charity– “the humanitarian facade” of Makhlouf’s work over the course of the Syrian war–and disbanded his armed group.

Surprisingly, the STD earmarked eight billion SYP (about 2,640,264 USD) from “public donations” to compensate those affected by the fires on the Syrian coast after Makhlouf announced his donation of seven billion SYP (2,310,231 USD) of his seized funds for the same cause.

Makhlouf later retracted, saying that his role is “complementary and not competitive.”

He pointed out that he would donate the money to the families of “martyrs, the wounded and some poor families in all Syrian provinces,” a role that the STD would play via one of its projects as well.

El-Dessouki told Enab Baladi that, in addition to its previous roles, the STD is used to restore the popular base loyal to the regime. The STD, via its branches and subsidiary institutions, links this base with a network of social services.

Asma al-Assad went to the Syrian coast after the fires. She also sent letters in her handwriting to those affected by the fires. In recent months, she has been “actively” engaged in many workshops and meetings, including “Jarih al-Watan.”

Researcher Ayman El-Desouki believes that the Syrian regime employs the STD to break international and regional isolation through many diplomatic efforts such as “aid distribution, conferences, and organizations.”

The STD won the international arbitrator’s rank in the elections of the International Evaluation Body of the United Nations Educational, Scientific and Cultural Organization (UNESCO) on 17 December 2020.

Founder of All 4 Syria media platform and pro-opposition journalist Ayman Abdul Nour said that the  STD is sending people to Europe to convey the regime’s narrative, in particular about sanctions, under the veil of “civil society” given that government officials cannot do this.

In parallel, El-Desouki said, the STD is used internally to “promote” the name of Asma al-Assad inside the popular base of the Syrian regime and try to market her political ideas and projects within the Syrian community.

El-Desouki warned that the STD is the largest body, but “it is not the only one through which Asma al-Assad tries to create new leaders for the next stage, more acceptable to Syrians and the international community.”

On the other hand, Abdul Nour believes that the “unusual” activities of Asma al-Assad, independently or through the STD, indicate that she will be a back-up presidential candidate in the event of a Russian-American agreement to prevent Bashar al-Assad’s candidacy.

Abdul Nour believes that “al-Assad cannot be left with one choice, either me or we leave the government. That is why the regime is trying to market Asma al-Assad, provided that it is a successful alternative to stand in the way of any opposition figure in the elections,” he said.

Asma al-Assad’s actions prompted the US administration to impose sanctions on 22 December 2020, including Asma al-Assad and many of her family members, namely Fawaz al-Akhras, Sahar Otri al-Akhras, Firas, and Iyad al-Akhras.

The former US special envoy to Syria, Joel Rayburn, said in a telephone press briefing on 23 December 2020 –which Enab Baladi obtained a copy of–that the sanctions were imposed on Asma al-Assad’s family because they are attempting to control more assets and resources from the heart of the al-Assad regime’s mafia. They also became politically active and central to the al-Assad regime’s efforts in the context of its ongoing mobilization of resources to continue its war against the Syrian people. 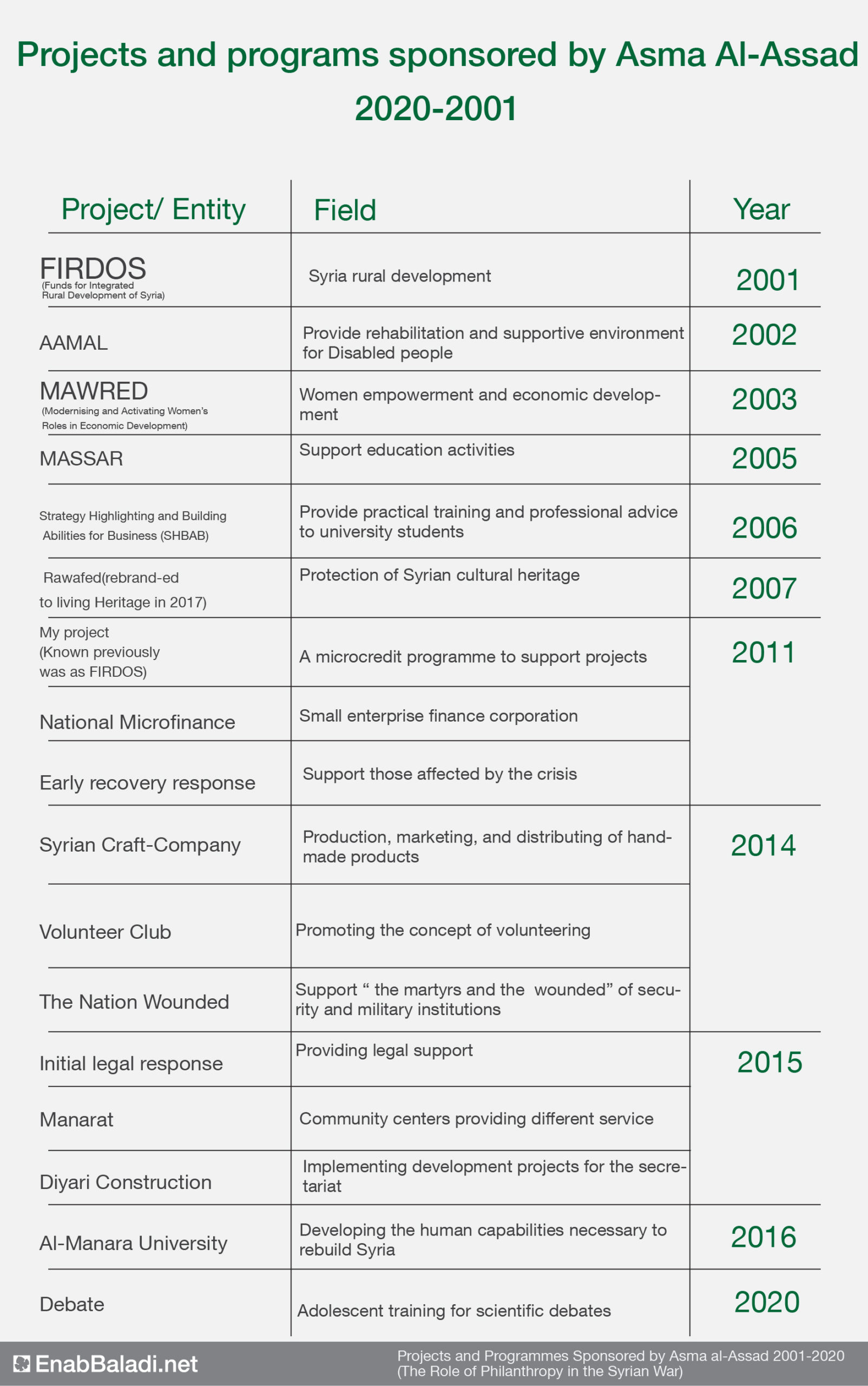