Red Crescent accused in northern Syria of agency for regime 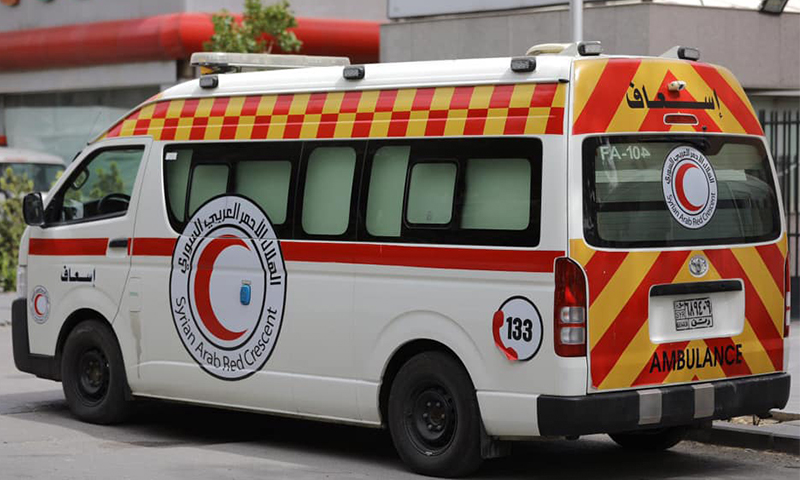 Several local councils of cities and towns in the countryside of Idlib, northern Syria, called for boycotting the Syrian Arab Red Crescent (SARC) and accused it of siding with the Syrian regime while initiating formal procedures to ban the organization’s activity in the region.

The local councils of Azmarin, Kafr Takharim, Ras Elhisn, Harem, Sarmin, Khan al-Sabil, Darkush, and al-Janudiyah in Idlib announced their refusal to cooperate and work with SARC, calling for its team expulsion and ban of its activities, as well as taking appropriate measures against them. Likewise, the syndicate of physicians in liberated areas in northern Syria took the same position on 7 March and demanded medical professionals to cut ties with the organization.

These anti-SARC positions in both Idlib and its countryside came in the light of accusing SARC of transporting regime forces and pro-regime militias members to battle fronts in the organization’s ambulances, as well as participating in their funerals during the recent military campaign launched against Idlib.

The Ministry of Justice affiliated to the Salvation Government in the region responded immediately to these calls, on 14 March, and announced in a statement issued by the Ministry’s Attorney’s General office suspending the organization’s activities until the completion of investigations and trials, based on the charges of implementation of mock projects and financial corruption.

The ministry of justice decided to prosecute those involved in the aforementioned charges, and issued arrest and summoning warrants against the involved parties.

It also decided to hand over public property belonging to the SARC branch to a supervision committee formed by Idlib’s Health Directorate, the Syrian Civil Defense and the physicians syndicate, to follow up the work progress and preserve these assets until issuing a verdict.

Enab Baladi asked a SARC employee in Idlib to comment on these recent events, especially with regard to the video that went viral on social media, showing the organization’s ambulances transporting some members of the regime forces.

The employee, who preferred to remain unknown due to his organization’s policies, refuted these accusations and denied the validity of the video, saying that the vehicle in the video does not carry SARC’s logo and protection badges.

He also pointed out that their vehicles are distinguished from other organizations’ vehicles by certain badges and lines, namely a red crescent on a white background surrounded by the phrase of (Syrian Arab Red Crescent) in Arabic and English.

The employee also denied what was translated from Turkish media, namely from A Haber channel after airing the video, explaining that the accurate translation of what has been said in the recording is: ‘members of the Syrian regime were transported in ambulances’, without stating that they belong to SARC.

However, he alluded to the possibility where some volunteers can make individuals mistakes, adding that SARC and its volunteers and workers constitute a small part of this society. So, naturally, there might be some individuals who violate the principles of the international organization through their abusive practices. However, in case of such violations, the organization suspends the involved parties.

According to him, many “baseless and inaccurate accusations have been levelled at the organization,”, which may create the possibility of endangering its volunteers’ lives,” considering whoever promotes these rumors is committing a “war crime” against humanitarian workers and jeopardizes their lives.

The basic principles and human values, ​​according to which the SARC operates, requires form its staff or volunteers to support and defend individual and social values ​​that encourage human rights respect and stimulate joint action to find solutions to society’s problems. Thus, the organization’s doctrine is based on principles of humanity, impartiality, neutrality, independence, volunteer service, unity and universality.

Enab Baladi conducted a survey with a group of citizens and activists in opposition held areas where SARC operates; the majority of the respondents expressed their rejection to the organization’s activities in the region, describing it as an arm of the Syrian regime with a humanitarian guise.

Activist Fayez al-Deghaim, a resident of Jarjnaz city in Idlib’s countryside, believes that SARC and its employees are directly affiliated to the regime, which interferes even with appointments of positions.

Head of SARC is appointed by a governmental decision. This is exactly what happened when Khaled Habbouti was appointed as head of the organization in December 2016 by a decision of PM Imad Khamis, after amending Article 20 of the Syrian constitution allowing the Prime Minister to choose one out of four candidates for the organization’s board of directors.

Al-Deghaim rejected the presence of SARC in his town and opposition held area, pointing out that it has been long a belief of his even before the organization was exposed in these recent developments.

According to al-Deghaim, SARC is not only affiliated with the regime, but rather helps its forces to forcibly displace people and provide first aid assistance to its members, while it takes neutral positions in cases concerning the region’s civilians.

The head of the Maarata school in Kalali camp in the northern countryside of Idlib, Sari Rahmoun, described SARC as “an organization that plays a repressive role in favor of the Syrian regime”,  referring to its selective activities in Kafriya and Al-Fu’ah towns, which were besieged by the Syrian opposition factions at a time when the organization was not providing clear services in the opposition-controlled areas.

On 10 March, the official Syrian News Agency (SANA) reported that the Syrian Minister of Foreign Affairs, Walid al-Muallem, discussed with President of the International Committee of the Red Cross (ICRC), Peter Maurer, mutual cooperation between both parties to ensure the provision of aid to the war-affected regions, in coordination with SARC. 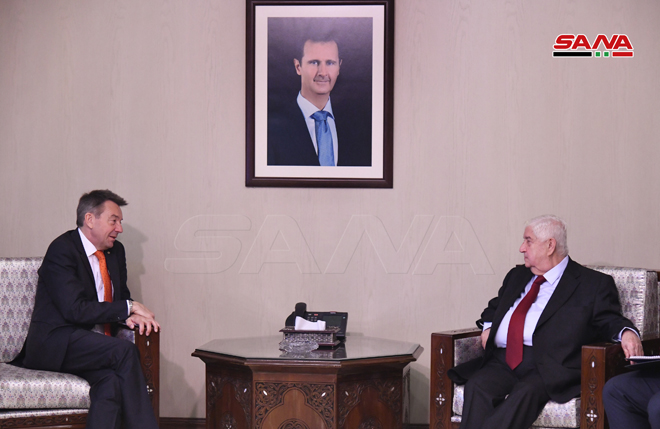 In a joint press conference between Habbouti and Maurer in Damascus, on 11 March, the latter affirmed that SARC is seeking to increase funding of resources and aid for all those affected, and encouraged countries to increase their fundings given the massive needs in the region.

Habbouti explained that the organization’s plan for 2020 includes increasing the number of beneficiaries, especially with the “liberation” of many areas and their return to the “embrace” of the Syrian state, so assistance can be provided without any interruption or breach.

These statements came at a time when the Russia-backed Syrian regime forces launched five military campaigns causing the displacement of about one million citizens in Idlib and its countryside, according to UN figures.

Habbouti told the pro-regime newspaper al-Watan that the average number of beneficiaries in Syria reaches five million people annually, noting that these aids reached more than four million citizens by the end of 2019.

According to Habbouti, the number of beneficiaries from food distributions and non-nutritional relief items reached six million people in 2019.

The number of volunteers in SARC reached 12,400 people, who take intensive training courses to deal with the various cases. According to Habbouti, 65 people have been killed since the start of the war in Syria, representing the largest world widely so far.

A meeting between the head of SARC, Khaled Habbouti, and the president of the International Committee of the Red Cross, Peter Maurer, in Damascus – 11 March (al-Watan)

What about services provided by SARC in Idlib?

According to one of SARC’s employees, who spoke to Enab Baladi on condition of anonymity, the services provided by SARC branches in Idlib and Arihah have decreased since 2015, as a result of the pressure exerted on the organization by different parties, as well as the damages that have affected its hospital and a number of vehicles due to the ongoing military operations.

As a result, the provided services have been limited to medical ones by first aid teams and primary health care services as well as social services, which include psychosocial support, support and empowerment of vulnerable groups through professional training sessions, computer leadership, and English language leaning in Idlib only, according to the employee.

In a statement to al-Watan newspaper, Khaled Habbouti, Head of SARC, said that with the entry of what he called the “Syrian crisis” its tenth year, volunteers have been subjected to pressure to stop and obstruct their work and force them to withdraw from certain areas northern Syria.

As regard to relief works, SARC in Idlib, with the support of several national societies affiliated with the International Movement of the Red Cross, the Red Crescent and the International Committee of the Red Cross (ICRC), started implementing a plan as a response to the recent displacement situation that exceeded one million displaced persons, due to the increasing severity of military actions and hostilities, according to the employee.

In September 2019, SARC opened an “emergency kitchen” providing 10.000 cooked meals on a daily basis, distributed in camps and displaced families within Idlib and its countryside in coordination with local community leaders.

It also distributed 5000 packages of non-nutritional items and equipped a number of shelters and water tanks for some of the IDP gatherings and contributed to the evacuation of a number of families from high-tension areas.

While the organization was coordinating to complete this response work according to the set-up plan and cover a portion of these needs, it was subjected to pressures which resulted into the suspension of collective kitchen and prevented it from distributing the second batch of non-nutritional packages. This led to annulment of the response work, according to the employee, who explained that all of materials were purchased by donors from the local market to be handed later to SARC in Idlib, and none of them entered through the contact lines, as it is promoted.

The employee stressed that SARC had never declared its ability to cover all areas with humanitarian crisis, but rather expressed its readiness to support responding agencies and organizations like any responding organization which covers certain needs.

The employee supported this argument by saying that the organization is coordinating with the Turkish Red Crescent, (Turkey is considered as a hostile party to the Syrian regime in Idlib), to distribute some humanitarian aids.

The Idlib Center seeks to sign a joint work agreement between SARC and Turkish Red Crescent, under the auspices of ICRC since they are members of the international movement of their associations.