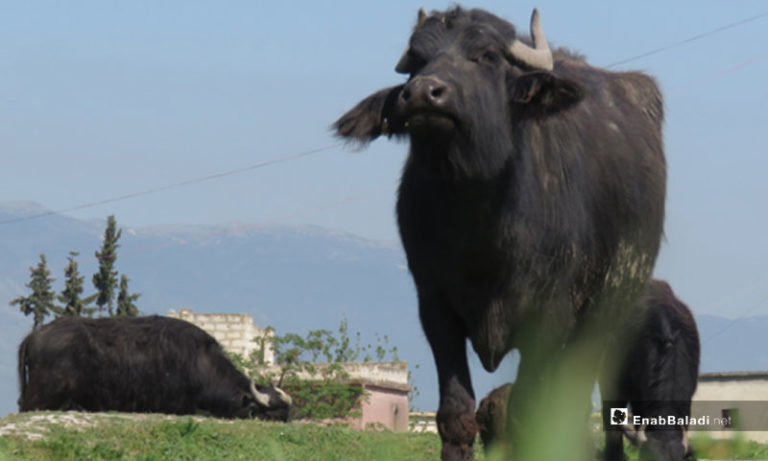 The water buffalo has become an endangered species in the Hama countryside due to the long war conditions that has led to the loss of hundreds of buffaloes.

Mohamed Anizan, head of the Guidance Authority in the town of Sharia, west of Hama, says that buffaloes are domesticated animals in al-Ghab Plain. Their breeding dates back to about 800 years ago and flourished when al-Ghab plain was a swamp, because buffaloes need adequate water quantities, moisture and temperate weather.

Fortune for the region

The buffalo is a domestic animal that looks like a cow in its form, but it differs in its character and behavior. Its milk and its meat that is preferred to cow products locally.

Years of ongoing battles in the area have led to a reduction in ​​the buffalo’s pasture areas, raising the cost of its breeding, in addition to the death of hundreds of these animals as a result of shelling and battles, as well as the displacement of most of the area’s population of the countrysides of Hama and Idlib with herds of buffaloes.

Anizan pointed out that the breeding of buffalo in al-Ghab Plain is a source of livelihood for breeders and many families that depend on this animal’s milk and meat.

Locals consider that the buffalo’s milk and meat as tastier than cows, despite the high price compared to cow’s milk. In addition, the buffalo breeding depends on turning agricultural crops to food unlike the rest of the livestock, such as cattle, sheep and goats, and relies on grazing in all seasons to secure the animal’s food, while in the winter season it needs concentrated feeds such as “thilaj” and “al-Drees” for feeding.

In addition, the buffalo’s strong body structure and resistance to diseases have made it an important livestock in Syria, especially in the countryside of Hama.

The war threatened its existence

“We did not expect to be displaced with the buffalo herds outside the area of Qalaat al-Madiq, especially from the villages and towns of Sharia, al-Tuwayni and al-Karim, as these towns used to be the ideal home for the buffalo,” said Salim al-Ibrahim, a buffalo breeder in the countryside of Hama, in an interview with Enab Baladi.

He added that “Due to the availability of pastures and water swamps, we were not worried about where we should bring food to the herds of buffaloes, which were reproducing there and living in optimal conditions.”

The breeder talked about the impact of the regime forces’ intensified shelling of the towns of Qalaat al-Madiq since February, which led to the death of many of buffaloes, despite the transfer of many others to the areas of displacement near the Turkish borders, which increased the rate of these animals’ death and the selling of some because of the absence of suitable conditions for their breeding, according to al-Ibrahim.

In addition, the factors of poverty and lack of services in the region push the population of the region to sell a number of buffaloes in order to buy medicines and feed the buffaloes, amid the absence of any sponsoring party to breed these animals and ensure their survival, says breeder al-Ibrahim.

He added: , “Today I have only about 40 buffaloes, and there is another herd of no more than 50 buffaloes. That is all the buffaloes that have left in al-Ziyarah Subdistrict, and I may be obliged to sell a number of them to butchers to be able to buy medicines and fodder, especially since the organizations working in northern Syria have not taken the situation of the buffalo into consideration and have not paid any attention to this animal.”

Before 2011, there were about 600 buffaloes in the villages of al-Karim, al-Tuwayni, and Sharia in the countryside of Hama. This number increased in 2018 to reach 75 buffaloes in these villages after the opposition took control over them, in addition to the presence of another 300 buffaloes in the area of ​​Jurin, which is currently controlled by the Syrian regime.

Buffalo breeders in Hama countryside had previously called on the interim government, the Free Hama Council, and local organizations and associations to preserve this livestock, but found no positive results, according to Mohamed Anizan, head of the Guidance Authority in the town of Sharia, west of Hama.

“We, as agronomists, suggest a prompt and direct intervention in helping breeders and providing concentrated feeds, because buffaloes need to be fed during periods of displacement due to lack of pasture areas in Idlib Governorate,” says Anizan.

On the possibility of the buffalo’s infection with diseases, Anizan explained that buffaloes have great resistance to environmental conditions and high immunity, and therefore it is now a priority to provide its breeders with fodder to prevent the selling of this animal.