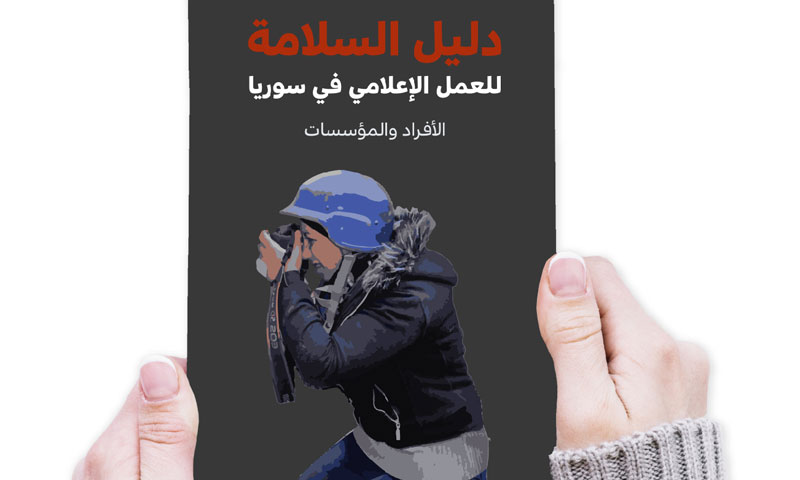 Syrian media outlets launched the “Safety Manual for Syrian Journalists,” authored by safety coordinators in a number of independent local media outlets, in a ceremony organized by the Syrian Network for Printed Media (SNP) on Friday evening, December 28, in the presence of a group of Syrian journalists and media personalities.

With the field it covers, the book is the first of its kind in Syria, directed to both individuals and foundations, inside and outside Syria.

It is the result of a number of workshops and training courses organized for the past tow years under the supervision of international and local trainers and experts, with the participation of SNP, Syrian Female Journalists Network, Ayn Almadina magazine, Enab Baladi newspaper, Rozana Radio, Zaiton magazine, Souriatna newspaper, All Syrians newspaper, Sada al-Sham and the support of the International Media Support Organization (IMS).

In the introduction, the authors say: “The safety of journalists is a basic building block of the foundation of a true Syrian journalism, which turns it into a priority cause for journalism organizations and foundations to address, one that must be allocated all the care it demands.”

Majd Aliyan, safety coordinator, in Enab Baladi newspaper, said that the safety manual addresses the effect of the happenings in conflict zones on Syrian journalists and the ensuing risks that threaten their lives, in addition to legal and other risks inside and outside Syria.

It gives workers in the field of media needed guidance as how to deal with possible incidents before, during and after they take place, he added.

The Syrian journalist Samer Mdalaleh, who has recently left Eastern Ghouta, said that the manual might be a trigger to get back to work in Syrian hot spots, pointing out that activists who functioned in Ghouta previously lacked measurements and basics needed to preserve their personal safety.

He stressed the importance of the manual for the safety of journalists inside Syria and called journalists to work under and abide by its regulations to reach the highest levels of safety.

In 2018, 11 journalists died in Syria according to a report issued by the “Reporters without Borders” organization.

On a list of 180 states, addressing freedom of journalism, Syria ranks 177, as reported by the organization.

Syrian journalists and activists have been facing violations since the beginning of the peaceful movement in Syria in 2011, for the Syrian Center for Media and Freedom of Expression documented the killing of 435 journalists and media personalities by the Syrian regime and its Russian ally since March 2011 to August 2018.