Northern Rural Homs “Out of Coverage” 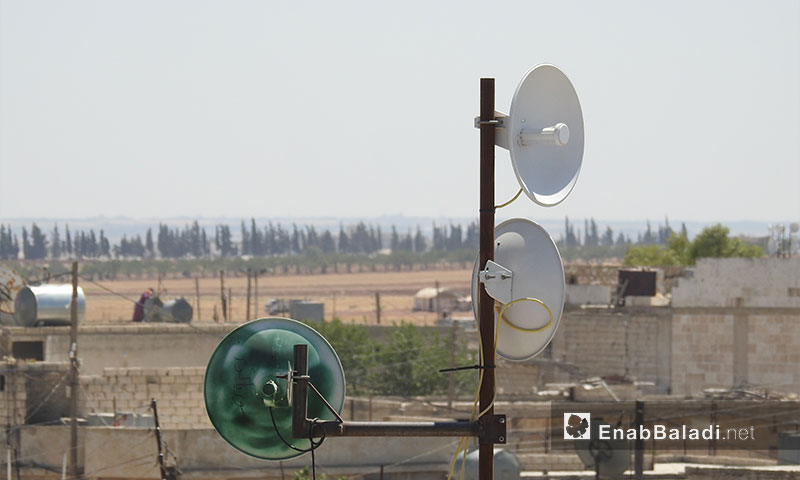 Months after the Assad’s forces have controlled the towns of rural Homs, the area started to lack internet service which alienated people from the external world because the security forces have removed the Turkish networks which covered the area in the last years.

Though the officer in control has promised the people that they can use the Turkish satellite Internet until it is replaced by the Syrian local networks, the security forces have suddenly confiscated the satellites, arrested their owners and fined them.

The removal of the Turkish satellites by the military security two weeks ago and the abstinence of the two local companies “MTN” and “Syriatel” from installing telecommunication towers in the area cast the people away from the world.

On May 16, the Assad’s forces announced total control over the northern countryside of Homs and the southern rural Hama, after the departure of the last portion of fighters from the area to Idlib governorate according the settlement deal imposed by Russia.

The northern rural Homs deal provided for enhancing stability and security in the area’s cities and towns.

Confiscation and No Solutions

During the battels in the past a few years, and specifically due to the Syrian air force shelling, the infrastructure in the area was destroyed including the telecommunication networks and towers in an attempt to alienate the areas from the external world. This triggered people to use Turkish satellite internet, which compensated for the local networks, offering them suitable prices and quality services.

Mohammad, an owner of an internet line in the area, told Enab Baladi that “when the Syrian regime controlled the area, we continued to offer the service to the people after getting the approval of the security forces. However, they tricked us, raided our shops and confiscated all devices, even the personal ones. They arrested us for three hours to release us after paying a fine that exceeded a 100 thousand Syrian pounds.”

The remarkable thing is that the security stations in the area were also using the Turkish satellite internet by installing receivers, to get the internet signals from the surrounding devices, which shows the area’s lack of the basic services, especially telecommunication services, according to Mohammad.

The young man Mohammad, informed of how the services are being run in the area, said that the Syrian telecommunication companies inability to install towers in a short period, forced the security forces to allow people use the Turkish networks in the past five months.

“Despite this, the military security patrols confiscated all the Turkish devices, the price of which is about eight thousand dollars,” Mohmmad added.

With the Syrian telecommunication companies offering only a few services, which are bad, the distribution of the telecommunication towers in the areas was a reason why a massive portion of people had no access to the network at all.

A telecommunication engineer in the area, who refused to mention his name for security reasons, told Enab Baladi that “the telecommunication companies have changed the towers’ distribution order according to favoritism, bribes and nepotism through signing contracts with figures that have powers and relations with the government as to install the towers within their establishments and properties.”

Favoritism and bribes are interfering in the affair as to get the value of the contracts signed with the properties’ owners, which might arrive at four million Syrian pounds per year. This was confirmed by the engineer, who pointed out to other advantages the contractors would get, such as free access to internet and others.

The Telecommunication Company in the northern countryside of Homs has signed a contract providing for the installation of its coverage towers in the area a week ago, but the engineers did not show regard for the best locations to install them or the required standards to be met for the process.

The absence of the Turkish satellite internet, in comparison with the Syrian networks, affected the people in terms of quality and prices, for the Turkish internet 1 gigabit package costs 200 hundred Syrian pounds, while the same package of Syrian internet would cost about 2000 Syrian pounds, in addition to the discrepancy in terms of quality and censorship imposed by the Syrian security forces on the service.

Since the beginning of the demonstrations in 2011, the Syrian regime controlled all types of communication in the cities, neighborhoods, towns and villages which witnessed anti-regime movements.

The regime also followed a policy based on separating the people from the external world, which gave its forces the ability to move easily and a wider space to combat the demonstrators. However, when the areas went out of its control, the people resorted to alternative means, including satellite internet and other networks from Turkey, Iraq and Jordan.