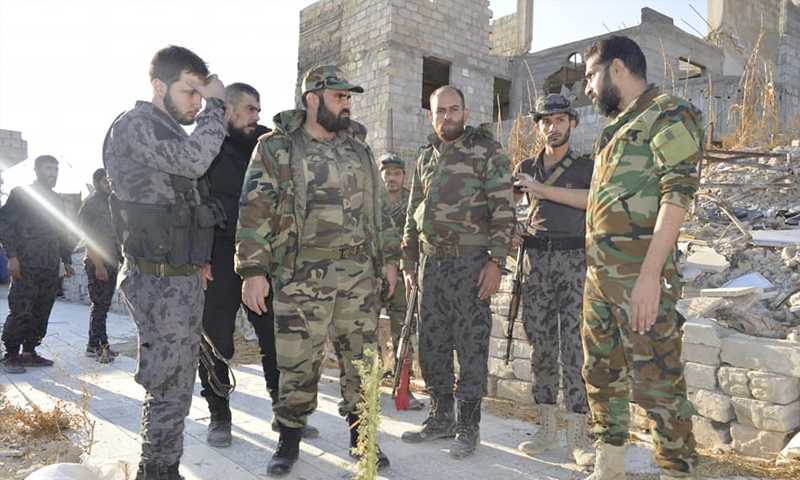 Members of al-Mazrou group, under the department 215, at the fronts of al-Qadam neighborhood – February 2018 (Facebook)

The Syrian regime takes action to finalize the file in the areas out of its control in the southern side of the capital Damascus, represented by the points of the opposition’s factions’ control, neighborhoods and other areas under the control of the “Islamic State” (ISIS).

In the past a few days, ISIS have progressed in a space of more than 90% of al-Qadam neighborhood, following battles with the Assad’s forces, which included the parts that used to be held by the opposition factions, which left the area to Northern Syria according to an agreement in last March.

The Syrian regime’s affiliate media outlets, on (Friday) April 6, reported Assad’s forces’ reinforcement and military build up in the surrounding of the southern neighborhoods of the capital, Yarmouk Camp and its vicinity in particular, which means the points controlled by ISIS.

“Al-Watan”, a regime affiliate newspaper, stressed that annihilating ISIS in the area “would not be achieved according to agreements, but with military resolve.”

Under ISIS’ file, the latter exchanged the bodies of Assad’s forces members in return for women detainees in the regime’s detention centers. Enab Baladi’s sources estimated the number of the exchanged bodies with more than 100, pointing out that the operation was implemented in stages, under the auspice of the “Syrian Red Crescent”, last March.

“Sawt al-Asima” Network, which broadcasts Damascus and its rural areas news, quoted sources saying that Russians have threatened ISIS about the necessity of their departure through the permeant mediator Ihab al-Salti, without any developments in the file.

ISIS controls about 70% of Yarmouk Camp’s area in the southern area of the capital, concentrating its presence in al-Hajar al-Aswad (its major stronghold), al-Asali area and part of the Damascene neighborhood of al-Tadamon.

Negotiations between Russia and the Opposition

To the 10th of April, the area witnessed no changes or developments, for the negotiations between the opposition’s military factions’ representatives and Russia, as to finalize the file, are yet going on, while the regime mobilizes forces against ISIS, according to what informed sources from southern Damascus have told Enab Baladi.

Media outlets, close to the Siyan regime, talked about movements to finalize the file in the towns of Yalda, Babbila and Beit Sahem, controlled by the opposition, in addition to the areas controlled by ISIS as a separate file.

The people in the opposition-held neighborhoods refused to exit the area, in January 2017, which they expressed through repetitive demonstrations back then.

Pro-regime websites quoted sources saying that “the affairs are strongly heading to conducting reconciliations in the towns, pointing out that “the majority of the armed men started to give up their stubbornness after the Syrian army has controlled Eastern Ghouta.”

Enab Baladi’s sources said that it is likely to have an evacuation agreement in the up coming days and linked the matter to the finalization of Duma’s file in Ghouta,  which remained after the displacement of thousands of people from the middle sector and Harasta to Northern Syria.

The sources explained what happened in the past a few days, speaking of the two meetings that joined the representatives of some factions and Russian generals, through which the departure to the North has been suggested or a “reconciliation”, while Russians have threatened to conduct military operations.

The sources pointed out that the factions’ representatives have requested a period to consult with the areas’ principle figures, talking about the regime’s officers who informed the preventatives of a delay about making a decision concerning the area to the phase “after ISIS’ termination”.

The people in the towns controlled by the factions are living under a truce with Assad’s forces, since years, and “Hay’at Tahrir al-Sham” has lost half its control due to its retreat for the advantage of ISIS, last March, while its fighters are still spread in the Rijh Square and the residential blocks surrounding it, reaching the ‘Ain Ghazal street.