Assad’s Forces Seek to Complete Securing the Belt around Damascus 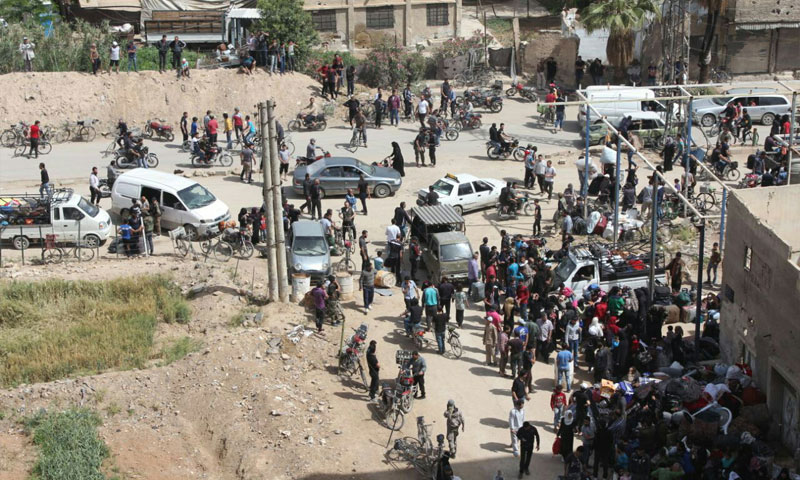 Assad’s forces seek to complete securing the Syrian capital, Damascus, from any enclaves held either by the Syrian opposition or by the “Islamic State” ISIS.

Assad’s forces are working on three separate files, attempting to reach an understanding to transport the fighters and families in the southern neighborhoods of Damascus to northern Syria, to implement the “five cities agreement” and to continue the military operations against the “Islamic State”.

At the expense of the “Islamic State,” Assad’s forces and ally militias managed to advance in southern Damascus, under the military campaign, through which they aim to control the area entirely.

They have seized the southern western part of al-Hajar al-Aswad neighborhood, after they achieved a progress at a number of axes in the northern part of the neighborhood.

This expansion followed the operation that separated al-Hajar al-Aswad from the Yarmouk camp, which fragmented the efforts of the “Islamic State” in two enclaves, the area of each is 100 square kilometers.

The “Islamic State” did not comment on the retreat; however, it announced the death of 180 members of the forces that stormed the area, according to a census published by its affiliate e-newspaper “al-Nabaa” on Thursday May 3.

Bargains with the “Islamic State”

In sync with the battles between the Islamic State and Assad’s forces, the two parties have arrived at an agreement that provides for exchanging ISIS’ female detainees with the bodies of Assad’s forces, who died during the military campaign.

Media sources in the Yarmouk Camp told Enab Baladi that Assad’s forces have proposed to negotiate with ISIS concerning detainees, the bodies of its members and 11 detainees who ISIS has executed.

According to the sources, the “Islamic State” has presented lists with hundreds of names of male and female detainees to be released in return for surrendering the bodies of Assad’s forces dead members.

The sources added that the regime has approved the bargain and that ISIS succeeded in releasing a number of detainees, almost a 100, among whom are a family from Yabroud, eastern Qalamun, while the regime alleged that the rest of the demanded names are either missing or dead.

The Yarmouk Camp-Kafriya and al-Fu’ah agreement (known as the five cities) entered the phase of implementation early in May. “Ebaa” Agency, under “Hay’at Tahrir al-Sham” explained that the agreement was directly conducted with the Iranian side.

Twenty-two buses entered the two towns of Kafriya and al-Fu’ah from the city of Aleppo to transport 1500 fighters and civilians from the two towns to the makeshift housing center “Jibreen,” according to what the Official News Agency “SANA” has reported, but the families of the two towns refused to exist partially.

The “five cities” agreement was adopted following meetings between the representatives of “Tahrir al-Sham” and “Harakat Ahrar al-Sham al-Islamiyya” with Iranian representatives in the Qatari capital Doha.

It also provided for the exit of the people from the two towns of Kafriya and al-Fu’ah in return for evacuating the fighters from al-Zabadani, Madaya and Bloudan, who have all headed to northern Syria last year.

However, evacuating the people from the two towns of Kafriya and al-Fu’ah was not resumed back then, due to the obstacles that hindered the negotiations between the two sides for being related to the Yarmouk Camp file in southern Damascus.