Theatre by Children in Rural Idlib 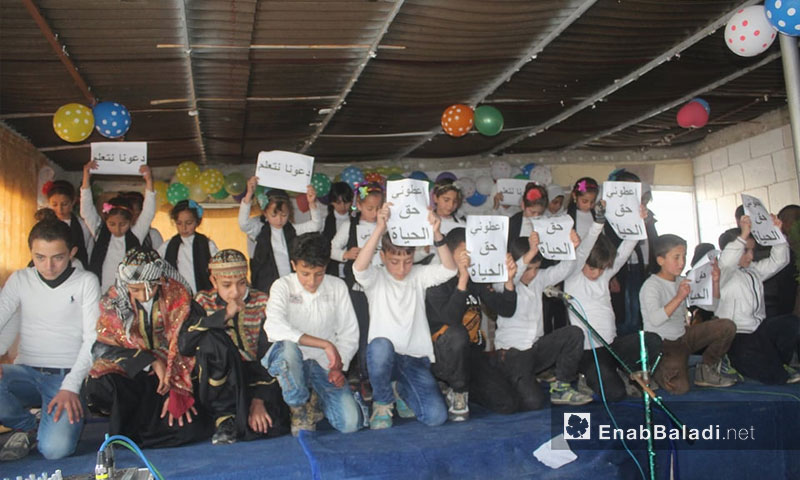 “The people in Ghouta are crying just like us; they are also hungry,” Nour, a 10-year-old girl, said and tears fill her eyes before she could finish her words. She described her role in a play that represented the siege over eastern Ghouta, which she and her friends presented in rural Idlib on Thursday, 12 December.

Celebrating the graduation of first response trainees who finished the first turn of a course organized by “al-Amal’ (Hope) Creative Center, which has been recently established, a group of students, who study in an institution supported by the Center, performed plays about the occupied Jerusalem, eastern Ghouta’s siege and the dire reality of education which Syrian children are suffering.

The role of the elderly woman in Ghouta, which Nour embodied, was “difficult,” as she told Enab Baladi, echoing the following expressions: “Jerusalem will remain Arab and the siege on the people of Ghouta will soon end”.

“Abu Antar” is the title given to the child Salah, a student in “al-Amal” Center, who had a role in the part of the play called “war and peace.” He told Enab Baladi that he participated in the performance to send the world a message, considering that “no one feels for us, or for the things we are living.”

Abdul Hadi al-Saleh, the director of the psychological support office, supervised the selection of the plays and the children suitable for playing the roles. He said that he was surprised by their performance, “which exceeded the rehearsals that preceded the play and showed creativity.”

In his interview with Enab Baladi, al-Saleh did not overlook any of the roles played by the children and said that “each of them played a role that was beyond description.”

“Despite misery, we are seeking to make hope out of pain, in an attempt to assure that our country still holds goodness, even though orphans are being neglected and the Ghouta’s siege persists,” he said.

Abdel Majeed el-Besh, the Center’s managing director, said that he contributed to the writing of dialogues and scripts, along with the teachers and the psychological support team. He also pointed out that the performances coincided with the graduation of the first group of trainees enrolled in the first response aid course, which had the title: “The Medic is at Your Home.”

Mohamed Halaq, the nursing instructor at the Center, explained to Enab Baladi that,”the course targeted 40 male and female trainees, before the graduation of most of the students, who received lessons according to an approved training program.”

“Al-Amal” Center was established by a group of volunteers who worked for four months in Idlib governorate. They organized an ambulatory care course and enhancement courses for the ninth grade and high school students. The Center also contains a kindergarten and a department for people with disabilities and people with war-related disabilities, according to the Center’s management.