Political empowerment not a priority for Syrian refugee women 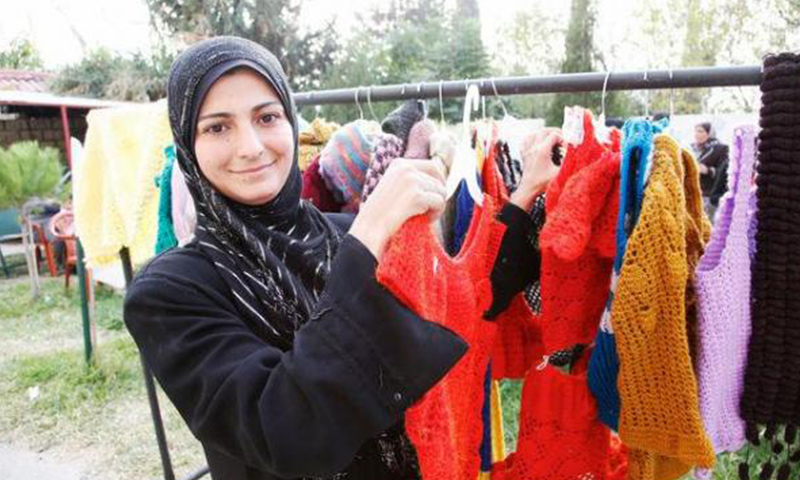 A woman from Homs, Syria, now a refugee in Lebanon, shows off knitted woolen clothes that she's learned how to make with support from the International Rescue Committee and UK aid. Photo by Russell Watkins/DFID

Amira Hasan jokes that she teaches women “how to destroy their marriages,” repeating a common comment she receives when she tells people she works on empowering women.

Hasan, 32, is a facilitator for international nonprofits in Lebanon that work with Syrian refugees to encourage political empowerment and informed decision-making.

She now lives in Baalbek, Lebanon, though her journey here has not been easy. When the mother of five arrived from Syria, she had to find a job as soon as possible to provide for her kids. She also had to protect herself from harassment and exploitation in her new environment.

“I was convinced that, as a refugee, I had some sort of rights in the country that welcomed me. For this reason, I searched for a job with local organizations that support refugee women,” she says. “Despite encountering all types of harassment during the first year, I did not give up. My goal was to find a job in one of these organizations. I wanted to help prevent other refugee women from going through what I had been through. I wanted them to receive help and support with dignity.”

Hasan works as an activity coordinator for more than five international organizations located in Lebanon’s Bekaa region. The programs offered by these organizations range from social and psychological support for young adults to empowering women in times of stress.

Hasan has participated in a number of community leadership courses for women, some of which were offered by ActionAid, an international organization that focuses on empowering people in conflict areas. The skills she gained through the training have helped her rebuild her confidence and dispel the common notion that refugees have no hope once they leave their home countries. Hasan hopes that one day she will be able to return to Syria and help people there.

“My real life began five years ago,” she says. “Thanks to the skills I learned here in Lebanon, I am now able to positively impact my community.” ActionAid in Lebanon offers many programs that educate women on their rights and work to end illiteracy. The organization also contributes to forming local councils with female leaders.

Political empowerment for women means being able to participate in making economic, social and political decisions to achieve sustainable development and equality in society.

Many international organizations have moved beyond the cooking, handicraft and cosmetology workshops that reinforce stereotypes about traditional female roles in society. Organizations now want to prepare women to be leaders in their communities and help them integrate into the labor market through economic empowerment and community leadership programs.

Sabah Hallaq, a member of the Syrian Women’s Association, says the shift in the work of international organizations toward political and economic empowerment of women is due to pressure from donors. The feasibility of these projects have yet to be measured.

“Political empowerment is closely linked to economic and social empowerment, starting from the decision-making mechanism at home, and continuing to the right to run for public office. Information on how to exercise this right was absent for decades in Syria,” Hallaq says. “The mistake that international organizations made – but not the local organizations like the Syrian Women’s Association – was the removal of men from these courses, which raised the rate of domestic violence against refugee women in Lebanon.”

Working in public domain not an option for refugee women

For Syrian women still living in Syria, nonprofits offer a range of development programs, including transitional justice courses and courses that aim to raise women’s participation in local councils. Yet in asylum countries, the programs offered to Syrian refugee women often focus on protection against domestic and gender-based violence.

“The difference might be due to the conditions under which women live in the host communities, and due to the fact that their chances to work in the public sphere are very limited,” says Dima Karadsheh, the gender program director at CARE, an international relief organization.

“This is not a gap,” Karadsheh explains, “but reflects different legitimate approaches that enrich the field of female empowerment and help women engage in their society on several levels, whether economic, social or political.”

Hallaq says that political empowerment programs for refugee women are not necessarily useful in asylum countries, since many of those countries lack laws that guarantee women their rights. “When political participation programs were first launched in the Bekaa area, Lebanese security forces were not comfortable with the idea,” she says. “But when we explained what the goals of the training were, we did not encounter any problems with them.”

According to Lama Qannout, a writer and political activist, some of the empowerment projects in Lebanon lack strategic planning. “The communication between the participants and the organizing entities is limited to the workshops, which only last for two to three days,” Qannout says. “There is no follow-up. No one works with the participants after the workshops end to help them apply what they learned within the country of asylum. Additionally, these programs do not allocate specific funds to provide legal assistance for the participants within the host country.”

Qannout sees female political empowerment differently: “Women are not encouraged and supported to organize themselves [in civil society or in political parties]. Instead of encouraging them to express their own demands, develop their skills or trying to connect them with the U.N. mission and donor conferences, some organizations use their work with women refugees to speak on their behalf in international forums.”

Qannout’s recently published book, Political Participation of Syrian Women Between the Center and the Margin, highlights the hegemony of the political elite and how these elites exclude women from decision-making. The book aims to unveil the discriminatory practices against women that discourage and prevent their political participation.

Since her arrival in Lebanon, Ghabbash has participated in more than 20 workshops on gender-based violence, women’s empowerment and transitional justice. “At the beginning, I was suspicious of these new ideas. With my religious and cultural background, they sounded so foreign to me,” she says. “But now that I work in this field, I find that having the same background as other refugees … helps me better communicate these ideas with them.”

Ghabbash, who studied English literature at the University of Damascus, currently works as an administrator and computer instructor at Women Now for Development in Bekaa, Lebanon. Ghabbash believes that sewing and beauty courses can also be useful in indirectly addressing women’s rights, leadership and political empowerment.

“My primary goal is to open new doors for women to help end their illiteracy in the areas of political and economic empowerment, and to set multiple options for them to define their future goals,” she says.

Economic empowerment workshops are the most useful for refugee women, according to Ghabbash, because attendees are able to use their certificates to help them find work. Plus, they receive a transportation allowance that can provide an income of up to $4 a day. But as soon as these workshops end, the women receive no further support. If they are now able to make a product or a handicraft, for example, they do not receive help marketing and selling their products.

Karadsheh of CARE believes this lack of support at the end of training programs is a problem. “In most programs, support ends with the end of the program itself,” she says, either due to a shortage of funding or the relocation of participants. Karadsheh explains that despite these programs’ goals to empower women, most of them fail to provide sustainable support to help women actively engage in the public domain.

Ghabbash says that most trainings focus on “explaining the basic concepts of women’s rights” as seen in international law and civil society. “The goal is to prepare women to engage in the process of decision-making, and to refine their leadership skills so they can contribute to changing society and to the peacemaking process at the local and international levels,” she says.

Syrian refugees in Lebanon and Jordan often face difficulties in applying their newly obtained political and decision-making skills due to these countries’ positions on the conflict in Syria.

Rana, 33, who asked to remain anonymous for security reasons, believes that her work as a seamstress does not necessarily reinforce stereotypes of the traditional role of women. She believes sewing allows women to develop their creativity. “I studied economics in college,” she says. “When I arrived in Jordan in 2012, I worked at a clothing factory. Although it is not related to my education, I enjoy my work, and it provides me with a reasonable income.”

Rana has not participated in political empowerment or social leadership workshops, but she believes Syrian refugee women are qualified to be leaders in rebuilding the country. During the years they have spent outside of Syria, Rana explains, many women have proven they can be independent, succeed in many fields and successfully take on new responsibilities.

One workshop cannot make a significant difference in the lives of women, especially when the organizations providing the workshops offer no ongoing support. Syrian researcher Alya Ahmad believes the two key factors of women’s empowerment are the women themselves and the law.

“There have been profound and radical changes in the behavior of Syrian women in recent years, whether as refugees, displaced people or even residents of areas controlled by the regime, or under the control of armed Islamist factions or the Kurdish factions,” she says. “In all these areas, women have started their own revolution against many traditional values and social patterns that used to control and limit their freedom. There are many ways to challenge authority, and each woman fights from her position and in her own way.”

For women to gain their full rights, Ahmad says, they need to organize themselves into associations and demand the establishment of their rights within the law. The legal forms of discrimination against women must be abolished to ensure true equality in society and in the eyes of the state.