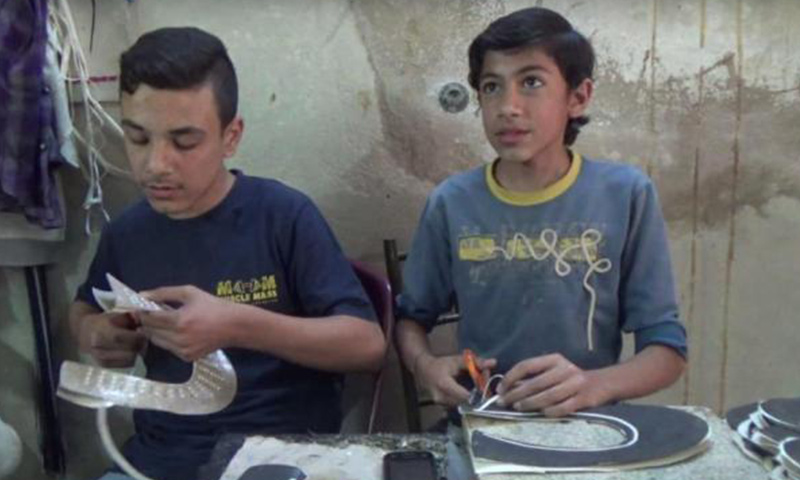 Ali sits in a grim shoe-manufacturing workshop in the Syrian capital Damascus, where he works up to 10 hours a day, six days a week, for no more than $1 per shift. Instead of going to school, the 12-year-old boy, who fled the besieged southern suburbs of the capital in 2014, spends hours mending soles, cutting up leather and stitching shoes.

Tucked away behind a long table in the small shop, Ali says he does not feel odd working at such a young age.

“There are many other kids who work here,” he says, referring to four other youngsters, all below the age of 15, who also assist the Damascene cobbler.

Though Syrian labor laws prohibit the employment of children below the age of 15, the reality of war has made child labor business as usual in the conflict-ridden country.

The sight of young vendors stooping over vented plastic crates, or standing behind weathered vegetable carts, has become common in Damascus, where thousands of children as young as 7 peddle all kinds of goods on the streets of the fraught city.

The economic strain of the six-year civil war has also encouraged less visible forms of child labor, as an increasing number of youngsters take up work in dim factory buildings, dusty workshops and in the dingy backrooms of Damascene cafes.

Although specific figures on the number of children in the Syrian labor market do not exist, a UNICEF report released in March estimates that around 1.7 million youngsters are out of schools. Thousands of them are believed to have been forced to work, in a widening crisis that the U.N. says is only getting worse.

Ali’s story provides a glimpse into why this is happening.

At the age of 9, he was forced to flee the rebel-held Yalda suburb south of Damascus, which has been under total or partial siege since 2013, along with his parents and two younger siblings.

His father, who used to work as a blacksmith before leaving Yalda, had a difficult time finding a job in Damascus and was forced to settle for odd jobs that earn him little pay — working at times as a construction worker or even a delivery man.

For Ali, moving to the more expensive capital meant that he had to abandon hopes of returning to school.

“I could not go to school because I needed to support my family,” he says, while folding a sturdy shiny fabric with his hands.

Though he is often overwhelmed and “exhausted” by the long hours of manual labor, Ali says he prefers being employed in a workshop than peddling on the streets where he might get harassed. He even contemplates working as a shoemaker for the rest of his life, if necessary.

“If I can go back to school I would, but if I can not, I might keep doing what I’m doing now — making shoes.”

Sitting on a separate table beside Ali, the cobbler who manages the workshop does not acknowledge that the children he employs are too young for manual labor. Instead, he says he believes he is doing them a favor by “keeping them away from trouble” and teaching them “a new profession.”

“I do not see what the big problem is?” he asks rhetorically, explaining that all of the children he has employed had already left school and would have ended up loitering on the streets had it not been for the work given to them.

Aid agencies and experts, however, have warned of the steep price that children have to pay as a result of this widening crisis.

A March report by Save the Children says that the exploitation of children in Syrian labor markets has contributed to “toxic” levels of stress, raising their risk of suffering from addiction or long-lasting mental disorders.

A Syrian cognitive psychologist and an instructor in the Faculty of Education at the Damascus University told Syria Deeply that working children also tend to suffer from severe emotional deprivation and social seclusion.

“The children enter a state of conflict since they are neither able to actually join the adult world or fulfill their wishes as children,” said the mental health professional, who requested to be identified by his initials, G.A.

A solution has yet to be found for the growing problem that also impacts Syrian children who have fled the country.

Neighboring Turkey, Jordan and Lebanon have alarmingly high rates of child labor among their refugee populations.

According to Human Rights Watch, there are roughly 1.5 million school-age Syrian refugee children living in Turkey, Jordan and Lebanon, but about half of them do not have access to formal education. This figure is compounded by the number of children who had to leave school to help support their families.

In a 2016 survey of around 125 Syrian households in Istanbul, Turkish charity Support to Life found that 1 in 4 households with children had at least one child who could not attend school because they needed to financially assist their parents.

In Lebanon, a 2016 report by anti-slavery organization Freedom Fund cited a Lebanese NGO as saying that between 60 and 70 percent of Syrian refugee children are employed.

Meanwhile, the mass influx of Syrian refugees has helped double the rate of child labor in Jordan, where roughly 70,000 children, many of whom are Syrian refugees, are active in the labor market, according to a 2016 ILO report.