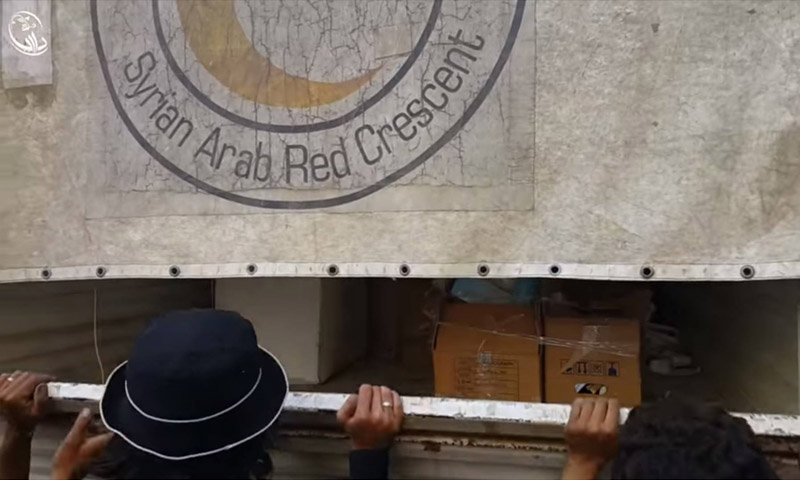 People of Darya, opening the aid vehicle. Photo: from a video posted by the “Local Council of Daraya City”.

Bernard Kouchner, the former French foreign minister, when was a doctor with MSF-Médecins Sans Frontières, once said he founded a committee against genocide in Biafra during the Nigerian civil war, because he “did not want to repeat the mistake of the ICRC, in WWII of not condemning the Nazi extermination camps”.

ICRC seems to be missing the lessons from its own past, which the Committee itself confessed it.

In his “Dialogue with the Past” article, François Bugnion, the ICRC’s Director for International Law and Cooperation within the Movement, reflected on ICRC failure to react vigorously to the persecution of Jews by the Third Reich during the WWII. Particularly, in the Nazi death camps of Theresienstadt, Mauthausen, Bergen-Belsen, Ravensbrück, Buchenwald, Auschwitz…

Has Daraya city turned into another death camp ignored by ICRC? Daraya had around 150 thousand inhabitants, before the Syrian regime started its extermination in 2011. Assad forces killed more than 2210 including 155 children, and 105, and detained 4543 including 241 children and 71 women. Today, only around 10 thousand are left, while languishing under siege in the devastated city, 8 km way from Damascus, the Syrian capital, and the fancy offices of UN and ICRC and other humanitarian organizations.

The besieged people of Daraya, like other areas besieged by Assad forces, had immeasurable suffering. Their tragic route started with indiscriminate arrests, torture and killing in detention. Deported, rained with barrel bombs, and air-shelled with their basic infrastructures targeted, including markets, medical and educational facilities and their staff. Subjected to an extermination siege since 2012, and “kneel or starve” strategy which is leading to social exclusion, despoilment, starving, humiliation, and finally the torment of international community’s neglect, and resounding failure of humanitarian agencies.

Bugnion asked in his article several questions on the failure of ICRC in towards Nazi concentration camps: “what did the ICRC know of the genocide? What action did it take? What did it attempt? What could and should it have done to try to stop the genocide? How has it faced up to its past?” Exactly the same questions asked today, but on Daraya this time.

On June 1st, another act in the farce plotted by Assad regime, using UN agencies and ICRC and in besieged city of Daraya, took place. After the humanitarian agencies’ resounding failure On May 12, when Assad forces granted access, then refused entry of the humanitarian aid convoy to Daraya, with which ICRC promised Darya’s people, and shelled the people waiting for the promised aid convoy.

A meeting of the International Syria Support Group) on April 17th in Vienna, said it would start airdrops in June 1st if Assad’s government kept blocking aid and preventing land convoys from reaching besieged areas.

Given the fact, that the first of June is the deadline for Bashar al-Assad’s government to allow land aid convoys reach besieged areas. And that the UN and ICRC convoy entered Daraya at the same day with the claimed humanitarian aid. It is obvious that the timing of the entry is planned at this day. But what was allowed into the besieged city, and why?

ICRC Syria tweeted: “#BREAKING: First humanitarian aid to reach people of #Daraya. We’ve just entered the city with @UN & @SYRedCrescent.” With no further more important detail that no food or real needed medicine was allowed in, that would break Assad’s “kneel or starve” strategy.

The news tweeted by ICRC Syria has two stories: breaking the siege of Daraya as the first humanitarian aid entered, and that ICRC entered the besieged city. Such news is misleading when it does not include that the aid didn’t include food, and that most of the vehicles where almost empty.

Footage showing several big covered vehicles, and a number of UN, ICRC and SARC cars entering the devastated city, was circulated in media. But the fact that the aid was little and unnecessary compared to the real needs of the people of Daraya.

The big covered vehicles were needed in the making of the propaganda film. Thus, the news is perceived as a cover for Assad regime strategy of “kneel or starve” starvation and blockade a method of warfare and war crime.

Assad regime planned the entry of the humanitarian agencies convoy at this very day, to tell the world that he stopped blocking the aid, and to blur the expected reaction to the end of deadline given, as a part of Assad propaganda scheme that ICRC and UN were used to fulfill.

Are UN agencies and ICRC so much desperate to prove they still own the meaning of their initials, or they want to be mentioned in history they entered the besieged city? History will maintain more if their mistakes, when they caused the death and injury of civilians including children, and being a part of Assad regime plot against humanity, and that Assad turned their initials to other sets of words, like UNFPA to “United Nations Food Propaganda Agency”, and ICRC to “The International Cover of the Red Crimes” in Syria. IOM, WHO and UNICEF have not missed the chance to register their names in the list of items sent to the starving people. 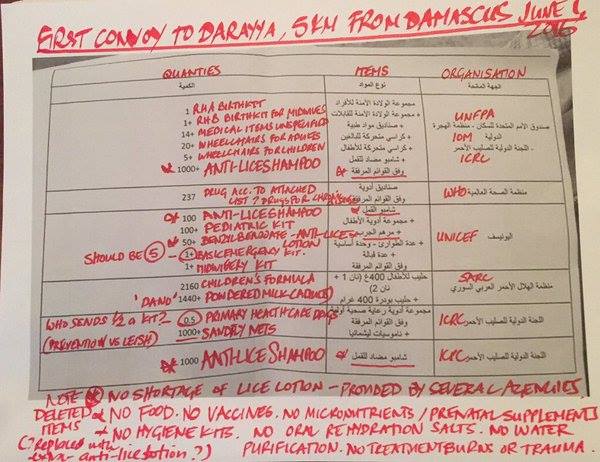 A photo of the list of items provided to Daraya, posted by Charles Lister.

SARC, the Syrian Red Crescent was in the lead of those who broke Daraya siege. Its red crescent logo that covered their cars reminds me of my own experience with it. In September 2011, I was on my way back to Damascus city center in a bus, when I glanced a SARC minibus, filled with soldiers and entering Mezza military airport, the place that I was detained and tortured in, only few months later.   I remember telling my friends to spread the news of this and beware of SARC vehicles, they could be intelligence undercover. “Partners in Blood”, an investigative documentary produced by London based TV channel, revealed SARC doctors covering crimes of killing under torture, committed by the Syrian regime, the same organization that led the international convoy into Dararya.

Bernard Kouchner once advised a humanitarian agency to struggle against becoming just the “bureaucrats of misery and technocrats of charity”. The first of June 2016, witnessed of UN and ICRC becoming even worse, a propaganda tool and cover for Assad regime.