The UN and ICRC’s Deadly Mistakes 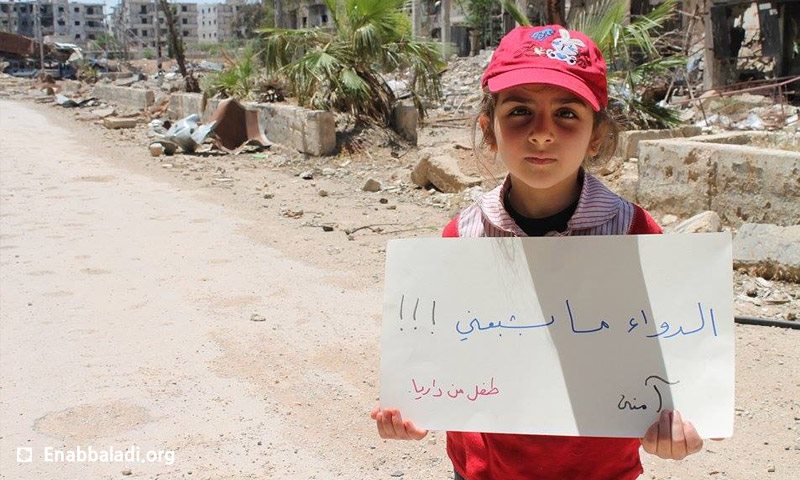 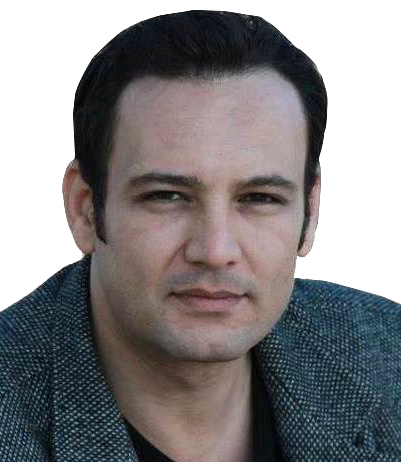 In his book, “Today We Drop Bombs, Tomorrow We Build Bridges” Peter Gill, a British journalist conveys a very senior UN official’s justification why the UN does not support Syrians out of the areas that are controlled by Assad forces: “we cannot help ]people[ in “liberated” areas because we have staff in Damascus. So if we help over here, then our staff will face real difficulties”, the UN official said, explaining why the UN does not help those who are suffering, due to the fear over its very well-paid, highly secured employees in Damascus, from retaliation by Assad’s “legitimate” government.

This UN approach as a result is serving Assad’s declared strategy of starvation and blockade as methods of warfare. This war crime has been publicly stated by the regime itself, written in large letters on his military checkpoints walls confessing the war crime they are committing, and referred to by several means and concerned body, including the UN reports, and international human rights NGOs. Nevertheless, Assad is still not directly named as responsible for war crimes, and protected by statements and wordings that include: “indiscriminate”, (instead of targeted or deliberate), “difficult to reach”, (instead of besieged areas) … “responsible parties” (when it is one party).

On May 12, Assad forces refused entry of the first humanitarian aid convoy to Daraya since 2012, despite a “prior clearance from all sides,” was obtained, according to the International Committee of the Red Cross (ICRC), which organized the convoy along with the UN.

A day before, ICRC informed Daraya field hospital of their intention to provide pharmaceutical aid the next day, according to the Daraya Local Council. The ICRC explained that the aid will include medications, vaccines and baby milk, and will not include any food supplies.

The news was circulated in Dararya, and people went the next day out waiting for the expected aid convoy, and to express their disappointment towards the aid that didn’t include food. 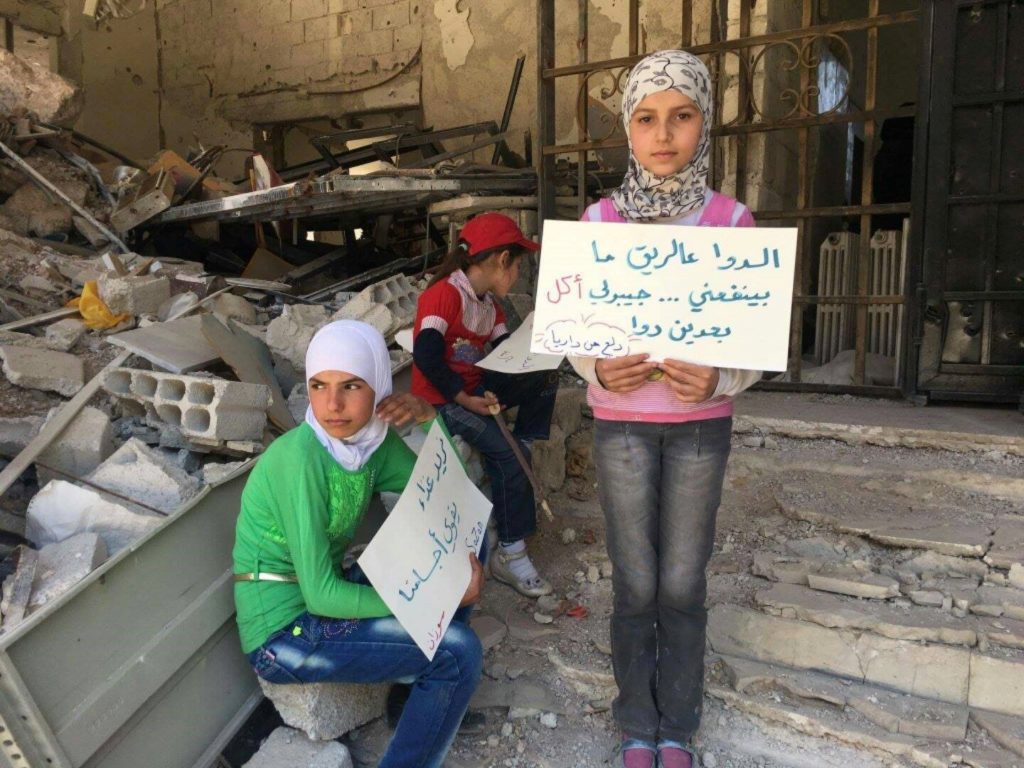 “Medication to empty stomach does not do me good… bring me food, so I can have medication”. Children waiting for the promised aid convoy. Image source: Local Council of Daraya City.

The aid convoy arrived outside Daraya, when the Assad forces officers at the checkpoint insisted to exclude both baby milk and medications from the aid, and to allow only the vaccines. The convoy team insisted that the aid should be delivered entirely. The negotiations between both sides held the convoy still for several hours in vain until the whole mission was cancelled and the convoy headed back to Damascus at about 6:15 pm without any aid delivered to the beseiged city. After the Syrian regime’s forces prevented ICRC and SARC’s medical aid convoy from entering the city of Daraya. they shelled the areas where people gathered waiting for the expected aid convoy. A father and a son were killed, and five were injured.

Assad forces has been blockading Darya since November 2012. About 8 thousand people survived so far, and are still detained in a real cell, as Assad stretched his detain-till-death network in Syria, to cover whole towns and cities.

In response to Assad’s forces refusal of the entry of the convoy, ICRC tweeted: “Sadly our aid convoy with @UN and @SYRedCrescent was refused entry to #Daraya, despite being given prior clearance from all sides”.

ICRC didn’t say a word about the tragedy that followed their failure to deliver their promised aid, in which civilians waiting for it were shelled by Assad forces, killing and injuring the starving innocents.

On May 8th, celebrating its World Red Cross and Red Crescent Day, ICRC published an article in its website, that had a promotional title: “Syria: Red Crescent and Red Cross is everywhere and for everyone”, though it is appealing to international donors for more generosity, the title itself is surprising and totally baseless. And proven not real by the same person who alleged it. Marianne Gasser, Head of the ICRC in Syria, who said in that article that “In Syria, being everywhere for everyone matters and saves lives”, after only four days, she stated the contrary: “There must be minimum conditions for independent humanitarian action in Syria… We urge the responsible parties to grant us this access immediately”. The “responsible parties” here is Assad regime who refused to allow medicine, but only Vaccines. It is not the task of ICRC to decide the parties who commits violations, but hiding the facts is not an acceptable approach.

Amnesty International responded quickly, to the Assad forces shelling for civilians waiting for aid, and said in a statement: “what appears to have been indiscriminate shelling, killing and injuring civilians,” said Neil Sammonds, Amnesty International’s Researcher on Syria. What appeared to AI as an “indiscriminate shelling” was discriminate killing and injuring, based on the facts that surrounded the tragedy. The favorite tool of the Syrian government, in its war against its opponents, is targeting the civilian incubator of its opponents, to force them back into the barn they were stuck in for decades. People waiting for some life-saving aid, was an “amazing” chance for the Syrian regime, the UN and ICRC are definitely responsible for. The UN cannot protect civilians or stop war crimes, we are done with that, but how come they don’t warn civilians not to gather waiting for its convoy! is it because the UN has faith in Assad’s systematic good conduct! the UN legitimate president of Syria!

When there is a killing machine lurking, ICRC information that brought people to a sight to be shelled, and the failure of the UN to deliver the promised bits of medicine where it is most needed, are literally deadly mistakes and basic elements in the war crime that Assad’s forces committed today. The UN and ICRC’s silence and anonymizing the perpetrators, and Amnesty International’s avoidance of defining the crime as deliberate, covers the perpetrators and encourage them to keep committing what “amounts” to war crimes go, while the world keeps watching as it did for the past 5 years in Syria.