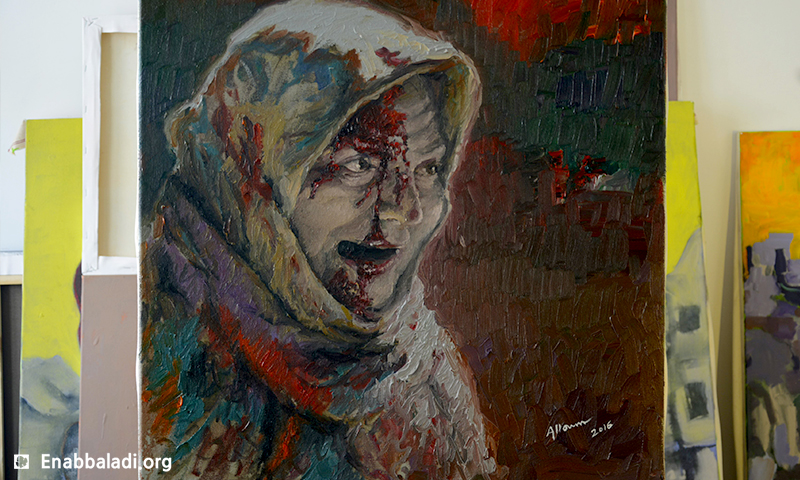 The feeling that Syrian painter Hossam Aloom was having after seeing the painful images of the bombing on Aleppo’s neighborhoods during the last campaign by the Syrian regime leaving tens of innocent civilians as casualties, was not any different from his fellow Syrians around the world.

The feeling of anger and sadness that he felt was interpreted through an artistic portrait which was given many names by Syrian activists, such as: “the Syrian Monalisa”, “Syrialisa” and the “The Aleppian Monalisa” and more.

In an interview to Enab Biladi, Aloom explained that drawing his portrait was based on the interaction and contribution to talking about the reality that Syrians are living, saying “I talked about the reality through my style as a human first, an artist, and as a Syrian, because I couldn’t be silent about what’s happening in Aleppo.”

“The louver is what made the Mona Lisa”

It took a ten-hour session to paint the portrait according to Aloom, in which he expressed the agony and the pain that he felt, and considered it his way of expression, “ some people curse, others demonstrate” adding “we have many ways of expression, I couldn’t sleep the night I painted the portrait”
“I’m not a writer nor a novelist  I’m a painter” said Aloom pointing that “a work of art sums a thousand word”, and he expressed his delight that people loved his portrait and that he succeeded in delivering his message and feelings .

The Syrian artist wished that someday Syria could embrace a museum like the French louver, which would include the most famous painting in the world; The Mona Lisa, and to introduce within it his work and the thousands of other’s work that embody the suffering of the Syrians and immortalize the current era, adding that “the Louvre is behind making the Mona Lisa thee Mona Lisa.”

A wide spread with many names

Many Arab activists and Syrians shared the portrait, many media and media personals shared it too such as Faisal AlKasem, Khadija Benguenna and others.

In return Algerian Human Rights Activist Anwar Malek published the portrait on his social network accounts and wrote “I will call it Syria Lisa which will sting the moods of the tyrants, extremists and invaders through the ages to come… Mark my words.”

The portrait is about an Aleppian woman coming out of the rubble and the destruction caused by the shelling on the city of Aleppo on the 28 of last April, which received international widespread.

People who shared the portrait did not mention its painter who previously participated in drawing the largest painting in the world, “The Angels of Syria,” which was painted using the names of the children of “martyrs” in 2014.

Hossam Aloom a 1986 born painter from the city of Al-Souaida, a fine arts graduate from the university of Damascus, specialized in photography and oil painting, participated in several exhibitions in European countries one of which is the Netherlands during the exhibition “Syria Our Home”, as well as Belgium, Germany, and all his drawings reflect the current era prevailing in Syria, within the Concept titled “ashes.”

Hundreds of Syrian artists embodied the reality their country is experiencing in different ways; some of them participated in concerts and opera singing, some of them work on other fronts, while dozens others organized exhibitions that mimic the reality of their peers back home.