A workshop in Aleppo to support formerly detained women 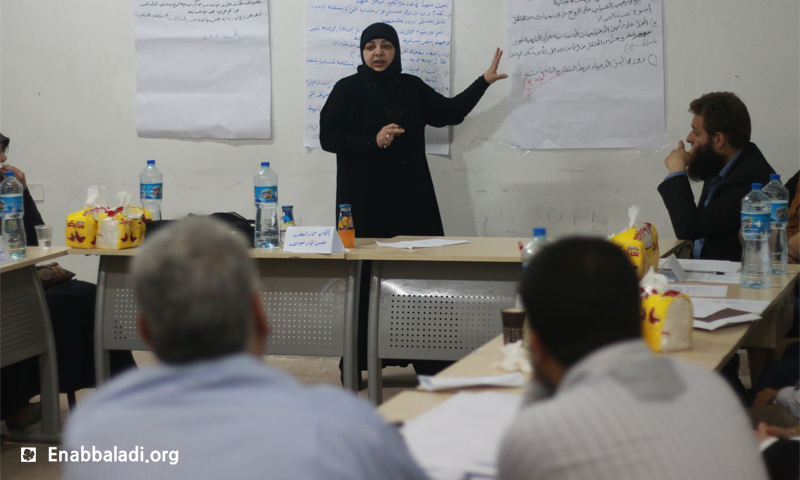 Zein, a girl from the city of Aleppo, was arrested in November 2013 and released earlier last year. She tries through her participation in workshops (first of which just ended on Monday, April 18th) organized by the Syrian Institute of Justice to raise awareness towards the way of dealing with the female survivors of arrest.

Zein spoke to Enab Baladi about the reason behind her arrest, which was “volunteering in field hospitals”, pointing out that she aims at shedding the light on the importance of taking care of the detainees after their release through psychological and physical centers.

“The Syrian Institute of Justice” under the supervision of the local council of the city of Aleppo organized the workshop. According to Abdul Kader Mando, the Institute manager, they aim at organizing other consecutive workshops regarding this subject; each of which would last for two days in order to mainly highlight the laws that protect women during the conflict. He also puts forward conceptions in regards to the condition of the released woman and the challenges she would face.

In an interview to Enab Baladi, Mando adds saying; “we have explained during the workshop how would the local council support the detainee females and empower them after their release”, as the campaign is directed to the members of the city council and neighborhoods with a basic aim at raising awareness of councils to the urgency of taking care of the survivors of arrest.

The first workshop resulted in a number of recommendations to be followed up by a committee of local councils, whereas the manager of the institute asserts “we will provide meetings with organizations concerned with women support, so that we organize workshops between the two parties to employ the different experiences which would all serve the best interest of the detainees.”

In his interview with Enab Baladi, Lawyer Zakaria Amino, deputy head of Aleppo local city council and a member of the institute, considers that the integrating process of the detainees after their release back into the society is the most important matter to happen, in addition to “elevating the local councils’ level in order to deal with women in a way that befits them.”

Lawyer Mahmoud Daadou, head of legal department of the council, describes the situation as “dangerous”, pointing to Enab Baladi; “we have learnt from personal experiences of former female detainees and listened to their advice and suggestions.” He also called for the necessity of searching for precautious methods to avoid women from being detained.

The young Zein was arrested at AlMashareqa crossing in Aleppo to get transferred among the military security and police centers in each of Homs, Hama and Aleppo. She was also taken into Palestine Branch in Damascus (known to be one of the worst security branches in Syria), and spent the last period of her arrest between the Central prison in Homs and Adra Prison.

Zein says that she is still suffering in finding a psychologist that would understand her case and be able to get her out of the nightmares and the condition she is living in, as she was kept in a solitary prison for five successive months, when she was let out, she felt like she is suffering of autism, as she puts it.

The Syrian Institute of Justice, established in Aleppo, 2011 by a number of lawyers and academics specialized in human rights and criminal justice, along with Human Right Organizations, try to document the most important violations committed in Syria, and also seek building capacities of the local community and raise awareness according to the importance of these rights.