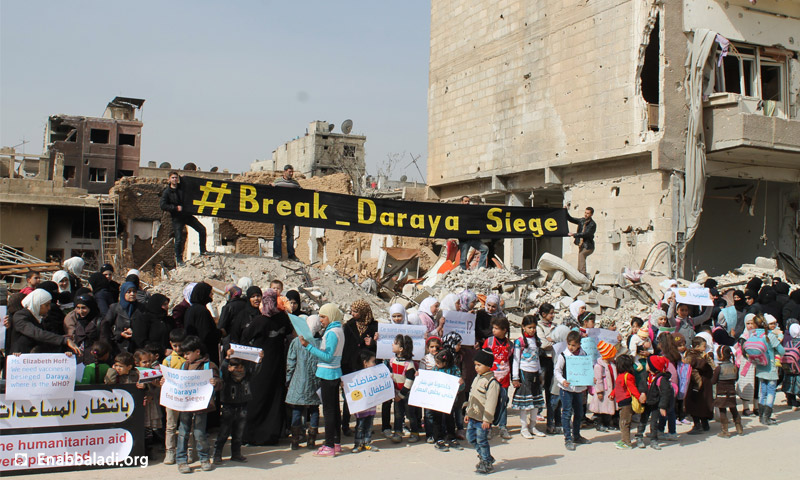 Women in Daraya have pleaded with the United Nations and humanitarian organizations to interfere immediately to lift the siege imposed on the city and provide it with aid.

A campaign held by “Women Now for Development” and “The Syria Campaign” to support the women of Daraya conveyed a statement issued by the locals. The statement stressed that Daraya is currently lacking all the necessary foodstuffs and medical supplies after the road to Moadamiya Al-Sham was closed.

The statement pointed out that cases of malnutrition have emerged in the city due to the lack of food, adding that locals have started cooking spices in replacement of real food. Infant formula is no longer available and breastfeeding is not possible due to the malnutrition.

The women urged the United Nations and all other humanitarian organizations in Syria to immediately interfere and provide humanitarian aid to the town as soon as possible.

“We call upon news reporters to write about Daraya to shed light on our crisis before the famine takes hold. Soon, people will start dying,” the statement said, adding, that “the children and elderly are the first who will die.”

Members of the “Women Now for Development” group, including women inside the besieged city, signed the statement. To sign the statement and show solidarity visit this website launched by Syria Campaign here.

About 8,300 civilians are living in Daraya under the siege after Assad forces closed the road linking the city to Moadamiya Al-Sham on January 25. The military campaign against the city continues in spite of numerous demands by activists to lift the siege and stop the daily killing.