“The time has come”… to define extremism and terrorism in Syria 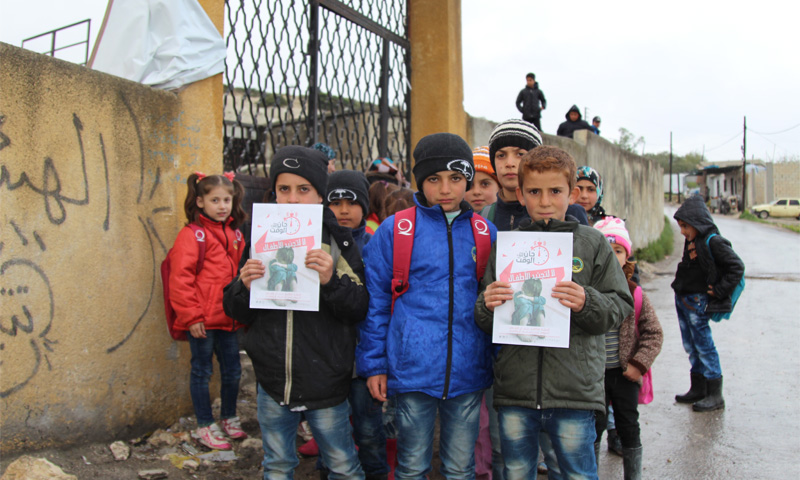 “It is time to speak openly and honestly… to stop the shelling of hospitals and the recruitment of children… to deport Daesh (the Islamic State) and its kin from Syria… to let the world know that the Syrian people are not terrorists or extremists, but rather that Syrian people are yearning for freedom and dignity”. These are some of the statements put forward by Syrian activists, to be slogans in their posters for the campaign “The time has come “, which was recently launched on the fifth anniversary of the Syrian revolution.

The campaign was launched after a lengthy preparation of several weeks, and is seeking to raise awareness about the phenomenon of extremism and terrorism- by using billboards and posters published by organizers in different parts of Syria, as well as by using ads on various social media pages.

Though the campaign was initially launched in Arabic and English, according to recent accounts, organizers are meanwhile seeking to further promote and expand it- by adding Russian, Farsi, and other languages”, so that the voice of its message can be delivered- from expatriates and refugees, to the Western societies to which they emigrated”.

Detainees tell of their suffering in prisons

Enab Baladi spoke with the media representative responsible for the campaign, Wisam Mohammed, who explained that the campaign includes other activities; most notably, conducting polls within Syria in finding out the causes of the phenomenon [of extremism] and its potential methods of treatment. Speaking to reporters, Wisam asserted that “We filmed a number of documentaries about activists, journalists, and citizens who were arrested earlier by the Syrian regime, or were abducted by one of the extremist groups, and spoke with them about what they had undergone and experienced during their detention.”

The members of the campaign, consisting of eleven members who operate inside Syria and six others who work inside Turkey, document the brutality of the Regime’s bombings, as well as its violations of the right of hospitals and schools. Additionally, they have worked in casting questionnaires, which were meant to inquire about the causes of the phenomena of extremism, as well as to explore ways in reducing it. These polls and questionnaires have been used to determine that, according to both residents and activists, the group most vulnerable to extremism- and the war’s greatest victim- happens to be children.

“A voluntary campaign with simple prospects”

The campaign is completely voluntary for Syrian activists- both at home as well as abroad- and works, according to Mohammed, “with simple and personal prospects”. He notes that it started in the provinces of Latakia, Aleppo and Idlib, before spreading to other regions- like the Ghouta in Damascus and the countryside of Hama and Homs. Mohammed further points out that “there is an ever-growing need and desire for activists to participate in the campaign.”

A member of the campaign, Maw’eed Al Hamawi, said in his interview with Enab Baladi that the campaign was “humanitarian, and far removed from any political party or military faction”. He further added that it also “distances itself away from any issue relating to intellectual extremism whatsoever, regardless of [the actions of] the current Regime, or the Shiite militias and other extremists”.

Abdel-Rahmaan Warad, a member of the Civil Defense in Aleppo, spoke with Enab Baladi and described the campaign as “important to educating parents and children about the phenomenon of extremism”, adding that the Syrian people are not extremist by nature, except in their fight against self-styled tyrants and State-sponsored terrorism.”

The campaign has faced many difficulties at home in Syria, however, and most notably with the people’s fear of speaking out in public against extremist and terrorist groups. This, according to the organizers of the campaign, who asserted that this fear is one of the main factors which has prolonged the preparation of the campaign, as organizers waited to erect signs and posters to provide them with  support, and enable the campaign’s staff to expand their activities and scope of work.