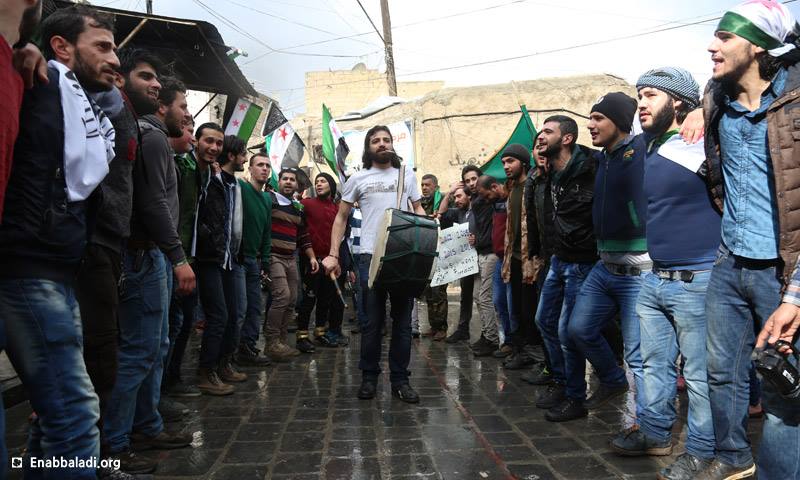 Syrian Art in Liberated Areas: An Orchestra without a Conductor

Syrian Art in Liberated Areas: An Orchestra without a Conductor

During the first years of its inception, specifically in 2012, the demands of the revolution motivated Syrians to express it in varied artistic means. It occurred with a simultaneous rise in the civil revolutionary movement. Theatrical and musical productions as well as dramatic writings, presented by young artists in the form of “Sketches,” discussed daily life for Syrians in the revolution and depicted the dreams and reflections of “Syria’s future,” in their works.

The year 2012 represented the Spring art linked to the Syrian Revolution. However, the increased violence that Al Assad regime imposed and the emergence of radical religious groups “who fought all kinds of art for religious considerations” caused the features of that “shiny” mosaic piece to quickly fade away.

The popular songs were replaced by rally songs that had sectarian tones. The graffiti paintings that expressed the spirit of the revolution were painted over with military slogans and factional banners. Some of the artists and virtuoso were arrested and the theatre, songs, and drawings were lost. These activities continued only over a small scale. Parents had a declining interest in teaching their children the arts due to the continuing violence and the pressure of the current economic situation. “This is a warning that we are going to have a new Syrian generation that does do not know anything about art,” said the Syrian playwright Hussain Buru.

This case brought the liberated areas of Syria—but not others—to a state of melancholy and grief. Nothing happens there except violence, bombings, and displacement. Media only portrays the massacres, the barrel bombs and observes the number of victims, while the artists hide their talents behind the border and board boats to countries of asylum. The remains of their work is ruins that only leave sorrow in the hearts of Syrians who continue to sing the songs of Al-Sarut and Al-Qashush until this day.

However, there are those who possess persistence and determination and who attempt to export art from the liberated areas despite the bitterness and the difficulties of life. Some parts of Syria began to look at some aspects of this Syrian culture and heritage as “taboo”. Others describe showing an interest in art as a “luxury.” Are there any traces of art left five years after the revolution? What qualities and characteristics does it hold? Do we have art establishments, institutions and project viable postwar?

The full report in Arabic here