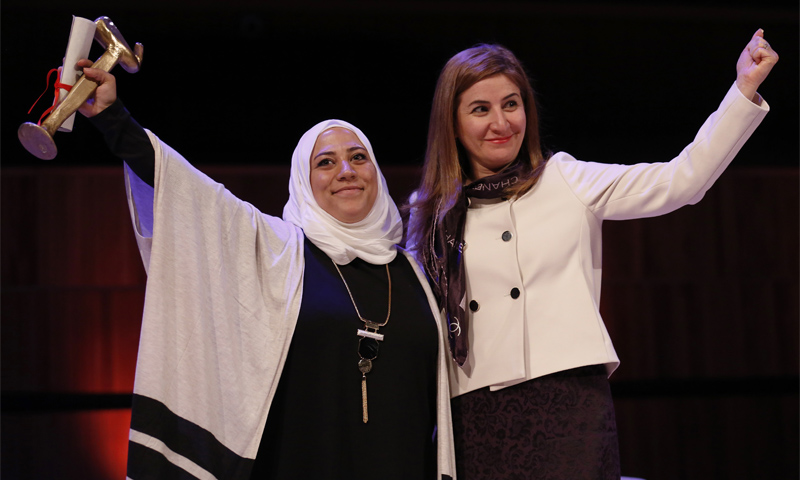 Syrian journalist Kholoud Waleed, co-founder of underground newspaper "Enab Baladi", and Vian Dakhil, Yazidi MP and former winner, after Waleed receives the RAW in War (Reach All Women in War) Anna Politkovskaya Award 2015 during the "Refusing to be Silenced" event at the South Bank Centre in London Saturday March 12, 2016. RAW in War supports women who stand up for human rights and injustice and who risk their lives in conflict. Anna Politikovskaya, a reporter most well known for her coverge of the Chechnyan conflict, was murdered in an elevator in her block of flats in 2006. Photograph : © Luke MacGregor +44 (0) 79 79 74 50 30 [email protected]

Kholoud Waleed, a female Syrian journalist, has been honored with the “Anna Politkovskaya” Award for excellence in journalism. She is the latest in a series of Syrian journalists operating all over the embattled country to receive a distinction for their coverage of the tumultuous events in Syria since the outbreak of the revolution in 2011. Waleed earned the nomination for this prestigious award largely in part due to the courage she displayed in tackling important social topics relevant to women in Syria.

In winning the annual “Anna Politkovskaya” award, presented by the organization RAW in WAR—an NGO designed to reach out to all women in war—Waleed’s name has been added to a growing list of Syrian journalists to earn accolades for their work. The award was accepted by Waleed on Saturday March 12, and came with special recognition for her “hard work” as one of the founders of the underground Syrian newspaper, Enab Baladi. This honor comes as Enab Baladi marks the third anniversary of the death of its editing manager, Ahmad Shuhadah, who died during a rocket attack on the town of Daraya in 2013. Shuhadah was the third worker the organization lost, following the deaths of Muhammad Koraytem, one of its founders, and Mohammed Shuhadah, a correspondent for the paper.

The initial announcement for Waleed’s nomination for the award came in October 2015.  Upon receiving news of it, she stated that the publishing of Enab Baladi helped expose the truth of the Syrian regime’s oppression and human rights violations in the besieged country, and that publishing process was a risk “in every sense of the word.” She added that the act of  printing the paper and distributing it to people located in the streets and in the doorways of buildings was “crazy”, but pointed out that it “stemmed from her belief in the greater cause, as she hung on to the dream called freedom.”

The award, which is presented annually to women working in the defense of human rights in conflict-zones throughout the world was named after the famed Russian journalist, Anna Politkovskaya, who was known for her opposition to President Vladimir Putin and Russia’s war in Chechnya. Because of her work and long-standing criticisms of Russia, Politikovskaya was assassinated on October 7th, 2007. Waleed, drawing comparisons between Putin and the Syrian dictator Bashar al-Assad, noted that “in the meantime, after her assassination, he (Putin) is still completely free, as is al-Assad, who has continued in his assassinations throughout Syria over the past five years, all the while using his brutal tactics to suppress the Syrian people, who have long aspired for nothing more than change and freedom.”

Kholoud Waleed, 31 years old, was born in the city of Daraya, and is also a founder of the Enab Baladi. She is also a member of the paper’s editorial board, which founded the news section and network correspondents in the newspaper, and still works as one of the paper’s editors. She currently holds a master’s degree in simultaneous translation from the University of Damascus, which she received in 2010.