The Center for Teacher Preparation in Aleppo Honors Top Graduates 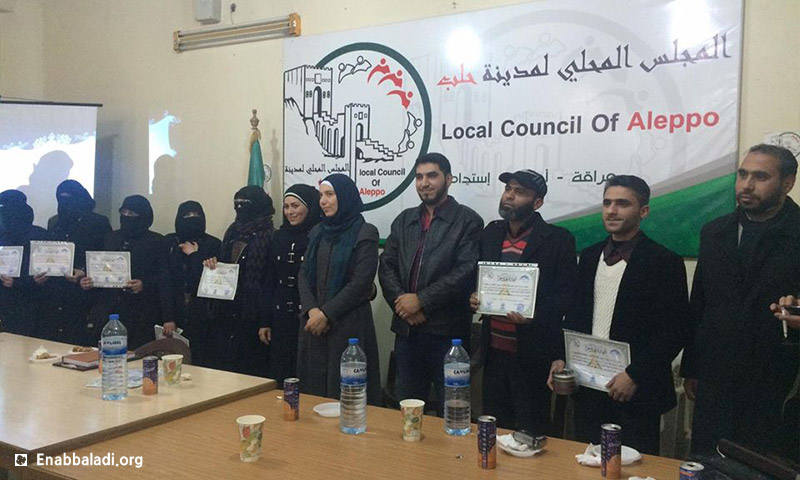 The Local Council of Aleppo, working in collaboration with the “Committee for Empowerment”, held a small ceremony at its headquarters- located in the neighborhood of Jisr al-Hajj, to honor the top ten trainees who graduated from the second session of the Center for Teacher Preparation, on Monday February 29.

The ceremony proceeded with an introduction to the course, which began this past year on the 30th of October, and included 110 apprentices and trainees- of which 86 graduated. The graduates then conducted a brief stage performance, which was followed by the presentation of certificates and honorary gifts to the graduates.

Nidal Badawi, the Center’s Director, stated that the session was composed of six “courses” in classroom planning and management, which included subjects such as- methods for teaching the Arabic language, active learning studies, calendar management, standardized testing, Arabic language, and mathematics.

Speaking to Enab Baladi about the next upcoming session, which will run for two semesters for a span of six months, Badawi explained that it “will include 12 training courses instead of six, and will definitely add four additional subjects on science.”

For her part, Iman Hashem, President of the Executive Office of Academic Affairs and Sociology at the Council, said that the Center was established a year and a half ago, in cooperation with the Committee for Empowerment, and graduated its first session of students in just three months. Hashem further mentioned that this work had the effect of casting a “good light” on the city’s teachers. Hashem then called on the Center to overcome “difficulties”, such as the ones they faced in the first session, and acknowledged that the courses are aimed primarily at undergraduate students, remarking that “they are average university students, not specialists.” She further acknowledged that a committee of specialists and supervisors of the educational process “would work to assess the trainee’s individual performance in the schools in which they operate, as well as to monitor their teaching quotas.”

Coordination between the Center and the Board of Education

Mohammad Mustafa, Director of Education in the province of Aleppo, also attended the ceremony, and spoke to Enab Baladi. He stated that there was a strong working relationship and coordination between the Education sector and the Center, whose activities and testing is supervised by the Board of Directorate. Also under the Board or Directorate’s supervision, are the certificates which are presented to the graduates, and which are provided by, approved by, and signed by the Board of Directorate’s Examination Department.

The Center and Board of Directorate conducted standardized tests for trainees prior to their acceptance, according to Mustafa. Additionally, he remarked that the Center “carries a big burden regarding the training of teachers to be better,” and admitted that “generally, weaker candidates end up having a hard time.” As to the role of the Board of Directorate in Aleppo, Mustafa pointed out that upon graduation, trainees “will work to under the supervision of education authorities”, in going above and beyond all requirements and expectations. Graduates will then are expected to pass on to their fellow teachers all that they have learned during the course of the session.”

During the ceremony, Enab Baladi met a number of the graduates, including Yasser Al-Ahmad, who ranked fourth place among the graduates of course. Al-Ahmad thanked those who made this training possible- from mentors and educators, to teachers and supervisors. Speaking to Enab Baladi, Al-Ahmad asserted that in regard to all that he had learned before, the training had indeed left him with “a real and tangible benefit”. Furthermore, Al-Ahmad stated that the session included “important courses, which provided him with an interest into the practical workings of communication between teacher and student,” and pointed out that in his opinion, the course on active learning “carried the greatest benefit.”

“Stars from the sky lit up our route after the session,” a statement by Miss Zahra expressing her happiness having completed the courses. Zahra added that as far as she was concerned, mathematics and Arabic were “the most interesting subjects”.

According to those in charge of the Center, officials are currently working in cooperation with a number of other organizations, in seeking ways to avoid shortages of teachers and specialists, and in building capacity of those already qualified, in order for them to train additional teachers.