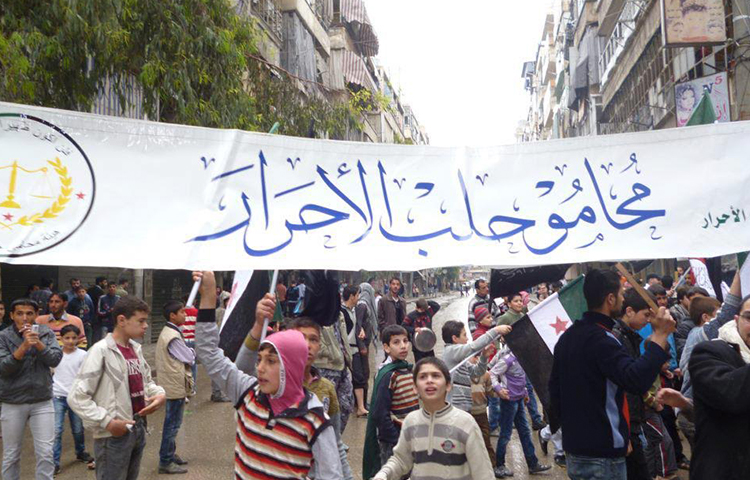 On the 10th of October 2012, during the start to liberation of Aleppo, a group of independent lawyers, judges who had dissented from the regime, and jurists from the brigades present in Aleppo called for the establishment of the Unified Judicial Council. The objective behind the council was uniting the judicial references, preventing the multiplicity of adjudications, implementing clear and specific laws that would guarantee rights, conducting speedy procedures that would avoid the routine bureaucracy of the regime’s judiciary, and avoids corruption and bureaucracy.

At that time, the Council included most of the courts in rural Aleppo and Idlib. At the time of its formation, the founders suggested implementing the Syrian state law given it does not contradict Islamic Sharia. After consultations with all parties and experts the High Unified Judicial Council decided to implement the Unified Arab law that is drawn from Islamic Sharia.

The Unified Judicial Council included the following courts: the Sharia courts that specialize in issues pertaining to Sharia (marriage, divorce, paternity, alimony…), the civil court (that pertain to property, sales, acquisitions, rent, mortgage, trading disputes,), and the partial judiciary concerned with crimes whether between civilians, civilians and fighters, or between soldiers themselves.

The Council is Accused of “Secularism,” and Serves as Ground for Dissolution

The majority of the “extremist” militant formations opposed the Council although they were present in the primary consultations when founding the Council. Given the Council sought to implement a specific law, these groups rejected the Council on the basis that Sharia cannot be canonized. These groups considered the Council “secular” and this was the major reason of their dispute with the Council. Jurists and jurisprudents argue that the real objective behind these factions fighting the Council is to gain influence and power by taking over the judiciary. On the day the Council was formed, according to one of the Council members, Al-Tawhid Brigade and Al-Fateh Brigade, the two largest military forces in Aleppo at the time, were the first parties to withdraw from the Council. Subsequently, some political and military affiliates to these factions interfered with the Council’s work leading to corruption and nepotism in both courts and the judiciary. At that point in time, honest members of the Council considered it to have begun collapsing.

Other factors contributed to the collapse of the Council. For instance, the interference of jurisprudents in the judicial work, especially in judicial procedures which they have no experience in. As a result of their actions, people lost confidence in the Council and the majority of the brigades started to fight it. The Council was dissolved in October 2013.

In October 2012, the Board was founded and it is a revolutionary judicial organization that includes independent lawyers and aims to provide defence lawyers in courts. The Board had a significant effect and contributed to all the establishments and activities in Aleppo. They also admirably managed to preserve what could be saved from old files and court cases and archive them electronically.

In July 2015, with the foundation of the High Judicial Council in Aleppo, the lawyers of Aleppo signed a fundamental organizational document to effect the lawyers’ work as agents in the High Council’s courts. As a result, each court includes an office for lawyers who wish to advocate before the courts.

After the withdrawal of al-Tawhid Faction, al-Fateh Faction, and the “extremist” formations from the Unified Judicial Council, they formed what is known as the Quatrain Board. It was established on the 15th of October 2012, it is a judicial board that included the strongest military factions present in Aleppo at the time. It included Islamic Free Movement of the Men of the Levant, the Islamic Dawn Movement, Al-Nusra Front, Al-Tawhid Faction. It started its work by opening offices in different neighbourhoods in Aleppo from al-Fardos, al-Sukari, al-Haritan, al-Bab, Azaz, and Adnan. They also extended to the countryside of Idlib to area such as Binnish, Bab al-Hawa, and Sarmada. The Judicial Board in Aleppo was considered the main office and the others were branches.

According to jurists who worked in the Judicial Board, the first seven months were the best months regarding the work of the Judicial Board. After that, the situation worsened and corruption became rampant, especially after the withdrawal of the strong brigades from the Board.

What are the most important reasons for the weakness of the Board’s main office?

The different military factions held president-ship of the Board for specific periods of time. This was one of the main reasons for the Judicial Board’s weakness. Jurists explain that forming a Shura council of all the factions would have better guaranteed the work of Board in an institutional way and enabled the Board to undertake its work in a balanced manner.

Another reason the Board was weak is because most cases jurisprudents rather than jurists took the position of judges. They did not have the necessary experience in judicial processes in many cases. Also, some of the “independent lawyers” working in the Board were corrupt and this affected its reputation amongst the people and drove some factions to fight it.

Aggravated Corruption in the Board, and Altering its name did not save it

In November 2014, the Judicial Board formation collapsed and changed its name to the al-Sharia Court. Abd Alkader Al-Flas, its new head, tried to limit its work to the judiciary alone and moved control over its service offices to Aleppo’s Governance Council. The service offices provided food supplies, infrastructure, education, planning, maintenance amongst other services. According to a judge who worked with the Judicial Board who did not want his name disclosed, the Sharia Court’s performance did not improve with regards to corruption following Al-Flas’s moves rather corruption increased. The judge attributed the increase in corruption to the control of the security faction affiliated with Al-Sham Front over the work of the Sharia Court. As part of their control, security persons interfered in the work of the judiciary.

On the 30th of July 2015, the establishment of the High Judicial Court in Aleppo was announced. The move lead many jurists to become optimistic that the High Court was a move towards creating an equal judiciary, unifying judicial references, achieving the independence and integrity of the judiciary.

The High Council was formed from a number of courts whereby its central focus was unifying these courts and organizing the work between them. Sheikh Khaled Al Sayed, the Council’s official spokesperson, spoke to Enab Baladi about the Council’s structure explaining, “It is an independent character that oversees the organization of judicial work. It organizes the work of judicial and administrative courts. It serves as a judicial reference for these courts and implements the legal procedures that the courts must abide by.”

Citizens; however, explained that the Council follows Nour Al-Din Al-Zaniki movement, given it is one of the strongest military factions in Aleppo. On the other hand, according to several jurists, the Council is a “move forward,” in the trajectory of the judiciary in the liberated areas. They also voiced their opinion that the Council is performing better than the former Judicial Board.

With regards to the structure of the Council, the relationship between the courts and the Judicial Council is defined through the representational mechanisms. Sheikh al-Sayed clarifies the mechanisms, “The president (head) of the appeals court in every central court is a member of the High Judicial Council. This form of representation enables every court to communicate with the Judicial Council in a direct manner. Also, as being able to communicate with the Council’s offices namely, the president’s office, the vice president’s office, the office for investigatory judiciary, the case-study office, and the attorney general’s office.”

Al-Sayed continued, “The responsibility of the investigatory judiciary is to monitor the court’s work by going to the courts. The office is also responsible to take complaints. The case study office researches current cases, it treats them according to the jurisprudential and legal framework, and issues memorandums for courts to unify their work.”

In the first place, the Judicial Council seeks to achieve “financial independence” from the factions, brigades, and funders inside Syria who are controlling decisions. According to al-Sayed the aim is to “achieve an independent judicial body,” and he continues, “Funding is of the most difficult obstacle that the Council faces.”

Most of the Free Syrian Army brigades, those that fundamentally agree with the idea of unifying the judiciary under one unified law, have collaborated with the Unified Judiciary Council. Most of the courts joined the Council, except those that systematically objected to the Council such as the Haritan court that is part of the judiciary houses of al-Nusra Front. Other groups who rejected coordinating with the Council did so due to a lack of resources or funding.

There are Unified judiciary continues its efforts to limit the activities of brigades, their violations in the form of arrest operations, interrogations, and torture as Khaled al-Sayed explains: (video)