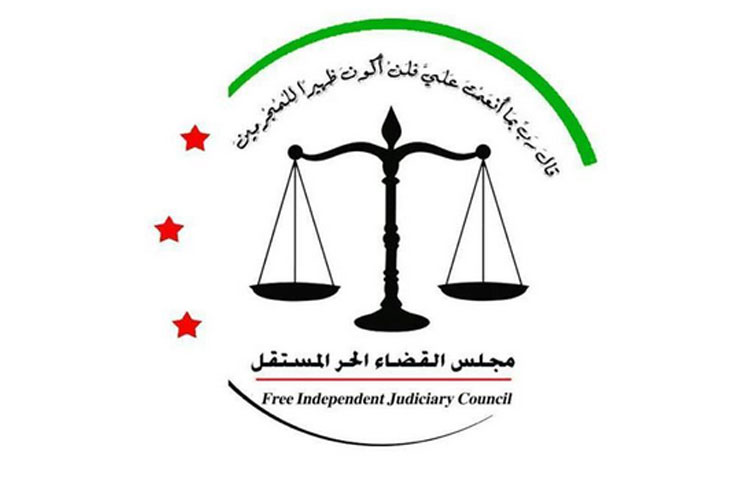 Dissidents form a council and armed factions make it fail

According to a legal source that has been following the council since its establishment, ‘The Free Independent Judiciary Council’ was established in September 2012 following the dissidence of four judges. The judges are Anwar Majni from Aleppo, Talal Hushan from Hama, Juma Dibis from Raqqa and Khaled Shihab from Aleppo. The council started a number of initiatives and structures for the judiciary body. Certain judiciary bodies were formed and started functioning early in 2013. These bodies played a significant role; nonetheless, their role was quickly minimized by armed factions which caused the failure of an independent judiciary that might hold the armed factions accountable.

How do armed factions see the Independent Judicial Council?

Armed factions took two different stands towards the Judicial Council which see the implementation of Syrian state law as a temporary necessity until the end of the revolution.

Some armed factions wholly rejected the implementation of the Syrian state law. The ‘extremist’ brigade held this stand. Also, they fought laws and judges and any project that aimed to continue using the Syrian state law because they approach the law as ‘a production of Sultans and implemented in blasphemous countries.’

However, what is interesting is that the brigades which hold this strict stand do not acknowledge each other’s established courts because each brigade sees itself as implementing Sharia the right way and considers others to be implementing it wrongfully.

Other brigades want to implement the law, but reject the Syrian state law on the basis it is secular. These are the ‘moderate’ brigades. They insist that it is necessary to replace the Syrian Law with another law that is derived from the Islamic Sharia.

Judge Ibrahim Hussein: The Syrian Coalition is Responsible for Failure of the Legal Council

There were two main obstacles for the function of the Legal Council which Ibrahim Hussein, Spokesperson and member in the council revealed to Enab Baladi.

In this regard, Deputy Minister of Syrian Interim Government, Khaled al-Helou, told Enab Baladi, ‘Although the Coalition has fallen short in this; however, the Coalition supported the dissident judges of the regime financially and that made them maintain Syrian Laws. Also, that helped them document the regime’s crimes.’ There are efforts to cooperate with the Interim Government to establish a project to administrate liberated areas.

The second obstacle is the absence of an executive authority to implement courts’ decisions. Armed brigades and factions are responsible for this in a complete way. The armed factions did not provide an independent armed force that works in coordination with the judicial facility. In contrary, the armed factions moved to establishing Sharia Boards which are affiliated each with a different armed faction.

In spite of the obstacles that the Legal Council faced, it is still functioning and expanded to include 85 judges. Judge Hussein indicates that they as legal experts collectively reject all courts inside Syria whether Sharia based or Peoples’ Courts. He adds, ‘we said before that these courts are emergency courts, but that does not mean they have not made mistakes. We see that the establishment of these courts in these circumstances, their procedures and mechanism may lead in many instances to the courts’ involvement in war crimes based on the Roma Regime for International Criminal Court. We hold onto our principles and work as legal experts to come out with a unified vision for the future of Syria. We propose our ideas to people and civil organizations and Syrian institutions to deliver our thoughts to brigades and reject the judiciary in the aforementioned form.’