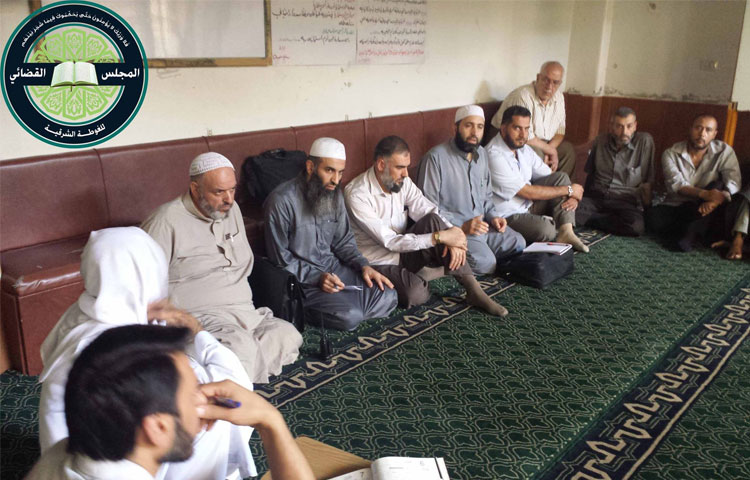 Before the liberation of Eastern Ghouta, chaos, kidnapping and assassinations were widespread because of the regime withdrawal from some cities and the weakened control of the regime in other cities. As a result, the first phase of judiciary began in the middle of 2012. A group of judges and lawyers would go to revolutionary centres to check the minutes and interrogate the suspects for trial. At this stage, the functions of judiciary in Eastern Ghouta was very chaotic because of the existence of many armed factions and their divisions. Some armed men would improvise and put detainees on trial without the presence of judges. The verdicts would go as far as capital punishments.

Jurists describe this stage as tribal because of the multi authority references. The issue was tackled later on by forming a unified judiciary and unified military leadership.

Although the judiciary’s activities were chaotic at this stage, but judges’ actions still limited incidents of kidnapping, assassination, and capital punishments without trial.

Following the liberation of the Eastern Ghouta, the Shura Judiciary Board was formed towards the end of 2012. Courts were divided according to speciality and judges became more professional. After the forming of the Board, according to a specialized lawyer Abu Yousef, several graduate lawyers were appointed as judges in Eastern Ghouta.

Abu Yousef says, ‘The judiciary at that point was faced with organizational difficulties. There were no judges in the judiciary, so they would improvise procedures to deal with the phase and its necessities.’

On the other hand, the verdicts would go through legalists and jurisprudents before they were authenticated from the Sharia. The legal judge would issue it in his name even if it conflicted with perspective of Sheikhs. In case of scientific conflict in a case between two judges, a third judge was brought in to settle this the contentious issue.’

Records of Files and Lawsuits in Eastern Ghouta

Prior to the liberation of Douma by 6 months, the regime transferred Douma’s courts and all its registers to al-Tall City. Subsequently, most modern files were transferred and only archives remained in courts’ warehouses. These are large amounts of old files. Some of the files were damaged because of shelling and destruction, and some were destroyed due to exposure to weather conditions. However, the Shura Council instructed several expert administrators to clean and archive the files. The archive was transferred to a safe place and put under the control of the Judiciary Board.

Unified Judiciary in Ghouta and Independence from Armed Brigades

In the middle of 2013, the Unified Judiciary was founded. It was activated after other courts’ stopped functioning in October 2013. According to Abu Yousef, the Unified Judiciary is considered to be independent from the hegemony of all brigades. The board’s independence is considered one of its principles. The Board only benefited from armed factions when they authorized it at the time of its founding. But, administratively the Unified Judiciary is subordinate to the ruling authority. The ruling authority, in this case, is represented by the Unified Military Leadership which was formed from a meeting of particular factions’ fighting in the area. The meeting included three representatives from three armed factions fighting in Eastern Ghouta: Jaysh al-Islam, Faylak al-Rahman, and Islamic Unity.

Abu Yousef pointed out that, ‘Judiciary today is not interested in armed ranks. For the judge, all contested parties are equal. The only exception made for military personnel concerns procedures of notifications and summons. Notifications or summons might be obstructed because of fighting on the fronts and fervent battles with the enemy at most times. In this case, the faction would be notified instead of the mujahid.’

The Qualifications of Judges in Ghouta

The judge appointed should have at least a law degree. Exceptionally, several senior law students who had not graduated were appointed because of work pressure. Jurisprudents should not be appointed as judges. According to Abu Yousef, a number of armed brigades pressured the council to appoint jurisprudents in order to hide behind contentious jurisprudents.

Syrian Law is a Judicial Reference with some Reservations

Abu Yousef highlighted that the judicial reference in Unified Judiciary is the Syrian state law. The judiciary omits any parts of the law which explicitly contradict original Islamic legislation, but if the law contradicts an interpretive/ijtihad jurisprudence and if it was preponderant, it would not be omitted. The Syrian state law would be followed based on evidence even if it was not public opinion.

Amendments vary in the courts’ sections. For instance, in civil and Sharia courts, Syrian laws’ provisions do not contradict Islamic Sharia legislations much since it was derived from Islamic Sharia.

Abu Yousef says, ‘Things are different when it comes to the penal code. The categorization of some crimes in the Syrian Law is not correct like sodomy, adultery, some types of theft and their punishments. Taking into considerations the studies presented by Sharia boards inside of Syria and Islamic scientific research centres abroad to stop prescribed penalties in state of war. Also, not implementing prescribed penalties on crimes. This became public order and it cannot be violated.’

‘In the event of any defect in judgment or confusion related to legal and legislative rooting and causation, the Unified Judiciary refers the case to specialized researchers in research departments in the General Sharia board. The later presents a special research in the contentious case. The final opinion is the judge’s and he makes the final adjudication according to his words and convictions.’

‘In order to guarantee that the judge does not make a wrong judgment, an appeal mechanism was formed. Based on the appeal mechanism, the contested parties appeal the decision of the judge based on the causation or not giving the full right of defence or contradicting the guarantor procedures for the proper course of judiciary action. The Syrian law is adopted in terms of procedures with few amendments because of state of war,’ he adds.

A Sophisticated Mechanism for Detention and Summons

The Eastern Ghouta police corps take on the tasks of detention and summons. Before the police corps was formed, there were directorate for areas. Military personnel were prohibited from detaining or notifying people of court cases against them except in security cases. The security office has the right to follow up provided that the office obtains a judicial warrant before any arrest.