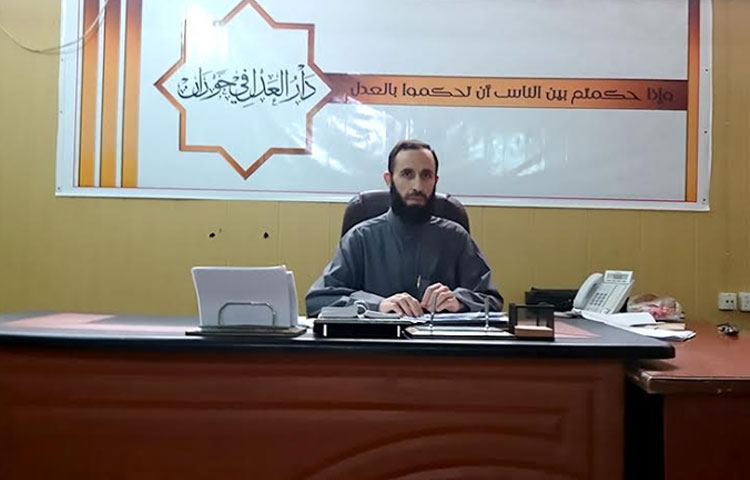 The judicial houses began in Hawran in the form of miniature Sharia boards set up in villages, cities, and strips. The earliest of these boards were: The Sharia board in the Middle Strip, the Medical Court, al-Giza and al-Masyfert Court. The situation later settled on the existence of three courts simultaneously, (Gharaz Court, al-Qawabir Court that was subordinate to al-Nura Front, Jalyn Court that was subordinate to the Islamic al-Mouthna Movement). Later on, these different courts aligned in addition to other independent factions to form “Justice Courthouse.” At present, it is the only court existent in Hawran.

According to Osama Al-Yatim, the head of the court, “the courts’ performances at that time can be characterized as judicially weak and duality in the judiciary as a result of the multiplicity of courts. At the same time, it was characterized by a strength in implementing adjudications because each court was subordinate to a strong faction. On the 10th October 2014, the Justice House was launched. It is formed of independent jurists, legalists, and administrative persons who are not subordinate to any faction internally or externally. The Justice House depends in its finances on donations from some of the brigades. There is no connection between it and the Interim government.”

When the Justice Court House was founded, no particular laws were relied on. Rather approved on courts’ charters and courts’ filings were relied on. According to al-Yatim, at present the Unified Arab laws are relied on as one of the main judicial references and the law will be worked on soon.

The Justice Court House has tried to be fully independent from the hegemony of the military brigades but it has been forced to placate these brigades. It has to placate them as “establishing justice and deterring tyranny,” is considered a collaborative action between the courts and the brigades in the absence of state institutions. According to the testimony of Judge Osama al-Yatim, until now the brigades play a negative role in the work of the Justice Courthouse. Their negative role manifests in their lack of cooperation with the Justice Courthouse in executing court decisions, weakening the response to court decisions, and withholding the necessary, and large, funding that the judiciary requires to function fully.

With respect to arrests and summons, al-Yatim confirmed that the Justice Courthouse is officially responsible for these. Summons are only executed with an official warrant, and the court has a force/authority specialized in summons. However, due to disturbances some brigades have committed transgressions by arresting persons of their own accord.

In all the liberated areas, the recent nature of the judicial experience is one of the biggest obstacles that courts face. In addition to the many “calamities” that require qualified judges. Cultivating the judiciary to meet the current needs, requires long periods of stability and repeated training. Additionally, the current judiciaries in place lack the necessary police force to maintain security and execute court decisions. Other than these, the current judiciary bodies face a weakness/lack of funding whereby their overall funding is limited to some donations.

According to the testimonies of many of jurists, the Justice Courthouse in Hawran is considered, until this point in time, one of the most successful judicial experiences on a national scale. Those working in the Courthouse are institutionalizing it for the Courthouse to become a cornerstone of the Ministry of Justice in the future Syria.

In the recent Conference of the Judicial Boards that was convened in Reyhani in Turkey, the Judicial Courthouse alongside the unified judiciary in Eastern Ghouta achieved first place. The Courthouse was honoured with the agreement to establish an institute to prepare judges. Preparations to build the institute are currently underway.