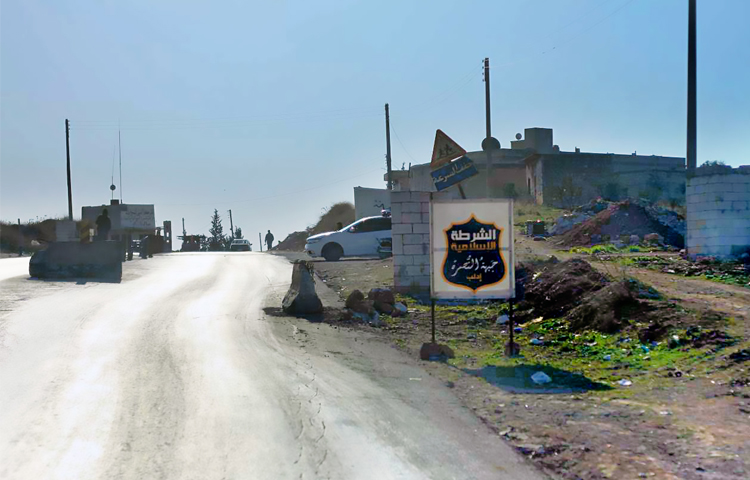 Layan al-Halabi-Enab Baladi
Al-Qaeda affiliate in Syria Al-Nusra Front dominated new strongholds and checkpoints in Aleppo city in a rapid and ambiguous military movement, in conjunction with kidnapping operations causing Aleppo activists and residents apprehension and fear of possible consequences of their military movement in the city.
Al-Nusra Front installed three checkpoints on Tuesday, 19 January. Al-Nusra installed the main one on the only route connecting Aleppo to its northern countryside, Kastilu. The other checkpoints, one is on al-Sina’aa Square in Bab al-Nairab district and second in front of al-Kanj Gas Station in al-Kalasah neighbourhood.
According to activists in the city, al-Nusra Front seized new strongholds in the last few days in several areas like al-Mashhad, al-Mughayer, al-Firdoos, and some eastern districts.
Activists reported that eyewitnesses said that al-Nusra Front, last Monday, seized closed ‘shops’ close to Abu Hurayra Mosque in al-Firdoos neighborhood. When the neighbourhood residents condemned the act, al-Nusra threatened them and took over the shops by force.

The military movement of al-Nusra Front in Aleppo was met with suspicion anxiety from armed factions in the city of Aleppo.
Researcher and writer, Ahmad Abazeed, resident in the city tweeted, Wednesday,
‘al-Nusra military movement comes after Abu Firas al-Suri’s article, in which he declared armed factions in Aleppo treacherous and infidels. He called for oppressing and fighting violators. Al-Nusra new operations created an atmosphere of distrust and apprehension.’
‘Armed factions in the Syrian north fear al-Nusra intends fighting them. The front needs to build trust not undermine it. We share the same battle with our brothers in al-Nusra Front and that is fighting the Assad regime. There is no difference in martyrs blood. But you would be deceived to think things between armed factions are going well,’ Abazeed added.

Activist (A.K), refused to mention his full name for security reasons, denounced permitting al-Nusra take new strongholds ‘without having linking points in those areas’ he said to Enab Baldi ‘they are redeploying in several districts like al-Kalaseh, al-Mughayer, these are the roads that ISIS depended on and then now al-Nusra to kidnap activists. The last activist who was kidnapped is Abu Majed Karman.’
He added that he fears this expansion means more kidnapping in the city ‘they kidnapped Firas al-Sahhaf who owns an internet shop in al-Zabdiye neighbourhood three weeks ago, for no reason and from his shop. We are afraid this will go on.’
Azan (Prayer call) time is a reason for detention
Azan reciter in al-Dalati Mosque in al-Shaar district, Zakarya Bustani, was kidnapped on 18 January for not calling for prayer according to the times set in al-Nusra Front special calendar. According to a media activist, refused to mention his name, this incident made activists more concerned about their security.
Bustani was released the next day. It seemed the incident was a warning for the azan reciter according to an activist.
‘Abu Islam, Abu Saleh, and Abu Majed detained the reciter and took him to their stronghold in al-Muwasalat area,’ the activist said.
Abu Islam and Abu Saleh are officers who manage mosques affairs at al-Nusra Front.
The activist described them as ‘problem makers in the mosques of Aleppo.’
Al-Nusra Front like other armed factions adopt its own calendar and azan times differ accordingly.
The activist added, ‘we residents of Aleppo are used to differing times of azan. It differs from one neighbourhood to another since each armed faction has its own sharia scholar who run decides on such issues. It is also the same in the villages of Idlib.’

Media activist Muhammed Khaled from Aleppo told Enab Baladi about al-Nusra expansion in Mosques of Aleppo using its religious endowments office.
He said, ‘al-Nusra Front took over a considerable number of mosques. After it took control, they removed several orators and former Imams and replaced them with people from their side after giving them special training.’
Muhammed explained that al-Nusra Front has religious endowment offices. They established them before al-Nusra’s role was undermined in the city.
The office runs Sharia schools and mosques. Muhammed suspects them and their appointed persons.
He said, ‘whoever has a religious inclination, has to go to a special training for two months. After which he becomes an orator and gets appointed in one of the mosques in his area to inform about the area.’
The mission of this orator or prayer reciter is to transmit news of Free Syrian Army and civilians in the area in which he is deployed. He reports the news on regular basis to the religious endowments office according to Muhammed; in addition, ‘al-Nusra Front uses this mechanism as a platform for its ideas and approaches.’
Muhammed recalled an incident, saying ‘when few fighters of Suqour al-Ghab Brigade tried two months ago to install a wireless tower on the minaret of Fajer al-Islam Mosque in Tareeq al-Bab district, the orator prevented them from doing that and asked them to ask for permission from religious endowment office or from al-Nusra. Later, three al-Nusra cars stormed the district and their masked men expelled the young men from the mosque.’

Al-Nusra Front: The fighters are sons of Aleppo

Enab Baladi contacted al-Nusra Front’s media office. The spokesperson, Abu Muhammed al-Suri, said ‘the ones who recently returned to Aleppo are leaders and soldiers of al-Nusra Front and they are also the sons of Aleppo. They left a year and a half to Idlib and its countryside to participate in liberation battles there. Their mission there finished and now they returned to their areas and districts.’
The spokesperson asserted that ‘those leaders and soldiers are known by armed factions. They participated in liberating the city formerly, they neither have ambitions nor looking for gains in the city.’
‘They returned and found Aleppo in a very tragic state. Aleppo is about to be sieged in addition to its shelling by explosive barrels. They saw that the linking points are the same like two years ago if not receded backward. These are the reasons which pushed al-Nusra to send reinforcements to the city to occupy important points to do military action in larger way against the enemy,’ he added.
‘As a result of Our movements in the city, rumours spread and negative reactions came from some factions and brigades like Ahrar ash-Sham in al-Sukri district. They sent a threat to al-Nusra to evacuate its stronghold in al-Sukri or Ahrar ah-Sham will evacuate them by force. So, it’s natural that we installed checkpoints to protect the our stronghold and the workers there who are about 10. Finally, the thing went well. We are entering a new phase and forming new common checkpoints with all the factions in Aleppo.’
Regarding the detention of Zakarya Bustani, the spokesperson of the media office abstained from responding and said the incident has to be investigated further from the two sides, it is ‘a judicial case not an opinion.’
The recent military movement of al-Nusra comes in conjunction with Assad regime advance in southern countryside of Aleppo and the movements of Islamic State and Kurdish Protection Units and al-Thwar army in northern areas, a source of concern at this time.
Some see there are persons behind the scene who are trying to make al-Nusra Front perceived as ‘evil’ and show the ‘Fanatic’ and ‘extremist’ side of al-Nusra.
These hidden persons ‘obliterate’ al-Nusra military achievements in the field. Others accuse al-Nusra of diverging the path of the Syrian revolution against Assad regime and seeking to establish an ‘Islamic Imare’ in Syria.