What was Once Called Eid: Coffee, Sugar and a Gift 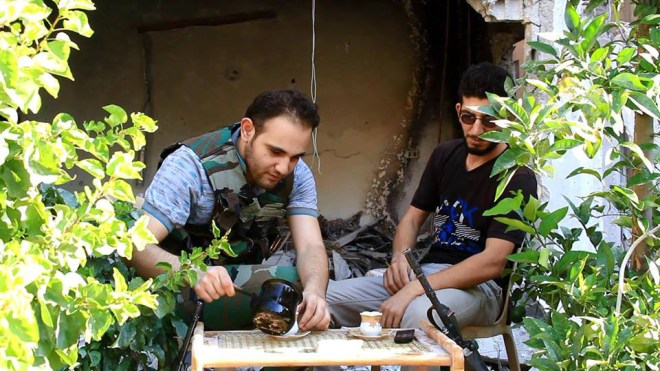 Within eight minutes and through two characters played by Karam Alshami and Muhammad Al Imam, What was Once Called Eid presents an image of the city of Daraya and depicts the suffering of its besieged people through the dialogue and the scenes of the destruction in the city.

On the morning of the first day of Eid, Karam invites Abo Rashed (M. Imam) to a cup of coffee “with natural sugar” -indicating the scarcity of its availability in the city. Throughout the dialogue, the difficulty in communication between the besieged in the city and their displaced families outside and the suffering of the displaced from the city are highlighted.

On a road surrounded with destroyed buildings after a barrel-of-explosives shelling, the two friends head towards the cemetery where Abu Rashed’s family is buried. The film ends with Abu Rashed kneeling on the graves talking to his parents, who died during the ongoing military campaign on the city, and putting a teddy bear on his sister’s grave.

Karam in turn talked about the difficulty of his first acting experience: “standing in front of the camera changes your preconception about acting and about the role”. Karam pointed out they had to shoot most of the scenes many times until they became ready for release.

According to Karam, the film cannot be considered mere acting; it is a reflection of reality. Abo Rashed and Karam have lived the same experience, and it is not just acting for them.

Shadi, one of the film crew members, talked further about the difficulties the staff faced such as the difficulty in securing the needed equipment. They had to prepare a hand-made camera dolly and to use a wooden stick to move the only microphone they have between the two actors.

About the montage, Malik, one of the filmmakers, said that some of the flaws in filming were not spotted until the montage started; consequently, they had to re-film all scenes again.  In addition, they had to divide scenes and produce each part separately, and then combine them due to the lack of a powerful computer. Malik pointed out that the whole work took ten days, four of which were for the montage.

According to Enab Baladi’s correspondent in Daraya, “What was Once Called Eid” was prompted by the LCDC Media Department, which had encouraged two five-person teams to compete in producing a short film about the city during the last month to be released on the first day of Eid.

Although many people inside the city have not had the chance yet to watch the film due to the bad internet connection, the film –according to the team- was received with approval and delight by the audience, who are waiting for other productions. The film team said that the film was not effectively promoted; however, their hope is that next productions will achieve broader distribution.

What was Once Called Eid is a short film, produced by five of Daraya’s youth; it depicts an aspect of the people’s lives on the first day of Eid in the city that has been besieged for over a year and a half.