The Spring Festival stresses the cohesion of Syrian Al-Jazzera 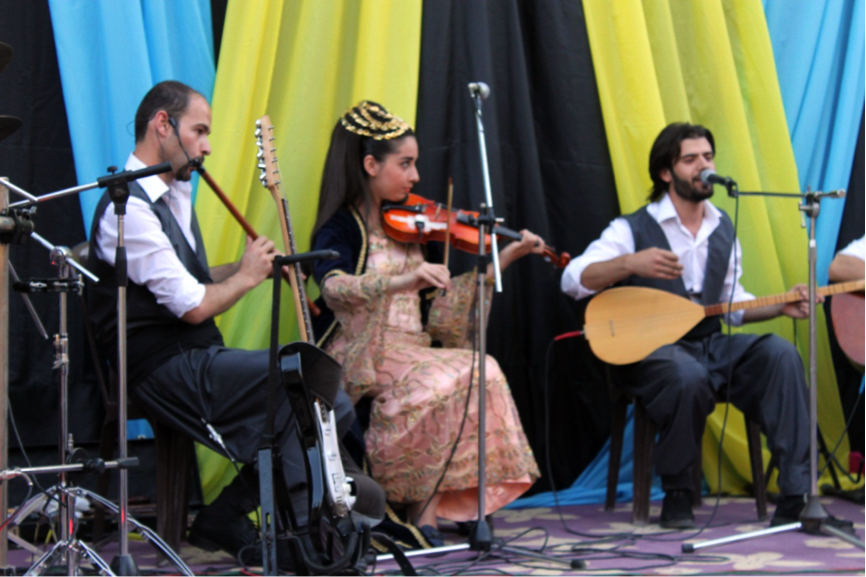 For the second year in a row, the Spring Festival was held in the city of Qamishli. It lasted for 5 days, in which many activities and intellectual and cultural events were organized. The attendance was remarkable and included many cultural and political personalities in Qamishli.

The festival, which took off on April 26th, was organized by “Sawa Youth Coalition” and the “Arido” Civil Society Center, and sponsored by “PÊL- Civil Waves” and the Syrian Emergency Task Force. It was held under the title “our colors are our bridges”.

The organizers of the festival aim at “building bridges between the components of the region of Al-Jazeera in Syria, which include Kurds, Arabs, Syriac, Aremenians, and Ashurs, and strengthening ties of co-existence between all these components,” said Shamoon Lahdo, one of the organizers. Lahdo indicated the strong ties between the components of Al-Jazeera in all of Syria: “the regime has worked for 40 years to dismantle these ties by implanting discord and hatred, not only in Al-Jazeera but in all of Syria. The likes of these events are clear evidence on the failure of the regime to pass its schemes.”

On the other hand, poet “Amanos Zaradisht,” who participated in the festival, described it by saying, “This festival acquired great importance since its first season. It could accommodate different cultures in the region, and it was able to blend them in a kind of breathtaking harmony.Then it represented them in a beautiful portrait that expressed the aesthetics of cultural diversity in the many components of Qamishli.” He continued, expressing his joy for participating: “I am really happy for participating in this gathering, and I wish it continual progress and success.”

The festival witnessed many artistic, musical, and cultural events. Musical band “Zara” presented many songs from the heritage of Syrian Al-Jazeera in different languages (Kurdish, Arabic, Syriac, and Armenian), while musical band “Qithara Ur” performed many songs in Syriac and Arabic.

The first day of the festival also witnessed the opening of an art exhibition that displayed drawings by artists May Qolanj, Nalin Hesso, and Fadi Khayo. The exhibition lasted for three days.

Artists seized the opportunity to display their works. Two documentaries were screened: the first was filmmaker Siamend Omry’s “Tales of Spring”; the second was Ghandi Safar’s “Seventy Pulses.”

The events happening in the region shed their lights on the festival, a thing that was clearly demonstrated in the two dramas performed in the third day. The director of the first drama, That which doesn’t Come by Jian Band for Dramatic Works, tried to reflect on the Syrian conflict (The conflict between good and evil). The scenario revolved around people who need freedom and a regime who doesn’t know mercy.

The second drama, entitled The Trial, discussed the spring revolution in the region in a sarcastic way, as it ends with the trial of “Bouazizi” who set fire to himself to express his refusal of injustice; under the pretext that he is “a culprit who triggered sedition because of what he did.”

Children also took a turn in the festival. They presented many works of handcrafts and music. Many poets also participated in the events, such as Khinaf Kano, Ibrahim Shamoon, Abdul-Samad Mahmoud, and Amaris Romanos.

Despite the relatively difficult humanitarian conditions, the festival retained popular appeal and received strong interaction. The organizers wish to run it in all of Syria during the next few years.