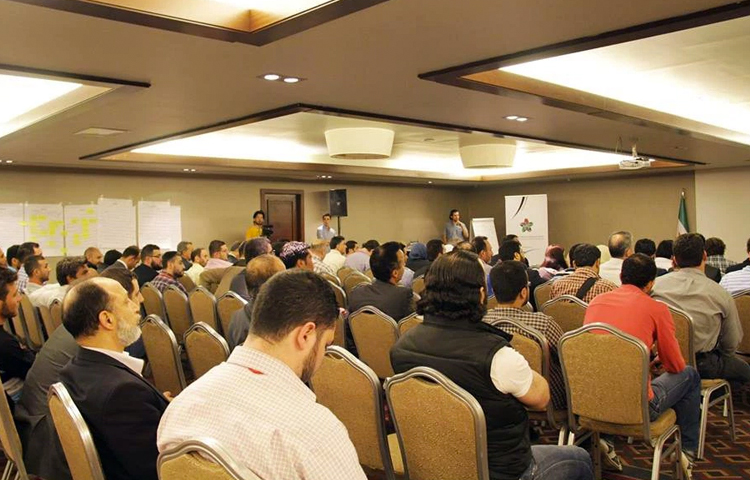 The National Coalition for Syrian revolutionary forces and opposition has organized a meeting that gathered the activists inside Syria and some figures of the coalition and the Syrian opposition in the Turkish city of Gaziantep. The meeting was held on 28-29th of April 2014.

The conference was aimed to bring the different views together and enhance the cooperation and coordination between the coalition and opposition’s activists. It was also meant to introduce the activists to the coalition systems in order to get them involved in making decisions concerned with Syrian affairs.

Enab Baladi has pursued the conference and reported the course of discussions as follows; on the first day, the activists were divided into four groups according to their field of activity be it medical, relief, media or educational; where each group was to discuss the difficulties and issues encountered with the coalition’s members, the assistance coordination unit and the interim government.

The activists have criticized the coalition’s members; especially those called “the opposition abroad” for not delivering any financial aids. Many activists have also objected to the high numbers of salaries the Coalition’s members and other opposition’s figures get. An activist from the city of Der Ezzor has stated that salaries of some coalition’s employees and assistance coordination unit’s members can resolve the educational problems of Der Ezzor for a period of 3 months. Whereas, the oppositionist “Hadi Al Bahra” responded that the highest salary in the coalition does not exceed $ 4,000.

A number of the activists have also objected to the conference’s venue; that is “the home forum” should have been held in a liberated Syrian territory rather than “disbursing funds on hotels”. On the other hand, one of the activists has praised the coalition’s and the opposition’s figures for accepting all the criticisms against them, and for promising to improve their performance. They also justified their limited efforts by the lack of support they receive and their desperate need to the international recognition.

The groups have also met the next day with the majority of the coalition’s and the government’s members; such as Ahmad Toma, Ahmad Ramadan, Hadi Al Bahra and Suhair al-Atassi, and discussed several issues, including “Geneva II”, international polarizations, civil and participatory political administration within the coalition.

The focus of the second day’s meetings was on the coalition’s policy regarding Foreign Affairs, the withdrawal of half of the members from the Conference “Geneva II” and the lack of readiness of the opposition delegation. The activists have requested to know the criteria and the standards upon which the selection of coalition’s members is based. In addition to that, numerous inquiries were raised about the remaining of Ahmed Al Jarba as the head of the Coalition.

On the other hand, the members of the coalition’s political body have responded to the majority of the activists’ questions. They also justified the coalition’s failure in resolving the problems and divisions amongst the rebels inside Syria, which affects the success of the opposition’s performance in general.

In a poll conducted by Enab Baladi to explore the activists’ opinions about the forum, a number of the activists have confirmed that the conference has brought the participants’ views closer and eased a bit of tension between the two sides. Yet, they are still awaiting the results they have been promised to see by the opposition’s figures.