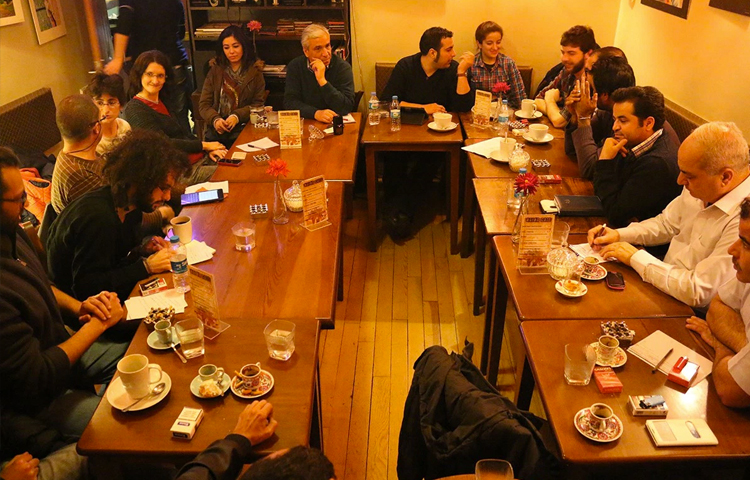 On Thurs. 27th of March, “Hamisch” [Margin] the Syrian cultural House in Istanbul organized a meeting and invited a number of intellectuals and journalists who live in Istanbul, in order to discuss ways of developing and activating the performance of the new cultural space, which was opened on the 17th earlier this month.

Mr. Yasin Haj Saleh, the founder and supervisor of the house, opened the meeting which took place in a small café on Istklal Avenue in Taksim area. Mr. Haj Saleh talked about the ideas and goals of this cultural house, and a small introduction about its founders, he also spoke about several projects that will start in May, 2014. The most notable are organizing a session about a book named Writing the Revolution authored by a group of Arabic writers; a photography exhibition showing photos from Damascus taken by the photographer Mohammed Al-Roumi, documentary film screenings; wood-carving exhibition and poetry readings; in addition to a concert performed by a Turkish band. According to Haj Saleh, the aim of these activities is to address both the Syrian community in Istanbul, and the Turkish community itself.

Enab Baladi’s reporter asked about the aim behind targeting Syrians in exile while the Syrian homeland is in a state of cultural and intellectual poverty; Haj Saleh answered: “Syria is dismembered now”, so it makes it difficult to convey the message from the inside; however, he did not exclude the possibility of sponsoring cultural activities inside Syria whenever possible stressing that the goal of “Hamisch” is to reach to the largest possible number of Syrians.

Yassin Sowihi – one of the founders – added that it is important to do a several cultural activities abroad, to allow people to express themselves and deliver their messages to the world, and those still inside must express themselves inside Syria, without waiting for any initiatives from Syrians who are abroad.

On the other hand, during the discussion, the Syrian writer and journalist Alwan Zuaytir talked about the lack of creativity in the Syrian Revolution’s literature throughout the past three years; he pointed out that the Syrians are quoting non-Syrian literatures such as collections of Ahmad Matar and Mahmoud Darweesh. Thus, Mr. Zuaytir highlighted the role “Hamisch” is expected to have in encompassing revolution’s cultural creativity, including new ideas, works of literature and art.

The Syrian activist Yamin Husien noted that the absence of independent civic and cultural organizations is what opened the door for “infamous” organizations and various political parties to exploit “literary creation” for serving its own ends. This exploitation cost the revolutionary literary work several losses and aggravated unemployment, and thus “Hamisch” and other independent cultural institutions shoulder serious responsibility for adopting and sponsoring these potentials.

During the meeting which lasted three hours, the guests suggested a variety of ideas about their expectations of “Hamisch” and their suggestions for developing the ideas of this organization and the ways to support or attempt to invest in it to serve the cultural, intellectual and artistic Syrian side.

Yasin Haj Saleh confirmed that the Syrian cultural house is an open club toward any ideas, contributions, experiences and youth participations in values and general orientations, and it seeks to benefit from their suggestions and experiences.

The Syrian cultural house “Hamisch” opened on the 17th of March with the collaboration of 8 Syrians and Europeans personalities: Yassin Haj Saleh (Syria), Yassin Sowihi (Syria) Omar Bayraqdar (Syria), Shanai Arzm (Turkey), Ozhan ander (Turkey), Alice Ergzn (Turkey), Lawrence Pardo (France). The house is located in Istanbul’s city center, Taksim Street, which is considered one of the most favourable areas for the Syrian intellectuals and activists in Istanbul.