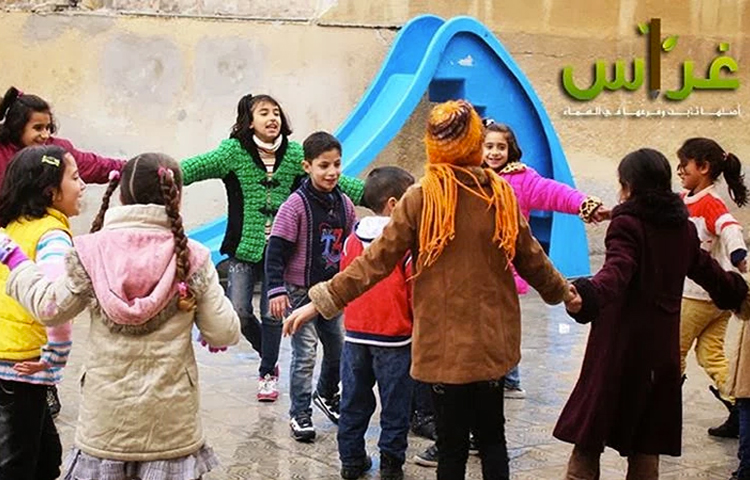 The idea of Ghiras was born with the beginning of 2013, when a lot of schools in different areas were shut down, which imposed a threat to the future of a whole generation of Syrian children. Therefore the civil community had to come up with some kind of alternative education, so the field schools came up to compensate a part of the education the children were missing due to the conflict, and allow them to exercise some kind of activity to ease down the psychological pressure imposed on them from the surrounding circumstances.

The goal of the Ghiras project is to create a socially and scientifically active generation, so it worked on providing education for children kindergarten until the sixth grade in the liberated areas, and training the educational staff, in addition to encouraging and supporting projects concerned with childhood and educational projects performed by the young people in those areas.

Between the months of May and September of 2013, the intensive curriculum of Ghiras was implemented for the first three grades, which was a brief version of the curriculum of the Syrian ministry of education, taught in a three month course.

Starting the academic year 2013-2014, the same timeline adopted by Assad government will be followed in areas where books were available; in addition we are connecting the Syrian National Coalition’s Higher Commission of Education Office to address the shortage in books in other areas.

The curriculum includes two recreational sessions a week. And currently the training and improving section is setting up a program to educate the teachers about psychological support techniques, and improve their educational skills.

Most of the schools of this project are being established with the help of the local councils, and in coordination with The Syrian Education Commission so that the final results, which are assessed on the base of a complete system of tests and exams, would be officially acknowledged.

A total of nine schools, with 1200 students and an educational staff of 62 people divided between teachers, administrators and employees were opened. Now, the project focuses on the liberated countryside of Idlib, and is working on targeting the forgotten refugee camps inside Syria which are far away from the Turkish borders. The project aims to reach and expand to the other camps and territories in their quest to provide knowledge to all Syrian children. The project focuses on the children in the first four years of school, the 5th and 6th grade to be added afterwards, and kindergarten to be opened next year.

For the safety of the children, the schools are being established in basements if available, or in buildings that are surrounded with higher buildings. Also, demolished schools are being reconstructed to make use of their ground floors.

As for the public reaction, initially the project was met with apathy, but now the idea is being welcomed by many. At the same time working in areas of confrontation means facing some security issues, because of the shelling that some areas are being subjected to, has an implication on the attendance of students and their performance due to what they’re facing with their families.

The project faces many problems, the most important is funding, which comes mostly from private donations because the operators of the project insist on the independence of the project of any political or ideological parties. Ghiras considers itself a part in any project involving education, and is ready to contribute in it.

The lack of essential services like water and electricity in the liberated areas is another obstacle, with the difficulty of getting teaching aids.

Ghiras is working side by side with civil societies working inside Syria, such as Qitaf Al-Kheir and Basmet Amal. They are also in contact with Hurras [Guards] network in order to educate the teachers about the methods of psychological support for children. As well as a coordinating plan with an Italian organisation (Libra Education) to facilitate cultural exchange between students in the program and Italian students from the same age group.