How do Syrian orphans make safe integration into society? 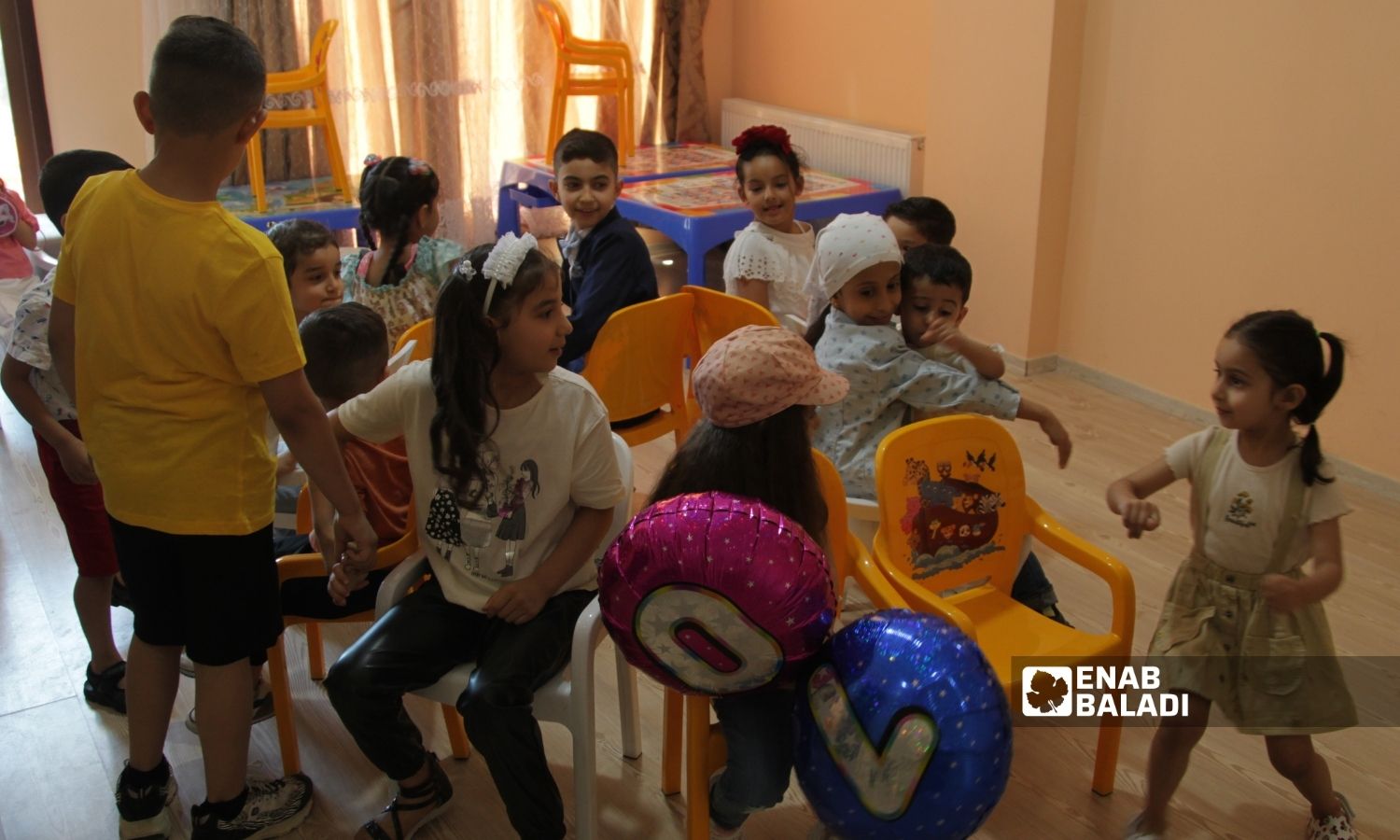 Children chant songs collectively amidst joyous rituals, the details of which appear on the faces of all those present in one building, some of whose apartments are used as classrooms, while others are used as homes for homeless families.

Children come together with fraternal affection, singing and cooperating to win over each other to the point that the differences and diversity of their environments cease to exist. That gives each stone of that building the value of a home to which children relate and in which they leave memories in every one of its corners.

Children show their association with that place that brings them together, while they are oblivious to the moment of future goodbyes.

In one room, children’s laughter rises during the mothers’ gathering with the first woman who lived in the home to teach them the art of crochet, a kind of giving back to the home and its people after she was able to leave it, according to what Fatima Jarad (55) had told Enab Baladi.

The mothers chat while sitting at a crowded table with their carefully woven pieces.

Although the scenario of leaving the home at a certain age or circumstance is considered repetitive, the mothers to whom Enab Baladi has spoken expressed their fear of losing the small community.

Over the past years, many Syrian orphanages have emerged in Turkey and northwestern Syria to protect orphans whose numbers have increased recently.

Despite the great need for such orphanages, children remaining in this environment can develop real problems in their personal lives, with implications for the entire community.

Enab Baladi met with children, mothers, and workers of orphan-care organizations and interviewed psychologists familiar with children’s lives in care homes. They all talked about negative effects that are clearly visible in the children’s personalities before and after they leave those homes.

The care home is a passage…

The volunteer in the al-Sham Association for Orphans Care and the person in charge of the al-Bukhari Home, Alia Kassab Bashi, told Enab Baladi the shelters are considered a passage for children and their mothers, explaining that male children leave homes at the age of 15, while the rest of the families leave when they are able to secure a decent life.

These procedures are not limited to the home where the volunteer works, as all Syrian and non-Syrian care homes set age limits for male residency, which Kassab Bashi deemed necessary in the presence of young girls and their mothers at the same homes.

Kassab Bashi explained that having young male adults in that environment can cause discomfort for the child himself and for women and girls within the homes. 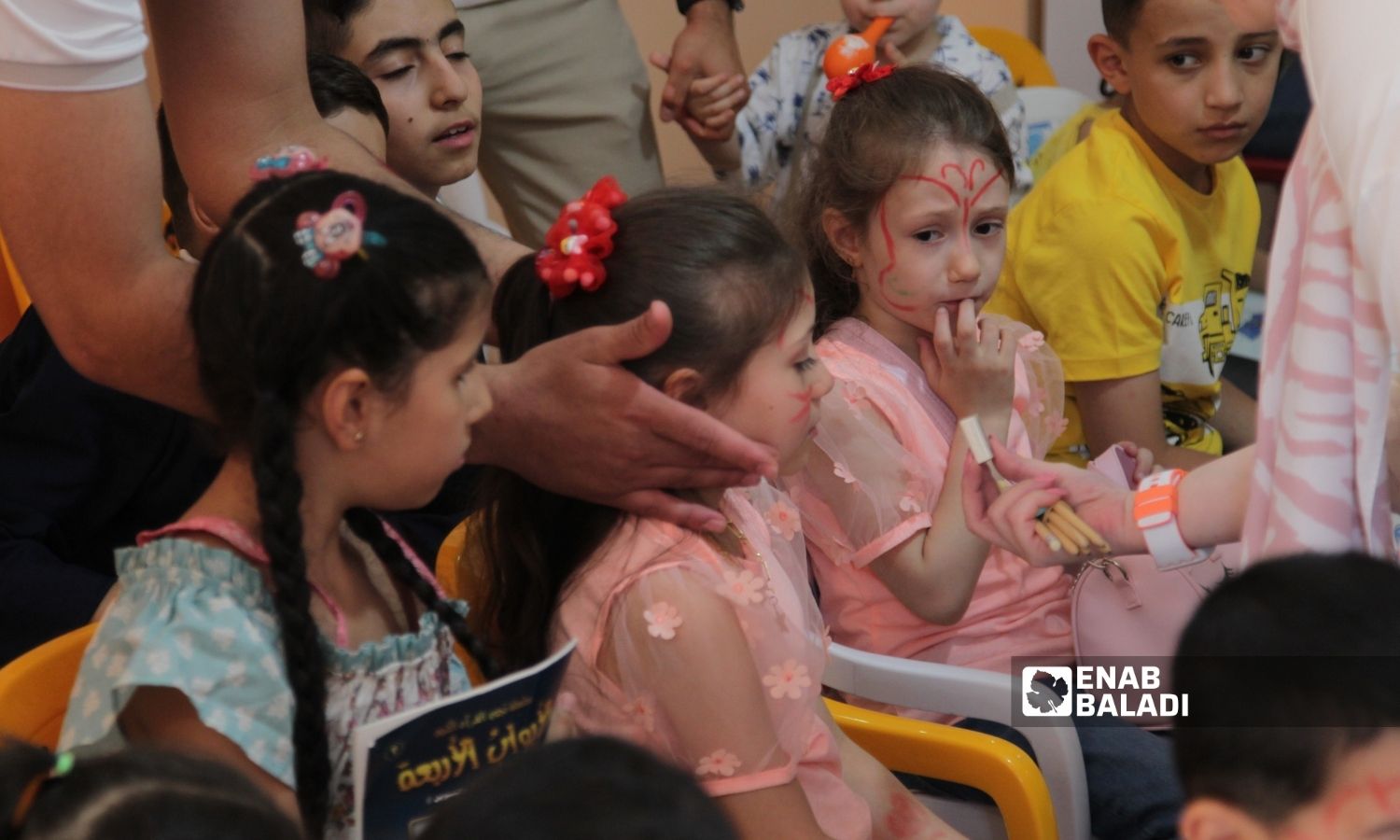 Education is the child’s and mother’s support

At a time when leaving the shelter to live within a larger community is an inevitable necessity, children need several basic services that would qualify them for that stage and would protect them from the dangers of walking without a map of the new world and without guides.

“Today, we learned the letter Thaal. Who can give me a word containing the letter Thaal?” The kindergarten teachers ask the children who raised their hands to ask permission to answer the question in lessons that lay the foundation stone of an educational journey.

In another class, the Arabic language teacher tells the story of a historical hero to students between the ages of 9 and 14 in an attempt to feed their minds with values that would benefit them in their future.

Education would support children and their mothers after leaving care homes, providing them with better opportunities, and giving them hope for a decent life that spares them the need for external support.

According to the lady in charge of the home, Alia Kassab Bashi, the home, as well as the association responsible for it, are placing education on top of the list of services provided to families residing in shelters.

The home offers education from the kindergarten stage until the children move to another stage to pursue their education in Turkish public schools or with grants from some private schools in case the child does not have a temporary protection card (Kimlik).

It also offers summer courses during which children spend their time within that building to engage in educational activities.

On the other side, mothers spend long hours of their day in group classes learning Arabic and the Quran, along with crochet, computers, and many other courses that can provide them with job opportunities in the future, as stated by Kassab Bashi.

After leaving the home, dozens of mothers were able to land jobs and depend on themselves, benefiting from educational courses during their stay there, added Kassab Bashi.

For her part, one of the mothers residing in the al-Bukhari Home, Rima al-Farran, was able to join the home’s teaching staff thanks to the teacher training courses offered by the home, as she said to Enab Baladi when she considered that this profession could secure a better future for her and her children.

Hassan Hussein, a pedagogical specialist and lecturer at the Faculty of Education at the University of Idlib, told Enab Baladi that “children’s scientific qualification, in addition to giving the educational aspect sufficient attention and providing them with special skills related to professional life, would enable them to navigate through life.”

In turn, the Public Relations Officer of Osra Orphan Sponsorship and Relief Association, Yahya Murad, emphasized that the provision of educational services for children was one of the most important services that could prepare a child to leave the home. This is what the Osra Association is keen on and is trying to strengthen within all organizations and bodies concerned with orphans. 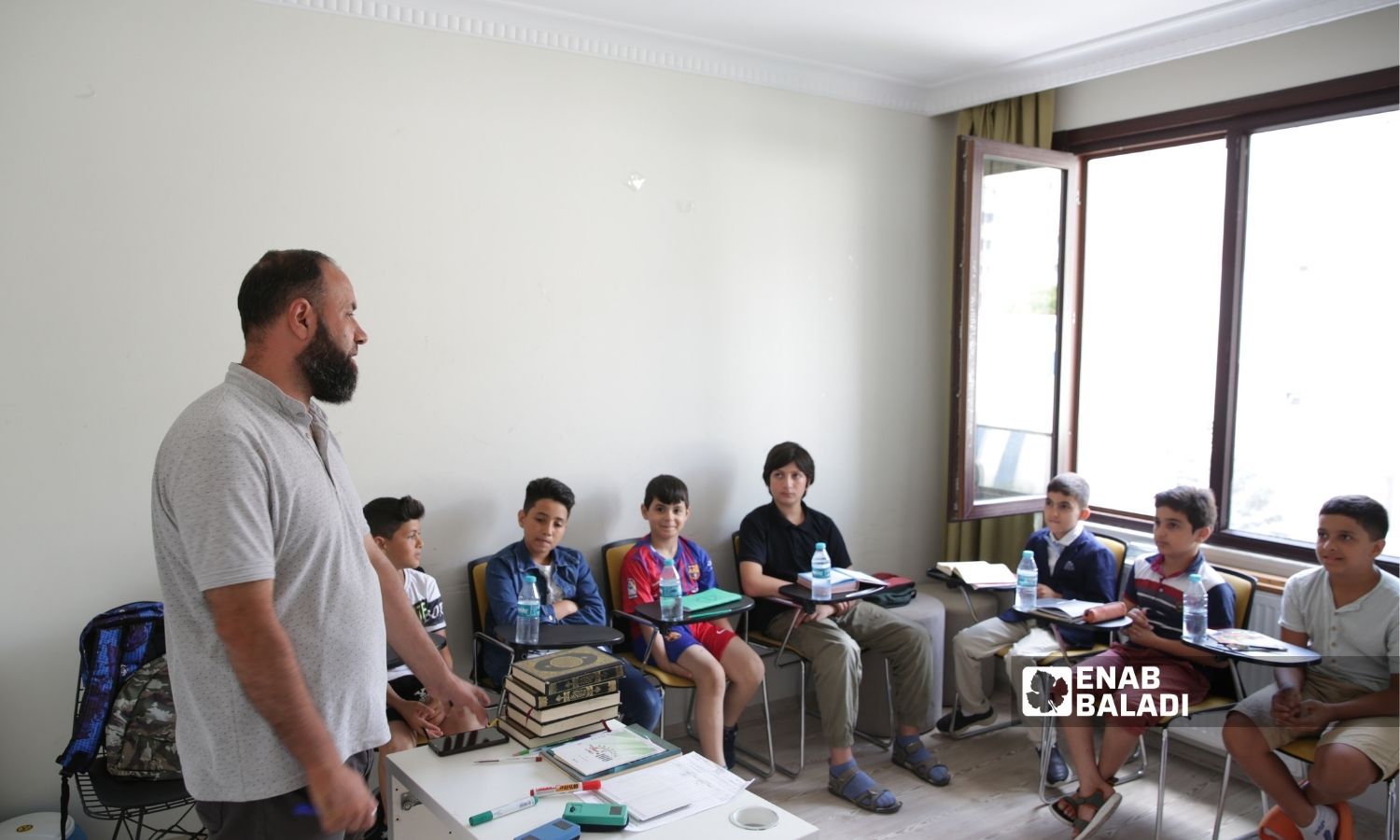 The a-Bukhari Home is overseen by a female administration, and lessons are given by female teachers, some of whom are mothers residing in the home. Meanwhile, men are absent from this care home and other similar ones, which causes male children to spend a long period of their lives without mixing with adults of their gender.

“My children were shy and had little participation in lessons. But today, after a male teacher came to the home, I felt that there was a void in their lives that was filled, and they became less shy”, said Rima al-Farran, a resident of the al-Bukhari Home.

The only male teacher in the al-Bukhari Home, Mohammad Naim Sinjab, believes that the lack of familiarizing children with people of their gender can, over time, have significant adverse effects on their personalities.

He added that he is trying to build a friendly relationship with students and is seeking to be someone to whom they look up.

In turn, the pedagogical specialist and lecturer at the Faculty of Education at the University of Idlib, Hassan Hussein, said that the lack of association between male orphans and their same-gender peers adversely affects the psychosocial, emotional, and behavioral aspects of their lives.

After years of being in a small environment within which most workers try to work for the children’s benefit, to help them and create family ties between them and their peers, the abrupt transfer of children to a completely different environment can have many negative repercussions on their lives.

Public Relations Officer of the Osra Orphan Sponsorship and Relief Association, Yahya Murad, said it was essential that a child does not feel like a pariah in the place where he/she grew up and lived.

A child must also be made aware of the reasons for their departure from the home, along with providing them with some kind of psychological support to help them become more self-reliant, according to Murad.

Preparing and rehabilitating children for their departure from the orphanage is done gradually:

– Gradual integration with the surrounding community and the enhancement of participation with others;

– Moral rehabilitation of the child and the development of communication skills and social competence;

– Psychological preparation for the next stage after home and teaching children that they must be able to rely on themselves;

– Training children in the skills of managing and regulating emotions and the ability to take responsibility;

– Placing children under special programs to ensure their safe departure from the home;

– Coordinating with the community and the formal and informal actors to support orphans.

What is the impact of a return to society without rehabilitation?

The return of children to society without prior rehabilitation creates an unstable environment for the child in the present, the impact of which can extend to their future.

Pedagogical specialist Hassan Hussein considered that the rehabilitation of children before their departure from the orphanage is a pivotal factor and a requirement for later development and upgrading in various aspects of life. The lack of rehabilitation by orphanage officials renders the child weak when leaving the orphanage, which hampers his/her ability to start a new life.

Hussein explained that qualifying for the next phase is one of Allah’s cosmic laws in creating man and the universe; it is a characteristic of growth to meet its requirements at every stage. Failure to meet these needs and requirements means that this child has moved to the later stage without complete development.

The Public Relations Officer of the Osra Orphan Sponsorship and Relief Association also stressed that the lack of pre-qualification for the orphan makes them inclined towards dropping out of school and renders them a prey for child labor at best and a life of homelessness and crime at worst, especially if they remain without a role model, assistance, or oversight.

Many organizations inside and outside Syria are active in the field of orphan care by establishing homes and villages to house them in northwestern Syria or providing monthly support estimated at 50 USD per month. The al-Sham Association for Orphans Care is the first to establish homes in Turkey.