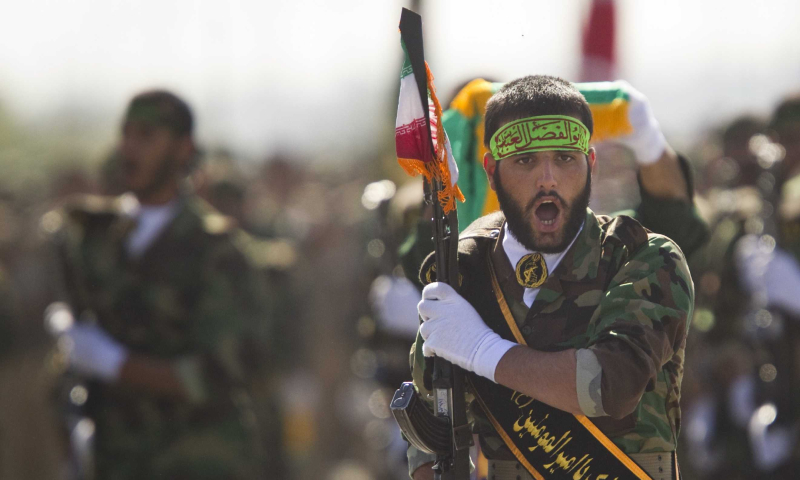 An Iranian militia member at a military parade (Reuters)

Iran is increasing its military and security influence at the airports of the eastern countryside of Aleppo, within the framework of attempts to impose an Iranian military reality in the region since the regime re-took control of large areas of the governorate at the end of 2016.

The Iranian militia bases established in the countryside of Aleppo are considered among the most important military bases in Syria. They operate under the supervision of senior officers of Iran’s Islamic Revolutionary Guard Corps (IRGC) and Quds Force. These bases also include groups from the elites of the Lebanese Hezbollah, Iraq’s Harakat al-Nujaba, and Iran’s Quds Force. They are also equipped with the most important weapons and reconnaissance aircraft.

Iran established new military bases, in Aleppo especially after a large part of its forces withdrew from southern Syria towards the north, based on international understandings.

Iran holds sway in the air of northern Aleppo countryside

Iran is consolidating its military presence in Aleppo, mainly in the vicinity of Aleppo International Airport and al-Nayrab Military Airport, east of Aleppo. Tehran is currently working on establishing new military sites at military and civilian airports in the eastern countryside of Aleppo.

Enab Baladi’s correspondent in Aleppo said that militias backed by Tehran are strengthening their military presence at the Kuweires Airport, east of Aleppo, where Tehran creates military bases and supports them with Syrian and Lebanese fighters.

On the 24th of last September, these militias began carrying out maintenance on the runways of Kuweires Airport, provided that the work would continue for about a month and a half.

In coordination with the Russian military police, the Iranian militias are also rebuilding some runways that were almost wholly destroyed in previous years due to the bombing of the airport.

Matching sources told Enab Baladi that the coordination between the Russians and the Iranians is mainly focused in Aleppo and its countryside on transferring weapons from Damascus International Airport to Iranian sites.

Accompanied by Syrian elements, Iranian experts are supervising a military base in the town of Tell Hasel, east of Aleppo. There is also another military base run by only Russian officers, but the Syrian regime forces are not allowed to enter it.

A wall diving Kuweires: where is Moscow?

Commenting on the Russian-Iranian military understandings and their combined presence at the Kuweires, A Syrian National Army (SNA) officer said that Moscow and Tehran reached no consensus on their existence and deployment at the Kuweires Airport. Instead, a separation wall dividing the airport was established to define the sphere of influence between Russians and Iranians.

The officer said that, based on intelligence information, the western section of the airport is called “al-Maslakh.” It is a prison run by the Iraqi al-Nujaba militia, and the Lebanese Hezbollah, and Fatemiyoun Brigade, a militia recruited by IRGC.

Tiger Forces, led by pro-Russian commander Suheil al-Hasan, are stationed in the eastern section of the airport, which has its separate gate.

In the eastern section of the airport, there are Tochka missile depots run by pro-Russian groups, according to the SNA officer.

The regime forces maintained their control over the Kuweires Military Airport in the eastern countryside of Aleppo in 2015, with the support of the Russian Air Force, despite the siege imposed by the Islamic State (IS) group.

Weapons and tunnels in al-Nayrab

The fighter added that the number of the Iranian military sites in the airport vicinity has now amounted to four. In addition, a missile base is under construction in the village of Rasm al-Abed, east of Aleppo.

Iranian officers and experts oversee these military sites. The fighter said that they are present intermittently to avoid Israeli raids as training operations in these camps occur once every two months.

The SNA officer said the Iranian militias almost completely take control of al-Nayrab Military Airport. These militias are stationed in what is known inside the airport as “FM buildings.” Groups affiliated with Iran are distributed in “Research Center 99.”

The Russians only use the airport runways and conduct cargo operations, the officer said.

On 1 March 2020, Turkish President Recep Tayyip Erdoğan announced that the Turkish forces entirely destroyed the Syrian regime-run al-Nayrab Military Airport in Aleppo, making it out of service, so that the Syrian regime could no longer use it.

Al-Nayrab Military Airport, located on the outskirts of Aleppo city near Aleppo International Airport, was known as one of the airbases that the Syrian regime frequently used in the attacks against civilians in the neighborhoods of Idlib and its countryside, northwestern Syria.

The airport is considered a center for receiving pro-regime militias from Iraq, Afghanistan, and Lebanon. Many militia commanders made several visits to the airport. For example, Head of the Iraqi al-Nujabaa movement Akram Al Kaabi visited his forces deployed in Aleppo in 2016.

On 5 November 2020, the American Atlantic Council Center for International Studies published a report by the Syrian expert in military and field affairs, Nawar Shaaban, in which he discussed the Iranian military presence and influence in Syria.

The report talked about the Iranian presence in Syria; Iran has started to build up a military force in Syria following different approaches since the beginning of the protests in Syria in 2011. First, Iran worked directly with foreign and local militias affiliated with the Syrian regime.

“The second approach was created from the core of the first one. Its main objective was to integrate local Iranian militias into Bashar al-Assad’s military and its security branches to give them a legal standing in Syria and an umbrella of protection from possible Israeli or US airstrikes,” according to the report.

According to the report, Iran began creating the Local Defense Forces (LDF) in 2012 and supporting specific brigades within the Syrian regime’s forces. Iran also established local private security companies to cover the LDF’s presence and mitigate the risk of being exposed to Israeli airstrikes.