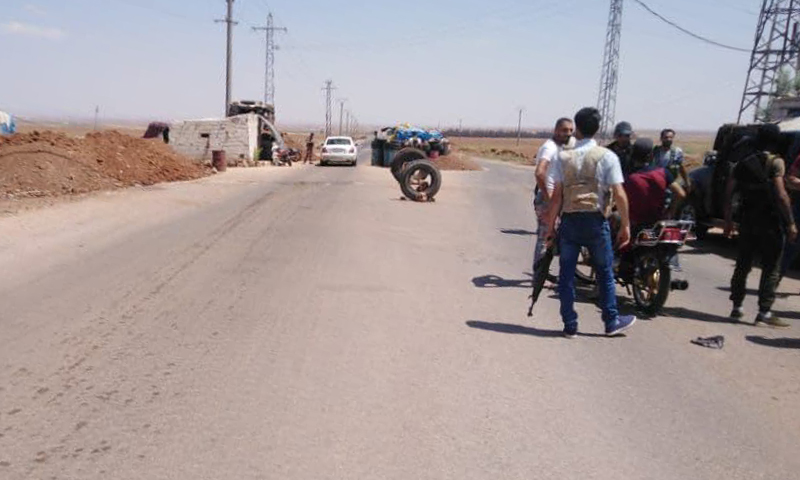 Anti-regime local fighters in control of one of the Syrian regime forces’ checkpoints in al-Sahwa town, east of Daraa — 29 July 2021 (Local sources)

Daraa al-Balad city has been a site to some rapid military changes today, on 29 July. Syrian regime forces, backed by tanks and armored vehicles, launched a military attack on the city’s neighborhoods from two fronts east of the city; the military post at al-Qubba farmlands and the al-Qassad security checkpoint.

The escalation of violence against the city was preceded by large-scale shelling and preparatory attacks. Regime forces hit Daraa al-Balad, Daraa Camp, and Tariq al-Sad with mortar rounds and Elephant missiles. The attacks killed at least two persons and inflected various injuries on many others, local Nabaa News Agency reported.

At the time of writing, anti-regime local fighters were attempting to combat regime forces’ attacks. Russian forces, deployed in Daraa province, stood at the battle’s sidelines.

The Horan Free League reported that the local fighters caused deaths and injuries among the regime forces.

Enab Baladi’s correspondent in Daraa today reported that forces of the regime-affiliated 4th Division took control of the al-Shayah and al-Qubba farms, east of Daraa al-Balad, subjecting the city to a full siege.

Regime forces used surface-to-surface (SSM) Elephant missiles, hitting the area with over 10 such missiles. Notably, this is the first time regime forces use similar weaponry since the 2018-settlement was signed in Daraa, under Russian auspices.

Enab Baladi’s correspondent said that the regime force’s ongoing shelling with mortar rounds caused deaths and injuries among civilians. The locals, for their part, appealed for concerned parties to provide the area with necessary first-aid supplies, particularly after the city’s sole healthcare clinic was forced to close its facilities as it was repeatedly targeted by sniper fire of regime forces-affiliated local militias, stationed in the al-Minshiya neighborhood.

Military analyst and Brigadier General, Ibrahim al-Jibawi, told Enab Baladi that the regime has probably breached Daraa agreements unilaterally. He attributed his analysis to two reasons; the first is the fact that Russia, the guarantor of the Daraa “settlement” has not yet taken any measures in response to current clashes.

The second reason, al-Jibawi said, is that Russia is still attempting to hold conferences on refugees’ return. Participation in the fighting in Daraa would put Moscow in a weak position and undermine refugee-related efforts.

However, al-Jibawi said that it is unlikely that the regime has started military action in Daraa without Russia’s permission. He added that the regime can never take any military measures without a green light from Russia, noting that Iran has been having a strong presence in these battles through that the 4th Division’s extensive participation, which is directly backed by Iran.

Neither Russian, nor Syrian, air forces have so far partaken in the attacks in Daraa. This facilitated the path for anti-regime local fighters to widely spread and impose their control over the area. This situation raises several questions, particularly whether Russia will remain inactive, enabling the fighters to recapture the areas they controlled before 2018.

Related to this question, al-Jibawi said that Russia would not allow local fighters to predominate the area, adding that should the course of the battles remain in favor of the fighters, Russia will definitely intervene.

Daraa province has been struggling with instability and rampant insecurity since regime forces retook it from the opposition’s armed groups in July 2018.

Early today, regime forces attempted to storm Daraa al-Balad advancing from three fronts and ultimately imposed a full siege on the city. The invasion into the city was aborted by local fighters, while regime forces continued to bombard the city’s outskirts with Elephant missiles, tanks, and mortar rounds.

Several regime forces’ checkpoints gradually fell into the grip of the city’s local fighters because the majority of these checkpoints are operated by former opposition fighters who signed the “settlement” agreement between Russia and the province’s dignitaries in 2018.

Clashes extended to the Kuhail town, adjacent to Sida town. Local fighters took over the checkpoints in Kuhail and confiscated light and medium weapons.

The city of al-Hirak, east of Daraa, also witnessed such checkpoint seizures. The city’s local fighters controlled the military security checkpoint there too.

Local fighters have also controlled the entirety of the towns of al-Ghariya al-Sharqiya and al-Ghariyah al-Gharbiya.