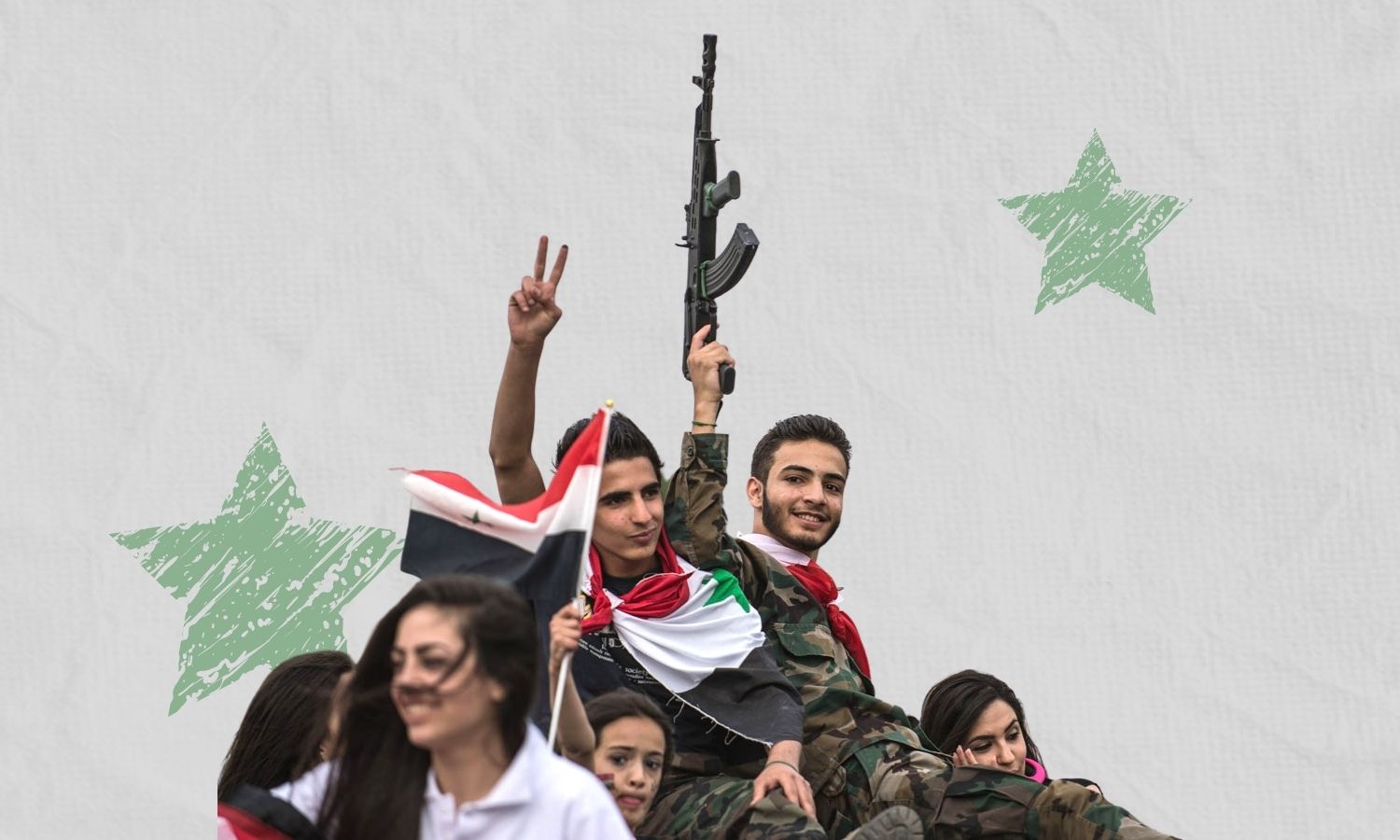 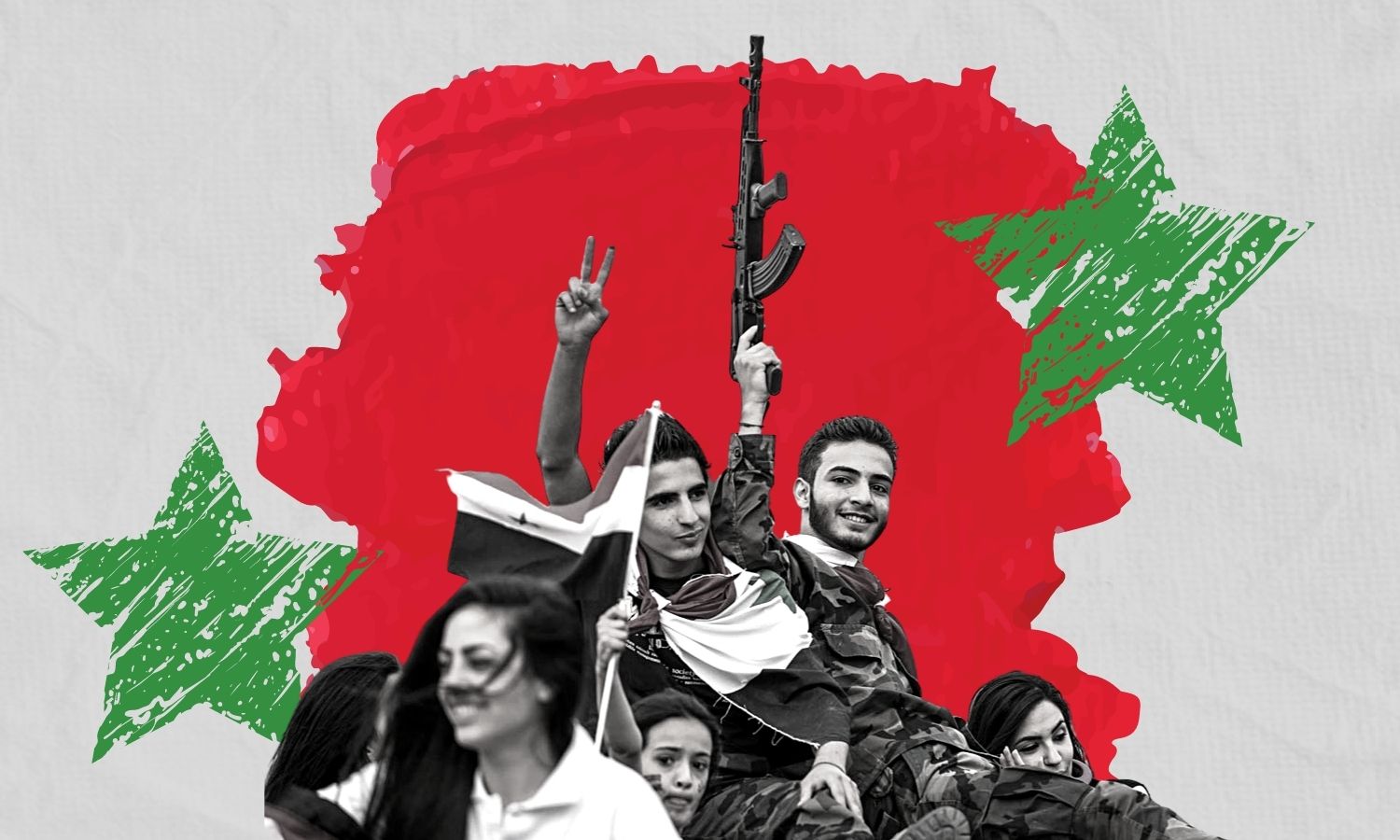 Portraits and banners promoting presidential election campaigns for three candidates have flooded the streets of the Syrian capital Damascus and other cities and towns controlled by the Syrian regime. These election optics carry slogans such as “National Electoral Celebration” and “Presidential Entitlement,” in reference to a sham presidential race whose winner is already known to Syrians.

Today, regime-controlled territories are witnessing a theatrical election display, which will come to an end on 26 May after closing ballot boxes.

On 19 April, the Syrian People’s Council announced the beginning of the presidential candidacy registration process, to receive many applications in the following ten days. On 3 May, the Syrian Supreme Constitutional Court accepted three applications out of 51 for candidacy for presidential elections, including the incumbent president of the regime Bashar al-Assad, Abdullah Salloum Abdullah, and Mahmoud Ahmad Marie.

While Syrians at home and abroad realize that these elections are fraudulent, foreign people and communities, Arab and western, do not seem to grasp the bigger picture.

The Syrian regime has been working on promoting the elections’ integrity and role in deciding the next president for Syria through several means, primarily its state media’s frenzy endorsing the “democracy” of the electoral process and invitation for fraternal countries to monitor the elections, mainly al-Assad’s close allies, Russia and Iran.

It is worth mentioning that the official media’s interest in covering the elections was only to shed light on Bashar al-Assad’s re-election campaign and its supporting rallies while it chose to ignore the other two candidates. Al-Assad’s 2021 “Hope is in Work” campaign has created its own social media accounts, while the two runners’ (Marie and Abdullah) campaigns were limited to road posters.

In this report, Enab Baladi discusses the world’s apparent misconception of the Syrian presidential elections process (excluding Syrians abroad) and the factors contributing to acknowledging this bogus process. Enab Baladi spoke to experts who talked about the reasons behind the world’s inadequate information about how presidential campaigns are run in Syria, the impact of state propaganda on western audiences, and what means may help to expose the elections’ hidden offstage manipulative practices.

Former Syrian diplomat and non-resident researcher at Omran Center for Strategic Studies Dani Baaj told Enab Baladi that one of the main reasons behind foreign societies’ lack of knowledge of the Syrian issue in its current circumstances is the fact that political events and conflicts attract much bigger appeal in their beginnings than in later stages.

The passage of time eventually causes these events to lose appeal on the part of foreign observers, either for the emergence of more significant events or due to the length of conflicts, as in the case of the Syrian crisis, which completed its tenth year last March.

The arrival of Syrian refugees to asylum countries has alerted the western world to what was going on in Syria, especially after the large-scale first asylum waves.

However, the overwhelming reality of Syrian asylum seekers in refugee-hosting countries has shifted focus from the events inside Syria to the refugees themselves, according to Baaj.

Elaf Yassin, a member of the Syrian Constitutional Committee’s (SCC) small body, emanating from the civil society list, told Enab Baladi that Arab societies are not entirely alienated from what is happening in Syria, as a large segment of Arabs in neighboring countries and the Gulf States knows the situation on the ground and the injustice against Syrian people.

Yassin added that the interest given to the Syrian issue varies depending on the level of political interest some western people show compared to others without forgetting that these people’s countries have their own internal issues to focus on.

Baaj said part of western societies do not fully understand the situation in Syria and lack adequate information about the Syrian presidential elections or how they are run because western people have taken different positions towards the Syrian crisis.

He added that the Syrian revolution narrative reached western communities incomplete thanks to the downturns the Syrian opposition experienced during Syria’s armed conflict. The emergence of the Islamic State (IS) and other extremist Islamic groups have negatively affected the revolution. Far-right-wing anti-Islam parties have stood against the Syrian revolution after the rise of militant groups, which they viewed as a nucleus of an Islamic nation; this, in turn, damaged the revolution’s narrative.

With this wrong narrative in mind, some political parties, even Arab ones, started to think that Bashar al-Assad is the best of the worst to rule Syria, and a political mindset like this is difficult to change, Baaj said.

The regime’s government has been promoting the presidential election’s legitimacy and success, which proved successful among certain groups, particularly those who did not take a clear stand on the Syrian crisis.

According to Baaj, the regime’s propaganda is only successful because of the opposition’s bad political performance in representing the Syrian people.

He added that the opposition Syrian National Coalition (SNC) in its current structure and way of administrating Syria’s general political file had failed and weakened the Syrian revolution’s actual narrative. The SNC members were caught in figuring out who would substitute al-Assad and forgot that the core idea behind opposing the regime was to replace the entire Syrian regime’s political structure, which the SNC failed to achieve.

The Syrian Constitutional Committee (SCC), formed under United Nations (UN) auspices to achieve a political transition in Syria under UN Security Council Resolution 2254, failed to lead successful negotiations to serve the Syrian file after reaching a deadlock; however, Nasr al-Hariri, the head of the SNC presented the SCC as a “triumph for Syrian people.”

Baaj held the Syrian regime as clearly and primarily responsible for obstructing negotiations and hampering political understanding. He said that the regime was not serious about negotiating or reaching a political transition solution. “Still, the intransigence and poor negotiation performance by the opposition gave the regime some winning points, mainly in the SCC negotiation talks.”

The same modest negotiation performance by the opposition contributed to prolonging the Syrian conflict for ten years and decreasing world popular interest in the Syria conflict.

In addition, the opposition forces did not possess an active revolutionary media performance to address the western mainstream with a democratic political experience capable of supporting the Syrian revolution’s rhetoric.

Today, the task of promoting the Syrian revolution to foreign countries has to be shouldered by Syrian dissidents and the active anti-Assad civil society and not opposition-led political entities, according to Baaj.

He pointed out that the Syrian opposition mainstream lacks a clear vision for the future of the Syrian case. However, one can detect some bright sides to the Syrian opposition moves in western countries, like activating accountability cases against the Syrian regime, highlighting its crimes, and translating the presidential election-related news to more than one language to reach the international community.

For her part, Yassin indicated that Syrian civil society organizations have partnerships supported by UN agencies or the European Union (EU) that know exactly what is going on in Syria.

According to Yassin, it is “a bit of a stretch” to ask or demand Syrian civil society organizations to address the western or European opinion, for “it is not their area of work.” Such a task should be performed by the media, which plays a significant role in raising communities awareness about humanitarian and fair cases, like the Syrian or the Palestinian issue. “Unfortunately, the media’s role in promoting revolutionary cases is a whole other issue because it is restricted by certain agendas.”

Syrian civil society organizations are doing whatever they can within their capacity, activity, and competence, Yassin said. They communicate with the EU or the United States government and any other influential actor in the Syrian file to deliver their position on the elections and violations committed during the process.

According to Yassin, addressing the western opinion is not so much the responsibility of Syrian civil society organizations as of ensuring the voice of Syrians to be heard, which in her opinion, is already being done by the organizations.

She added that the popular opinion of each foreign country is contributing positively to helping out Syrians, which in turn would lead to additional pressure on key countries that will eventually yield or go along with the popular opinion.

Making the western opinion more aware of what is happening in Syria is ultimately in the interests of the Syrian people, but Syrians should also reorganize themselves and work collectively to ensure support and advocacy to the Syrian case and the sympathy of ordinary individuals, celebrities, and western politicians, who can exert pressure and push towards ending the Assad’s regime.

Baaj said that it is in the interest of the Syrian regime and its allies to initiate discussions on the elections’ surrounding conditions and entitlement reforms, whereas the elections should be an opportunity for anti-regime Syrians to make moves besides accusing the ballots of illegitimacy.

For Baaj, the best way to address the upcoming presidential elections by the Syrian street abroad is not by focusing on the elections themselves but on the atrocities committed by the regime through sharing them on different social media platforms and linking them with posts related to the election process. By doing so, anyone searching for the Syrian presidential elections or simply the word “elections” would see a bunch of posts, tweets, and articles talking about the Syrian regime’s crimes. This social media campaign is a successful move that would show the world the truth of what is happening in Syria.

On 21 April, the UN announced that it is not involved in Syria’s presidential elections, stressing the importance of reaching a political solution under UN Security Council Resolution 2254.

Stephane Dujarric, the spokesman for UN Secretary-General Antonio Guterres, said in a press conference that “Syria’s presidential elections have been called under the auspices of the current constitution, and they are not part of the political process established under Resolution 2254. The UN is not involved in the upcoming Syrian elections and has no mandate to be.”

Early this year, the US and the EU declared their rejection of Syria’s presidential elections and pledged accountability against the regime.