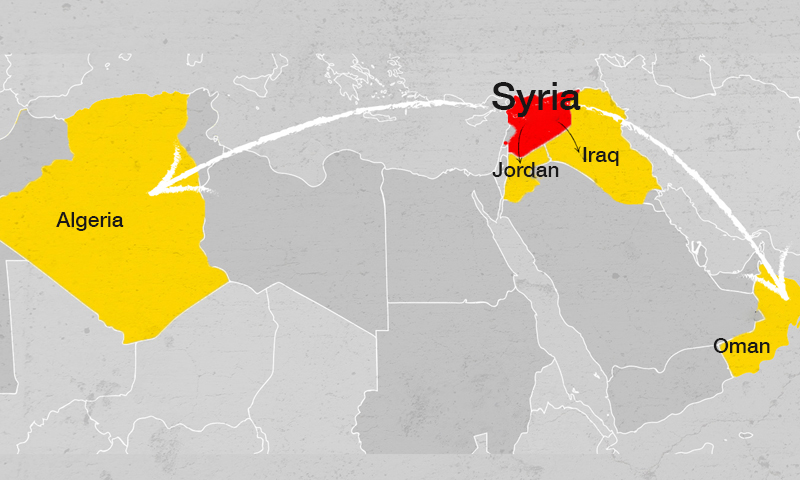 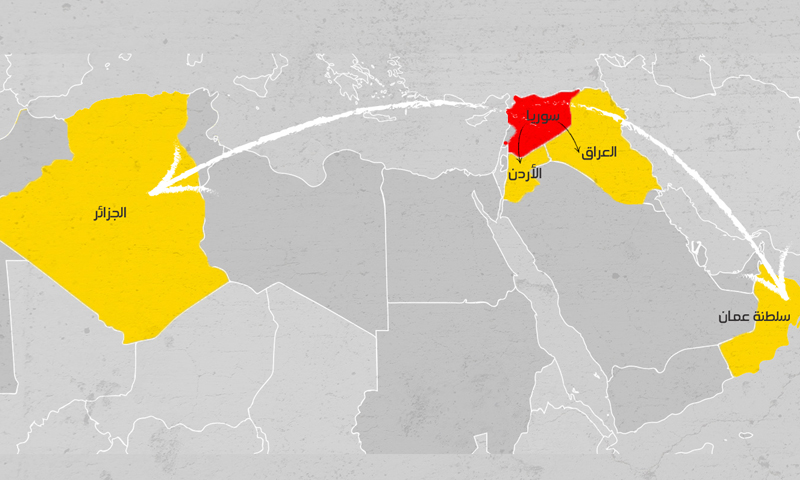 In the past few months, the Syrian government has been focused on establishing economic cooperation with Arab countries, given that some countries’ governments, such as the Sultanate of Oman and Iraq, still support the Syrian regime, which is hammered by the economic decline and the ever deteriorating value of the Syrian Pound (SYP).

The Syrian government is searching for ways out of its economic, commercial, and financial crisis, with Arab countries enduring similar economic conditions.

The SYP currency fell to new lows, trading above 5,000 to the US dollar on the black market, amid an official failure to control the currency depreciation.

In a letter addressed on behalf of the Syrian industrialists in all the governorates, the Federation of Syrian Chambers of Industry asked the Syrian regime to facilitate Iraqi merchants’ entry into Syria at the Iraqi Chambers of Commerce request.

Despite being the second-largest oil producer in the Opec – the Organization of the Petroleum Exporting Countries, Iraq suffers a severe financial crisis due to the decline in oil revenues caused by the drop in crude oil prices, along with the decrease in other tax revenues due to the outbreak of the coronavirus (COVID-19).

On 7 March, the pro-government newspaper al-Watan said that international trade fairs in both China and Turkey were called off due to the coronavirus scare. Therefore, Iraqis have intended to buy Syrian products instead of Chinese and Turkish ones, which created a “golden” opportunity to kick-start stagnant markets into growth, improve the national currency’s value, and save foreign currencies in Syria.

The industrialists hoped in their letter to “allow Iraqi merchants, duly registered in the Federation of Iraqi Chambers of Commerce, to enter Syria without prior entry visas, as was the case before the war, provided that they submit to the procedures followed in combating the coronavirus.”

On 19 March, the meetings of the tenth session of the Iraqi-Syrian Joint Ministerial Committee, which lasted for two days, were concluded in the Iraqi capital, Baghdad, with the signing of eight memoranda of understanding in different areas, including reconstruction, housing, and tourism, the National Iraqi News Agency (NINA) reported.

Iraqi Minister of Trade Alaa Ahmed al-Jubouri said that holding the tenth session of the committee’s meetings aimed to strengthen economic and trade relations between the two countries. Several common issues were discussed during the meetings in various fields to enhance economic, commercial, and investment cooperation, according to NINA.

The minister said that there are various cooperation fields between Iraq and Syria, including projects, international and specialized exhibitions, and investment opportunities. He also stressed the significance of joint work for building mutual economic interests in an integrated manner, developing the trade balance.

On 25 February, the Minister of Industry in the Syrian government, Ziad Subhi Sabbagh, in his meeting with the Head of the Regional Bureau of the Arab Federation for Leather Industries in Jordan Nassir Diyabat, discussed opening a tradeline between Syria and Iraq and supporting industrialists in shipping goods. This will lead to lowering the prices of goods for industrialists, traders, and consumers, facilitating the acquisition of annual visas, accelerating the procedures at the airport, solving problems of bank transfers, and dealing with hard currencies.

According to al-Watan, the Syrian Minister emphasized that “Syria’s doors are always open for the Arab brothers to cooperate and achieve common interests,” noting that exhibitions and conferences are “a step to break the stalemate and siege to reach the desired economic cooperation.”

Jordan is facing economic hardship due to the coronavirus pandemic, which primarily affected the “most vulnerable” groups. It also forced businesses to close. People lost their jobs and remained without a source of income, despite the government’s swift measures to prevent the spread of the virus.

Jordan depends on Western financial aid to overcome its economic crisis, which was exacerbated by the outbreak of the pandemic.

The US administration proposed to allocate 1.3 billion USD of aid to Jordan as part of its draft budget, within the framework of the strategic partnership between the two countries, according to a five-year memorandum of understanding.

Despite Algeria’s trade deficit increases and existing economic crisis, the Algerian authorities have expressed their readiness to activate their economic relations with the Syrian regime after the Syrian embassy requested the Algerian ministers of trade and labor to meet with them in early February.

Algeria’s trade balance deficit–a trade deficit that occurs when a nation imports more than it exports– reached 10.6 billion USD in 2020. Also, Algeria suffered from an economic crisis in 2020 due to the COVID-19 infection and the collapse of oil prices in world markets, since fuel revenues of Algeria represent 93 percent of its foreign exchange earnings.

The ambassador of the Syrian regime in Algeria, Namir Waheeb al-Ghanem, said that contact has been made with the concerned authorities to reactivate, reform, and restructure the Joint Syrian-Algerian Businessmen Council. This came in response to Algeria’s previous request to reinstate the council, considering that the private sector is necessary to restore commercial contact under the Western sanctions imposed on the regime.

Political and economic support by the Sultanate of Oman

Political relations between the Sultanate of Oman and the Syrian regime did not see a rupture like with many other Arab countries after 2011. Oman maintained its ties with Syria and never closed its embassy.

The Syrian regime’s officials meet with Omani officials “to strengthen their countries’ political and economic relations and to discuss means of cooperation,” according to official media outlets close to the Syrian regime.

On 21 January, the Minister of Finance in the Syrian government, Kinan Yaghi, met with the Ambassador of the Sultanate of Oman in Damascus, Ambassador Turki bin Mahmood al-Busaidy to discuss the possibility of enhancing cooperation between the two countries.

The Ministry of Finance said, in a statement published on Facebook, that Yaghi met with the ambassador of the Sultanate of Oman and talked about the Sultanate’s “firm and solidarity position” with the Syrian regime and “fraternal relations between the two brotherly countries.”

Cooperation that will bring no change

Economic cooperation between the Syrian regime and the Arab countries that have not severed their relations will not change the current economic situation, according to economic analyst Manaf Quman.

“The economic situation in Syria now will not be improved by limited cooperation with Jordan, Algeria, or Oman. In fact, the issue is not only about trade.”

Quman said that Syria is encountering an “almost intractable” situation. Almost all production sectors are paralyzed, causing a significant decrease in production and an increase in poverty and unemployment rates. Simultaneously, there is a general rise in prices and a decline in the value of the currency, in addition to all the possible penalties, geographic separation, corruption, and more.

Quman believes that the regime seeks such cooperation as a kind of propaganda, moving stagnant waters, and coming out with victories in front of its supporters.

In a commentary to the possibility of imposing sanctions on countries cooperating with the Syrian regime, Quman said that any individual, company, or government dealing with the regime today would be fraught with dangers due to the sanctions imposed under the Ceasar Act. This may expose any country to a breach of the sanctions, which would be detrimental to the country itself at all levels.

The analyst notes that dealing with the regime in food, agricultural, and consumer products is not covered by any penalties. Yet, dealing in this framework remains of little weight in the trade balance, sporadic, and does not meet the need.

The analyst believes that any country that approaches the regime would be probably seeking to win reconstruction contracts and reserve a seat in the next stage if the regime stays in control in the future.

For the Syrian regime, such cooperation only passes through the media portal, promoting it among its advocates and encouraging other countries to break the stalemate and return to Syria.