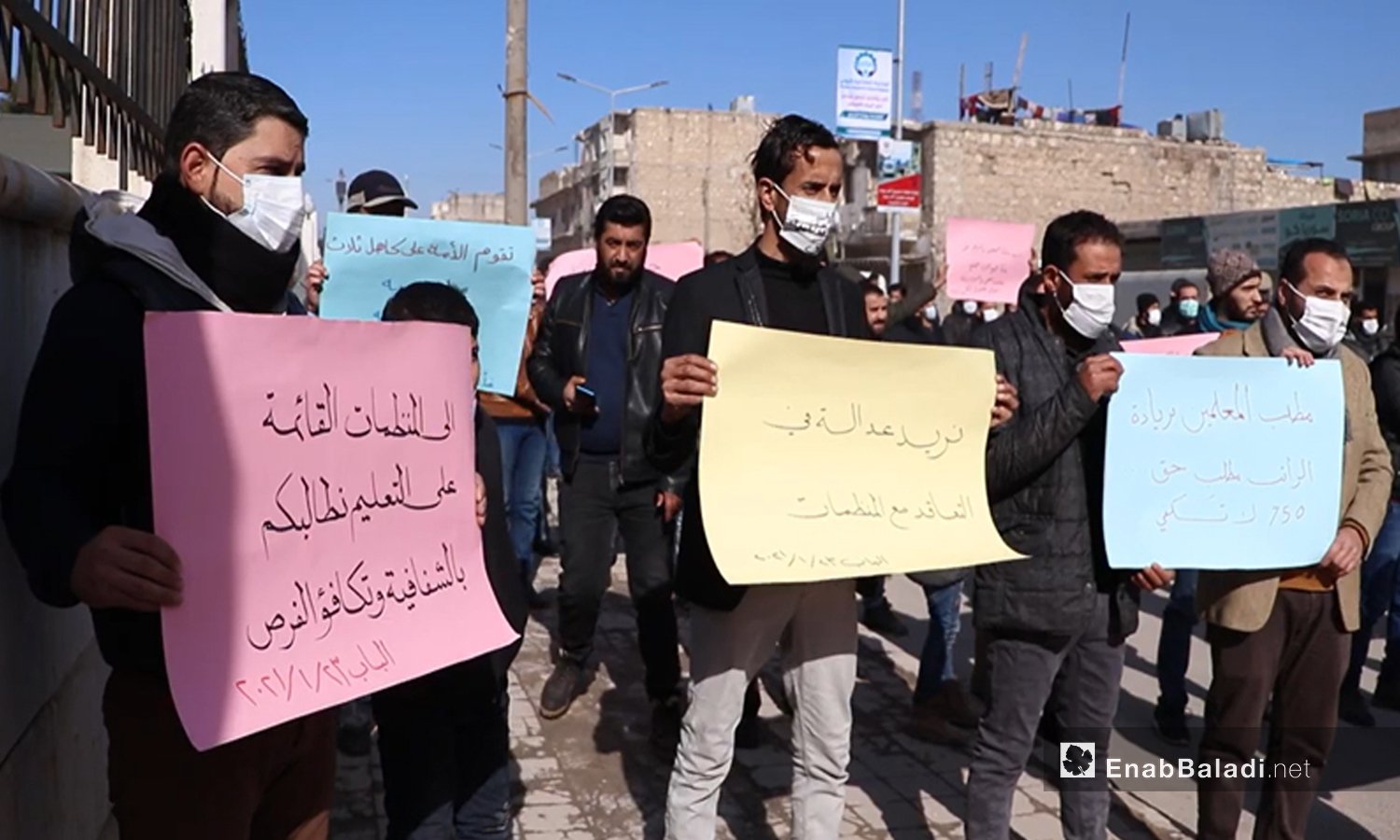 Teachers stand in a protest, demanding an increase in their salaries in the city of al-Bab - 23 January 2021 (Enab Baladi / Asim Melhem) 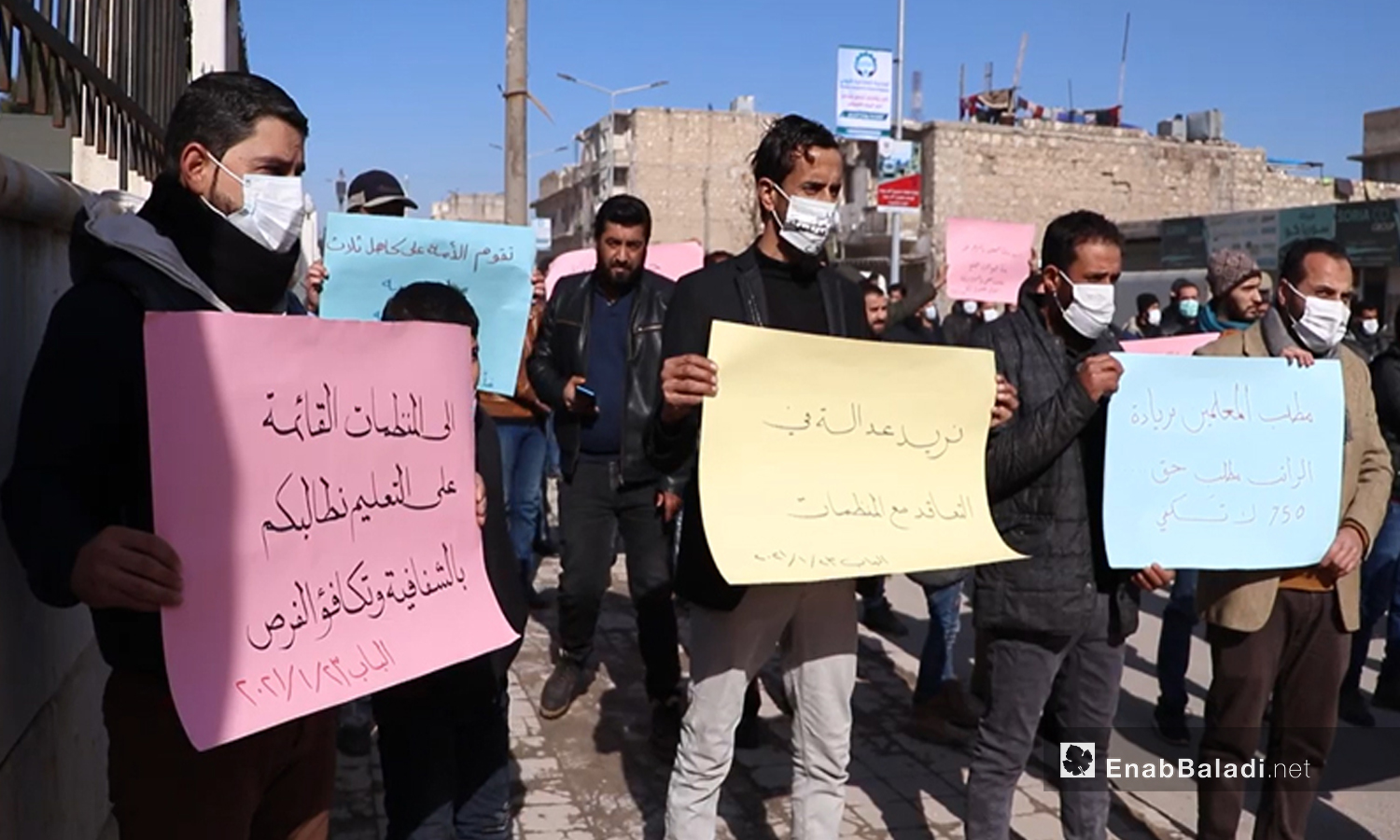 “I believe that teaching is a sacred profession and that a teacher has a crucial role in the development of every student’s life. But, if I, the teacher, did not devote sufficient time and efforts to my students, I would not achieve the desired aim. This is because, in the city of al-Bab, I am forced to look for an additional job to meet my family’s needs for the rest of the month,” Ahmad al-Saleh told Enab Baladi.

Ahmad al-Saleh, an underpaid primary school teacher in his thirties, strives hard while hunting for an extra job in the city of al-Bab in the northern countryside of Aleppo. Al-Saleh told Enab Baladi that he has to find another job to provide for his family in addition to teaching.

The teachers of al-Bab complain about the loss of their rights and low salaries.

Teachers in al-Bab are underpaid despite the deteriorating living conditions and the skyrocketing food prices. In response, the local authorities and officials ignored all the teachers’ complaints.

The teacher in the Operation Euphrates Shield and Olive Branch regions under the Turkish administration typically earns around 750 Turkish Liras (TL-104.9 USD) per month.

Al-Saleh, displaced from Deir Ezzor, is one of these teachers. He struggles to fit all his expenditures into an insufficient salary, which he has to spend on various necessities, including electricity and water bills.

With the very little money he is paid for teaching, al-Saleh reaches the middle of the month penniless. This has forced him to search for an extra job, as a monthly support stream of income.

This is also the case for Ibrahim Qadirani, the Arabic language teacher, except that Qadirani is not searching for additional work besides teaching. He stressed that not having an extra job does not mean that he is satisfied with his low pay, “which can hardly cover the basic necessities of life in such dire living conditions.”

Since 2017, al-Bab teachers have organized several strikes and protests in front of the police station in the city. They demanded that Turkish and local officials improve their conditions and increase their salaries.

The last protest was held on 23 January. The protesting teachers requested greater attention and higher salaries, which take account of the worsening economic situation. In fact, the number of protesters has dropped significantly for fear of harassment in the workplace.

Ibrahim Qadirani said that the cost of living in the region is the same as in Turkey. So, people should be paid the same salary rates in both Turkey and al-Bab.

Teachers asked to be paid just like the Syrian teachers working in Turkey, who receive a salary of 2,020 TL (282.6 USD) a month.

A teacher, who spoke on condition of anonymity for fear of being dismissed from work, told Enab Baladi, that “few teachers, barely ten” responded to the invitations to join in the teacher’s protest rally. Teachers were afraid that “they might be dismissed or transferred to other schools, like what happened to some teachers.”

The education directorate stood against the protesting teachers. The demands of teachers fell on deaf ears–except for the protest that took place in 2018.

According to the teacher, some teachers and principals were subject to dismissals, threats of dismissals, and harassment.

Lack of teachers union and a rights representative

Establishing a teachers union that demands and guarantees teachers’ rights has been a recurrent requirement of the area’s teachers.

After the factions of the Turkish-backed Syrian National Army (SNA) took control of al-Bab, the first teachers union was formed under the auspices of the education directorate, which interfered with its decisions and views, according to a teacher from the city, who preferred not to be named for fear of possible punishment, told Enab Baladi.

The teacher added that in 2018, al-Bab’s education directorate took “arbitrary” decisions against some teachers who then demanded an increase in their salaries and improvement of the directorate’s organizational conditions. Following the decisions, many teachers asked to form a new union.

The union was formed. However, the education directorate and former local council rejected its formation. Four school principals were dismissed for being members of the union. The principals got back to work after numerous requests.

Because the other members of the teachers union were receiving threats, the work of the union has been suspended since then, according to the teacher.

Enab Baladi obtained from the local council a permit to get statements from al-Bab’s education directorate about the teachers’ salaries and the teachers union. However, the director of education refused to talk about the matter and considered the issue of the union and the salaries outside its authority.