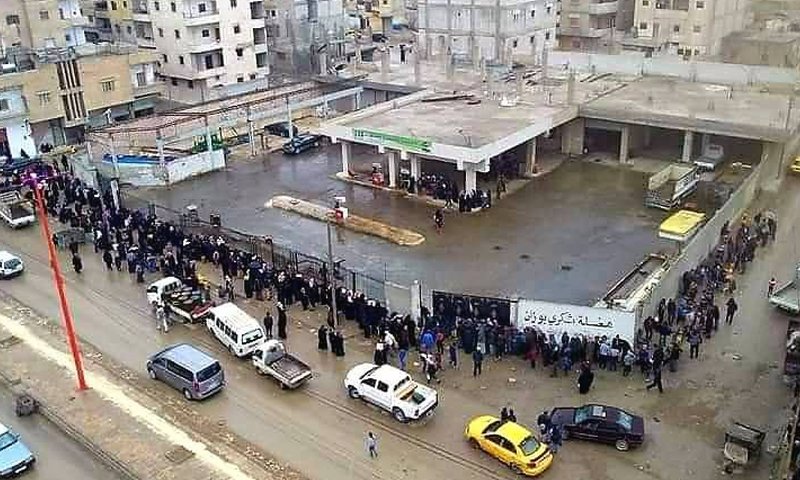 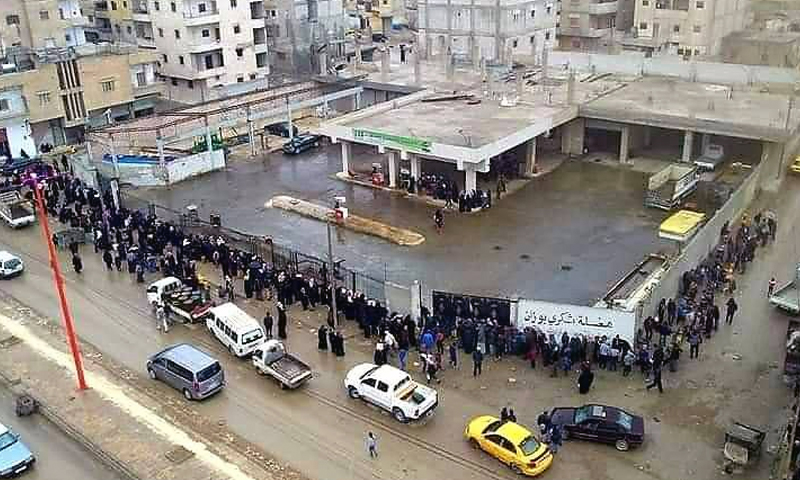 Residents of the Syrian regime-held governorates have become accustomed to scenes of long queues at fuel stations. Yet, the long lines in the governorate of Raqqa, which is under the control of the Autonomous Administrations of North and East Syria (NES), seem out of the ordinary.

Residents of Raqqa spoke to Enab Baladi about their fear that they may soon also experience long lines like those in areas under regime control, especially with the lack of necessary materials, the most important of which is fuel. Despite repeated promises, the NES fails to provide its residents with their basic necessities.

Raqqa’s economic crisis led to high oil prices on the black market due to the lack of subsidized fuel allocations in the fuel stations.

Walid, a taxi driver, told Enab Baladi that filling up his car with fuel is considered “one of his greatest daily concerns.”

Walid said that he encounters “difficulty” while filling up his vehicle with subsidized fuel because of overcrowding and long waits—sometimes people spend three hours waiting for their turns at the fuel stations. Therefore, some taxi drivers resort to buying black market fuel in order to save time and effort.

As for diesel, one-liter costs between 500-600 SYP (0.18 USD) on the black market, while the price of subsidized fuel is 75-125 SYP per liter. The prices vary according to the type of diesel provided.

An employee in Raqqa’s General Fuel Administration (GFA), who spoke on the condition of anonymity, told Enab Baladi that the fuel tank trucks coming to Raqqa are “insufficient” because there are numerous people who have been displaced from the areas that Turkey controlled during Operation Peace Spring. This caused an increase in the demand for fuel.

The GFA employee did not see signs of a solution to the fuel crisis in the NES-held areas despite the presence of many oil wells in the region. He attributed the fuel crisis to economic and political pressures faced by the NES, most prominently the continuous decline in the value of the SYP.

The SYP has passed 3,000 against USD since the beginning of the year. Besides, the US controls some of the oil wells in the region.

Export continues as locals are deprived of fuel

Uday al-Ali, a 35-year-old resident of Raqqa, feels upset when seeing fuel tank trucks heading daily from Raqqa towards the Syrian regime-linked areas. He expressed his dismay, saying that “Priority should be given to our area; in other words, the needs of the people of the area should be met first, then the surplus products should be exported to others. So, those fuel tanks have to be exported after addressing the needs of northern and eastern Syria,” al-Ali told Enab Baladi.

The GFA employee interviewed by Enab Baladi said that exporting oil products to regime-held areas is a part of a barter mechanism that the Syrian Democratic Forces (SDF) uses in its dealings with the Syrian regime. The SDF has many needs to barter for, such as vegetables, fruit, electrical appliances, cement, and iron. Their material and intangible value is equal to the value of the exported oil products. Besides, the NES collects lucrative customs revenues from those imported materials entering their areas of control.

However, the fuel crisis has had a negative impact on industrial facilities and factories in the city of Raqqa and its countryside, which, at reporting time, were still deprived of their subsidized share of diesel provided by Raqqa’s GFA to establishments licensed by the Raqqa Civil Council-affiliated economic committee.

In a 16 January interview with Bisan, a local radio station, the head of the Chamber of Industry and Craftsmen in Raqqa Abdullah Rasho appealed for the necessity of “saving factories and industrial facilities from closure” due to the lack of diesel at the subsidized price.

Rasho confirmed that the 200 factories and industrial establishments licensed by the Chamber of Industry and Craftsmen have not received their subsidized fuel allocations for months, despite repeated promises made by the GFA to solve the problem. The GFA argued that distributing fuel subsidies to the population is their first priority, followed by factories.

The GFA released a decision on 12 December 2020 to increase the number of fuel tank trucks to Raqqa from 24 to 34 every two days; each tank contains around 30 thousand liters. Nonetheless, that was not sufficient to end the fuel crisis in the city and its countryside. Unfortunately, not all the people of Raqqa have received their share of the subsidized heating fuel yet.