Monopoly or competition between fuel companies in rebel-held Idlib? 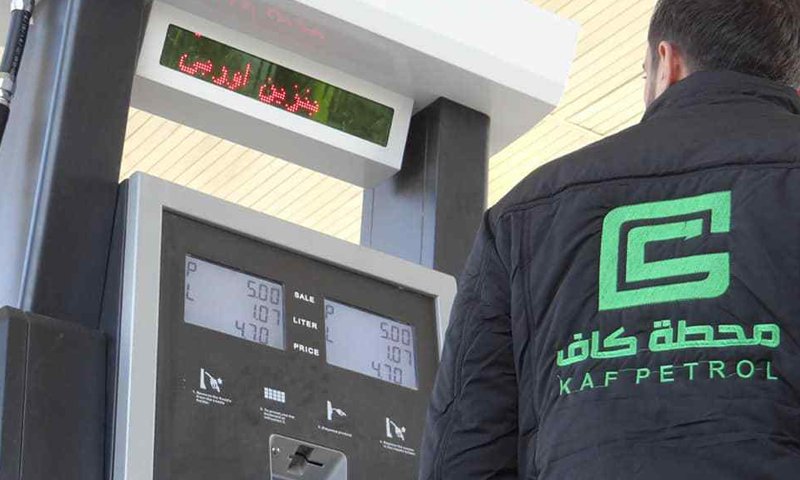 An attendant at the Kaf Fuel station in the town of Sarmada, north of Idlib- 27 December 2020 (Kaf fuel company’s official Facebook page) 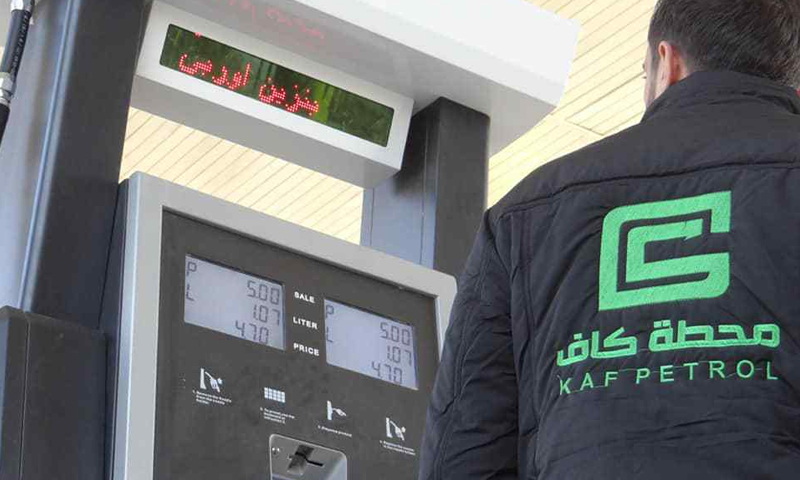 Private companies control the fuel market share in the rebel-held province of Idlib, north-western Syria. This has sparked many questions about the factors affecting the price of fuel products, including whether the multiplicity of these companies contributes to competitiveness for the benefit of the population.

Watad Petroleum has suspended its weekly price bulletins on its social networking sites since 20 December 2020. Four days later, the Shahba petroleum company did the same. However, the Kaf fuel company continued to update its fuel products’ prices on its official website.

Watad used to issue weekly oil price bulletins. The oil products fluctuated significantly due to the US dollar’s high exchange rate against the Turkish Lira (TL), which replaced the Syrian pound (SYP) in the opposition-held areas in June 2020.

Due to the continued decline of the SYP value, the local authorities in north-western Syria replaced the SYP with the TL to thwart economic collapse in their areas of influence. They also aimed to regulate the prices of basic food and products. However, this did not happen because of Turkey’s plummeting lira against foreign currencies. The traders and suppliers argued that the currency used for imports is the US dollar.

Petroleum companies began to emerge in Idlib with the establishment of Watad Petroleum in January 2018.

Hay’at Tahrir al-Sham (HTS), which has the most substantial influence in Idlib, is accused of being behind Watad and the companies that were founded later. However, the HTS and oil companies officially deny this.

The establishment of Watad negatively affected the people who used to work in the oil sector. The sector was a source of income for many independent oil workers and trades.

This is because Watad obtained a license from the Salvation Government (SG) and became the exclusive importer of oil and gas from Turkey into the areas controlled by the SG, including Idlib, part of the western countryside of Aleppo, and the northeastern countryside of Latakia.

Economic researcher at the Omran Center for Strategic Studies Muhammad al-Abdullah told Enab Baladi that “in the absence of an accredited governmental body to manage the fuel file in Idlib, Watad has become the only party to control the oil sector. It claims that its establishment was aimed at organizing this sector and ensuring the continued supply of fuel to these areas.”

A second company was established and joined the fuel market in 2019 under the name Kaf Energy Company. Then, the Shahba petroleum company was founded in December 2020.

The three companies obtained a license from the SG. They also pay taxes to it, based on the licensing contracts concluded between the two parties, said the public relations official at the SG’s ministry of economy and resources, Muhammad Daaboul, in a previous interview with Enab Baladi.

Is competition serious between the three companies?

Researcher Muhammad al-Abdullah explained that the environment in which the three companies operate is not conducive to competition. This is reflected in the current fuel prices, which are “high compared to the fuel prices in the liberated areas adjacent to the HTS-controlled areas.”

Watad has an almost complete monopoly over fuel products, imposing prices that exceed the real cost of importing them. Watad does not allow any fuel shipments to pass from neighboring areas, except with its consent and under specific conditions, due to their comparatively lower prices, according to Muhammad al-Abdullah.

However, the public relations official at the SG’s Ministry of Economy and Resources, Muhammad Daaboul, said that the prices of the oil products are set “according to a specific mechanism that achieves consumer protection, product quality, and the continued availability of oil products for economic activities.”

The SG-registered oil companies are required to stock up on sufficient oil products for the essential activities and services of hospitals, bakeries, water, and electricity stations in case the fuel supply is interrupted.

These companies should apply a pricing mechanism for their business that publishes regular prices in the case of a change in the exchange rate or an increase or decrease in the fuel price from the source, according to Daboul.

Researcher Muhammad al-Abdullah believes that establishing the Shahba and Kaf companies and allowing them to invest in the fuel sector “can be seen as a step through which the HTS aims to reduce popular pressure on the Watad. The move also attempts to increase fuel imports and increase revenues in the HTS-controlled areas.” It is not to create an atmosphere of competition between these companies, as has been claimed.

According to the rebel-held areas’ current economic reality, “it is unlikely that the HTS will discard the economic gains achieved from investing in this vital material.”

-The three oil companies have the same leading supplier. The Shahba and Kaf companies did not seek to make contracts with new suppliers to lower the petroleum products’ price to the consumer or obtain better quality fuel that conforms with international fuel standards. Besides, there is a slight difference in the prices of fuels sold to consumers by the three companies.

– The three fuel companies all lack transparency in their fuel pricing strategies. In addition, these companies manipulate the prices of fuel products; for example, if global oil prices drop, they tend to delay reducing their products’ prices. But, they rush to raise prices in case fuel prices spike in the worldwide market.

Many locals believe that the Shahba and Kaf companies are subordinates to Watad. Although these oil companies operate under different names, they replicate Watad’s strategies.

Al-Abdullah ruled out the possibility of establishing new fuel companies in the future, independent to practice their commercial and investment activities, including producing and selling this material of all kinds.

All opposition areas, including Idlib and Aleppo, import oil from Turkey through only one company, and the fuel shipments journey begin from Turkish ports in Mersin, southern Turkey.

The fuel tank trucks arrive at the Bab al-Hawa border crossing between the Syrian opposition-held areas and Tukey. Then, these tank trucks unload their cargo and transfer them to Watad’s trucks. Thus, Watad distributes fuel to the fuel stations across the governorate of Idlib.

By contacting many different sources, including owners of fuel stations and traders, Enab Baladi reached the company’s name (the primary fuel supplier), which is MT. But it did not find any detailed information about it or any physical presence on the Turkish territories.

The companies have a different opinion: competition exists, but for pennies

The Kaf’s public relations office told Enab Baladi that there is competition among the three companies, which obtained licenses from the SG’s ministry of economy to operate. They compete in different ways, such as competing to offer good quality imported oil or Syrian filtered oil and responding quickly to the market’s needs, which is experiencing a fuel crisis, particularly in Idlib.

In addition, there is price competition, according to the plan of each company and its ability to compete. The Kaf-linked fuel stations tend to sell fuel at lower prices than other companies’ fuel stations and work to reduce fuel prices by concluding contracts with companies supplying fuel to northern Syria at preferential prices.

The director of the Shahba company, Ammar Taqal, told Enab Baladi that Shahba acquired nearly a third of the market share at the other companies’ expense. It is distinguished by its location, which links the western countryside of Aleppo and the northern countryside of Idlib, making it easier for the rest of the stations and gas centers to reach them at low cost.

Taqal justified the small difference in the companies’ prices by explaining that Turkey did not authorize oil imports transiting from other countries. That is why the three companies have the same supplier. He added that the profit margin is so little; it is basically pennies.

The director of the media office at Watad, Safwan al-Ahmad, said that there is limited competition, noting that the new companies have a competitive impact because many fuel stations have gone to them for reduced prices.

As Enab Baladi observes, there is a slight variation in the prices of fuel products sold by the three fuel companies, which is estimated at 2 TL (984 SYP)for a liter of diesel and gasoline and 1.5 TL (738 USD) for a gas cylinder. 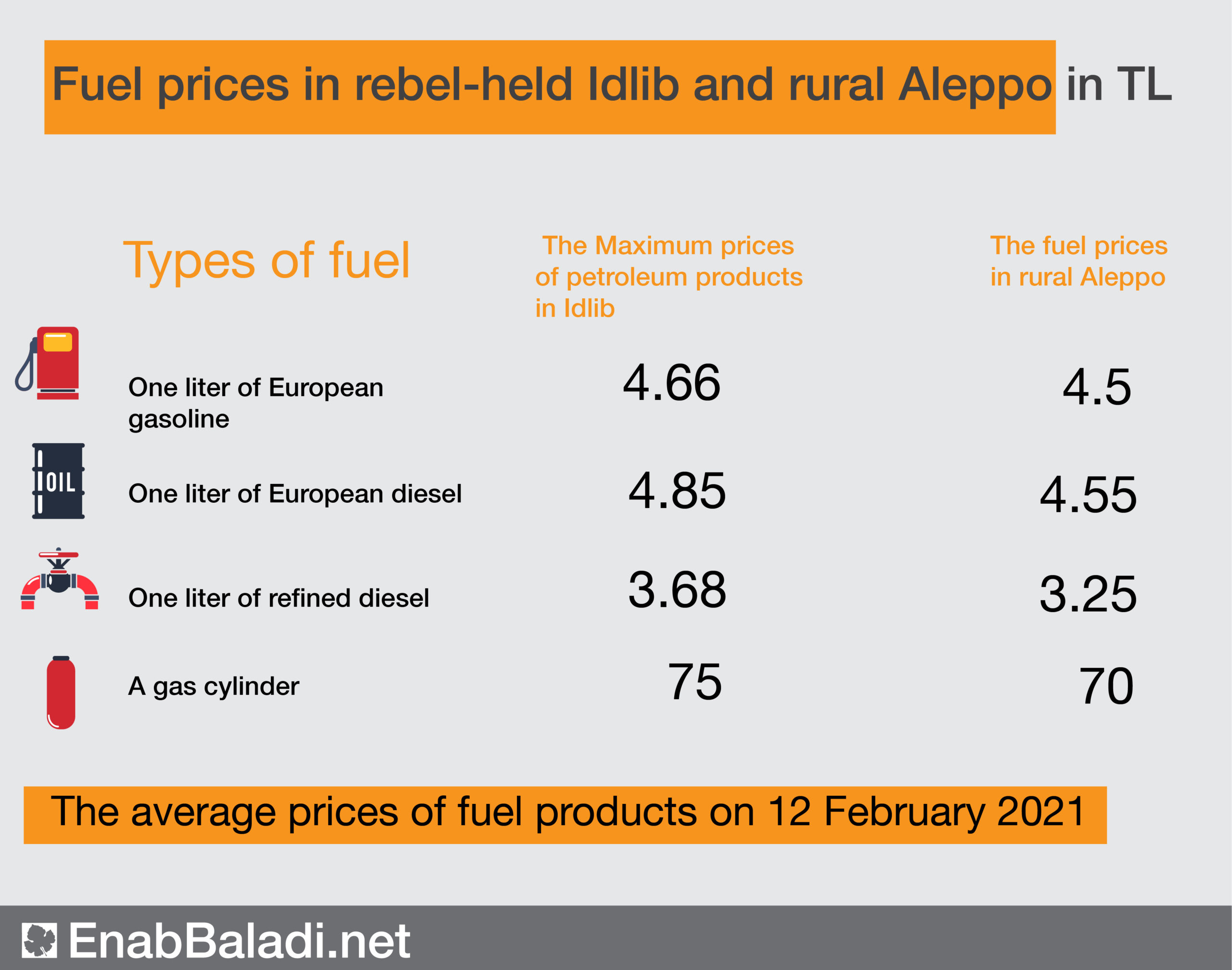 Kaf Energy Company has only one fuel station, which is in the town of Sarmada, north of Idlib. However, all the stations approved by the company are considered sales outlets, which are located in Kili, Hazano, Maarat Misrin, Armanaz, and Ariha, according to the Kaf’s public relations office.

By contrast, the Shahba company does not have its own stations. Still, private stations are contracting with the company headquarters on the road between al-Atarib and al-Dana (al-Tawama junction), according to its director, Ammar Taqal.

Watad has the largest market share. It is run by Nasser al-Shwa and has four branches: refineries, fuel markets, gas sales centers, and a branch for importing European fuels.

Kaf and Shahba companies did not disclose the identity of their owners. Kaf denied to Enab Baladi that it is a joint-stock company, saying it is not owned by several shareholders.

“Fuel prices are spiking. Although the value of the TL drops and increases, the fuel prices remain the same, despite replacing the SYP with TL,” said Manna Gharibi, a resident from Idlib.

He also indicated that the fuel prices do not consider how low citizens’ incomes are currently. Besides, job opportunities are few, and the citizens depend on food aid baskets provided each month by relief organizations.

Due to the high fuel prices in Idlib and the low per capita income, people are adopting alternative means of heating in the winter, such as secondhand clothes, olive pomace fuel (extracted from olive remnants presses), and firewood.

Moreover, people try to reduce car use and fuel consumption by purchasing their daily needs on foot, according to Manna Gharibi.

Watad’s monopolistic practices created a state of popular frustration because they did not take into account the difficult living conditions of the locals created by these high prices, according to researcher Muhammad al-Abdullah.

Ninety percent of Syrians live below the poverty line, according to the representative of the World Health Organization (WHO) in Syria, Akjemal Magtymova.