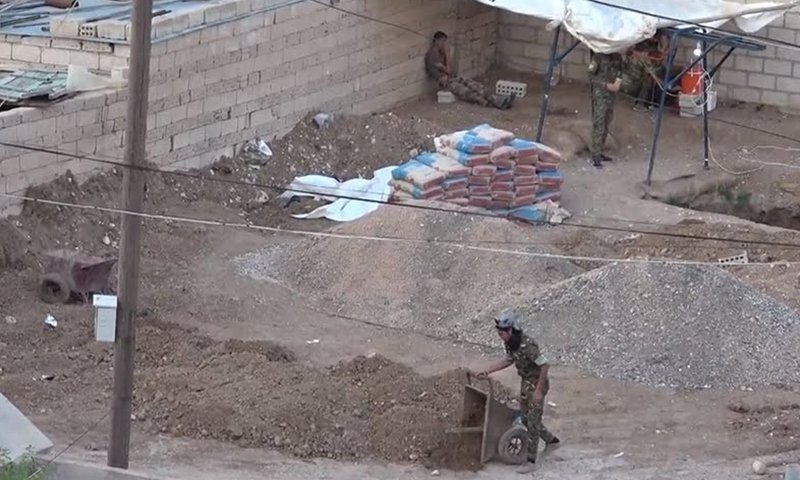 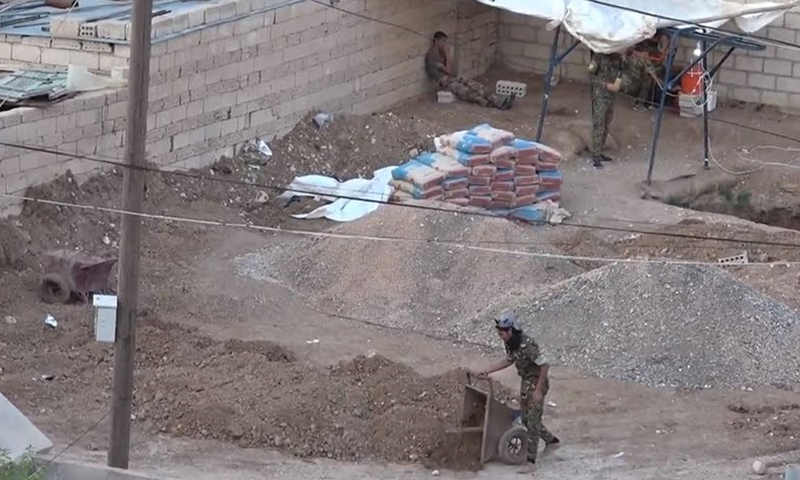 “The patrol surrounded my house and ordered me and my family  to vacate the property. I refused to adhere to their orders because there was no alternative housing to shelter us, and for that, the patrolmen hit me with their rifles, insulted me before my family, and threatened me to evacuate at gunpoint,” a source told Enab Baladi on the condition of anonymity for security reasons.

Based in al-Zaytouneh neighborhood, northeastern al-Qamishli, the man recounted how a patrol from the Syrian Democratic Forces (SDF) came to evict him and his family from their house to continue digging a tunnel that runs under his property.

The SDF dug tunnels of various depths and dimensions on its military fronts on the Turkey-backed Syrian National Army (SNA) factions’ areas, which continue to witness occasional strikes from both sides.

The residents did not see the tunnels set to protect the SDF as a necessity that justifies the encroachment on their property rights. They repeatedly complained about these tunnels’ utility, especially after the tunnels proved their failure to save other areas that eventually fell under Turkey’s control; however, their complaints were ignored by the SDF.

A lawyer from the al-Qahtaniyah city told Enab Baladi that he was among those affected by the SDF’s tunnels and trenches, which caused him to lose the monetary value of his land and kept buyers away from it.

The lawyer, who requested his name to be withheld for security reasons, owns a land divided into several plots on the city’s northeast side. He sold a plot of 400 square meters for about 8 million Syrian pounds (SYP = 2,800 USD).

When the SDF began digging tunnels and raising earthen berms on his land, potential buyers refrained from buying it, and the price of the plot dropped by almost 50%, as most buyers did not proceed with the sale transaction. The lawyer mentioned that he had protested and filed complaints more than once but to no avail.

Dr. Mohammed from Maabdah city, where oil transmission pipelines intersect with the SDF’s tunnels, mainly in the northern vicinity of the city, described to Enab Baladi the “huge loss” he suffered after buying an apartment within a building still under construction and overlooking the city’s northern ring road at the cost of 20,000 USD.

Sometime after the purchase, Mohammed’s apartment’s building had a big crack rendering it unfit for housing and a threat to surrounding buildings. Later, the building’s contractor informed Mohammed that the crack was due to a recently dug tunnel passing under the building’s foundations.

Tunneling has increased since Russia and Turkey agreed on 22 October 2019 to stop the Peace Spring Operation launched by the Turkish and SNA forces two weeks before the agreement’s date. The forces advanced from the northern borders in the SDF areas in exchange for the withdrawal of Kurdish-led forces from the area that extends up to 30 kilometers from the Syrian-Turkish borders.

The SDF then started fortifying its areas, chiefly in the vicinity of border towns from the northern side opposing the Turkish borders by intensifying the digging of tunnels and trenches.

The tunneling and trenching operations have stirred up and raised people’s concerns. The Syriac Orthodox Archbishop of Jazeera and Euphrates, Mor Maurice, demanded in early 2019 in an interview with Assyria TV to stop tunneling under a Christian Syriac cemetery in Kaddour Bek neighborhood, northern al-Qamishli, only 500 meters away from the Turkish borders, considering such work to be a violation of Christians’ rights and disrespect to them.

Tunnels and trenches are common around northern cities opposite the Turkish borders, according to a contractor for Zagros Company, which is responsible for hiring workers, providing necessary materials for digging and setting military fortifications, as well as equipping pre-manufactured guarding and barrack rooms for SDF elements.

The tunnels, running for kilometers sometimes, are not just on the cities’ outskirts. Some of them run under the cities’ centers connecting tunnels to one another, the contractor, who requested to remain anonymous, told Enab Baladi.

Earthen berms are raised near the tunnels, as in Rmelan city, which is famous for its oil fields, the contractor added.

The tunnels failed to protect Afrin city, which fell under the Turkish forces and SNA factions’ control following the Olive Branch Operation in 2018, despite its strong fortifications and difficult terrain. Still, SDF officials use military fortifications as an excuse to continue digging tunnels.

Military analyst Colonel Hatem al-Rawi told Enab Baladi that the trenches in Afrin were “well developed,” with sufficiently thickened concrete edges, with rooms, training spaces, and weapon storage areas, but they “failed in protecting the city”. They were only useful in sheltering SDF elements during the shelling; they are helpful only in remote warfare.

In the case of direct ground battles between Turkish forces and the SDF, “the tunnels will not play a combat function,” al-Rawi said. He noted that armament, the intensity of attacks, and numbers of fighters of the Turkish side would cancel any combat role for the tunnels “at the first direct on ground fighting.”

Besides the military use of tunneling, it is a way to cover up the “corruption” of some of the SDF leaders through hundreds of tenders needed for digging operations, a former employee of the Russian Kurdish Center told Enab Baladi on the condition of anonymity. The tunnels are also an “excuse” for the SDF to demand millions of dollars for logistic and financial support from the International Coalition Forces (ICF), which supports the SDF in its fight against the Islamic State (IS) cells.

On the other hand, a member of the SDF’s Internal Security Forces said that the purpose behind digging tunnels and trenches is to prevent infiltration attempts from areas controlled by the Turkey-backed SNA, such as the Ayn Issa area in northern al-Raqqa or eastern Aleppo countryside near Manbij. The SDF plans on digging trenches along the Turkish borders in some areas like al-Qamishli, opposite the Turkish city of Nusaybin.

The Autonomous Administration of North and East Syria (AANES) had dug trenches near areas of contact with the Syrian regime and the Turkey-backed SNA to prevent the smuggling of materials and collect customs and taxes imposed on goods upon their entrance and exit from and to the area controlled by the AANES, the SDF’s Internal Security Forces’ member said.