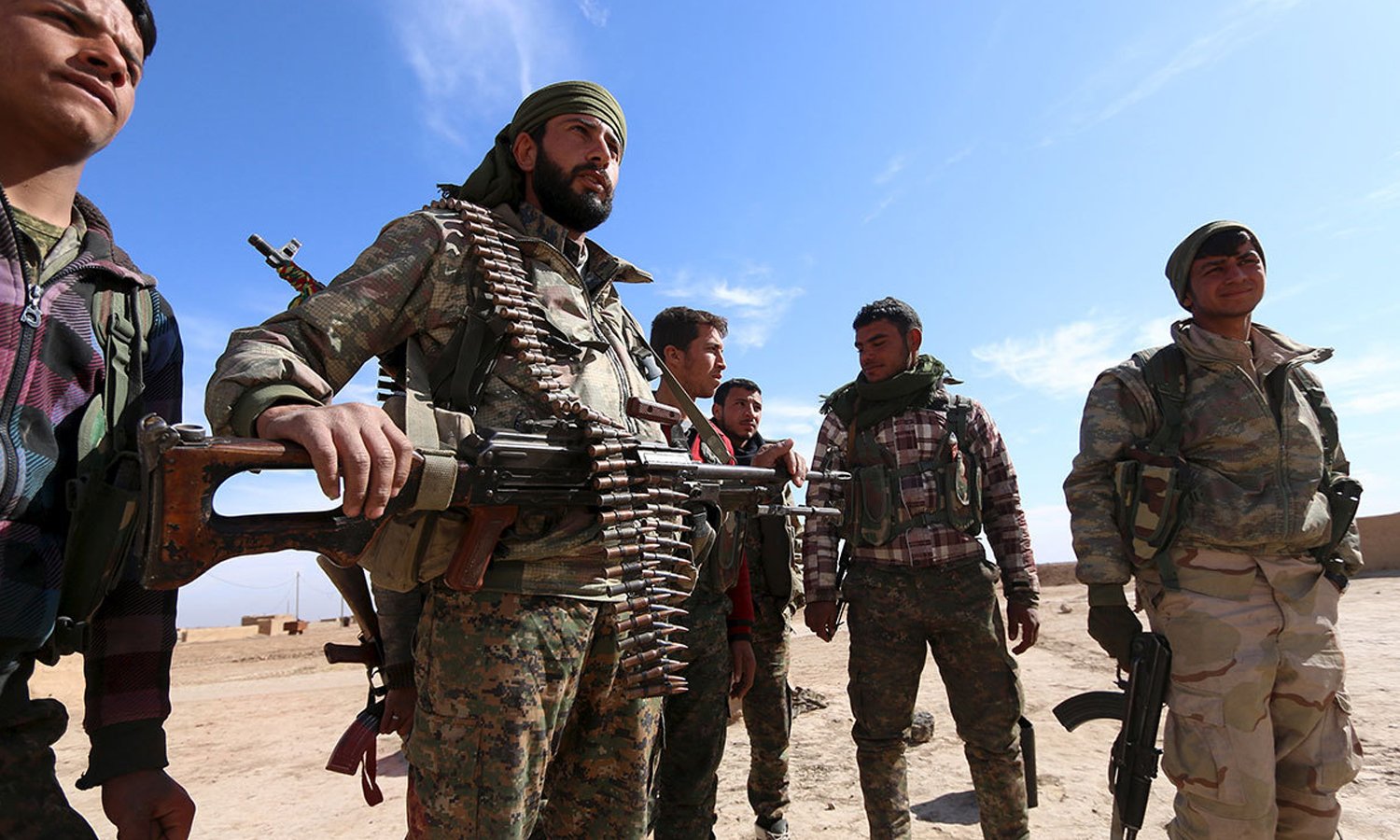 SDF fighters on the outskirts of al-Hasakah city —2017 (Reuters) 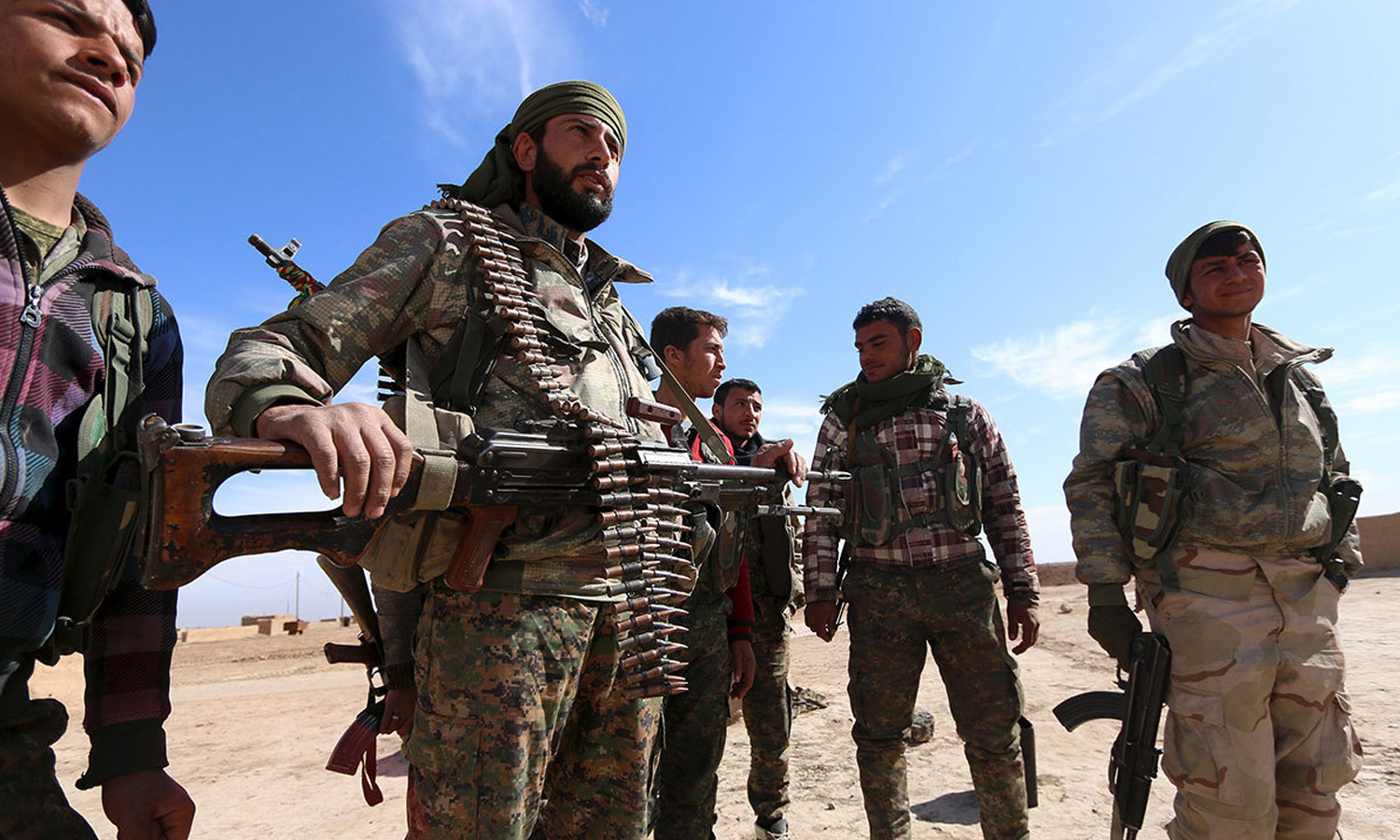 It has been two years since Jaber, who works in a car repair shop, was stuck in Raqqa city, unable to leave it at all. He fears the conscription checkpoints spreading across his city’s suburbs.

Jaber Muhammad, 28 years old and resident of the al-Der’iyeh neighborhood on the western outskirts of Raqqa city, fends for a family of five.

“It is a life-threatening nightmare,” Jaber called the conscription drives led by the Syrian Democratic Forces (SDF). He relives this nightmare every time the SDF forcibly enlists people in Raqqa.

On 26 January, the nightmare started to haunt Jaber all over again. The Defense Office of the Autonomous Administration of North and East Syria dispatched a circular calling all persons eligible for the so-called “duty of self-defense” to “legalize their status and obtain mandatory service booklet.”

Jaber would not show up at the relevant department as long as he is capable of dodging the recruitment checkpoints, he said. Several of Jaber’s relatives and friends have abandoned Raqqa headed to Turkey, not in search of better job opportunities, but mostly escaping the SDF-mandated conscription.

Bassel al-Jasim, 25 years old, fled a military training camp by the 17th Division, dedicated to conscripts in the areas north of Raqqa.

Jasim escaped because “his family duties make it difficult for him to enroll with any military party,” he told Enab Baladi, particularly because the 35,000 Syrian Pounds the conscripts are paid as a salary do not cover any of the family’s needs.

Neither the checkpoints’ strict measures nor the SDF’s recruitment campaigns managed to change Bassel’s mind, who does not fear the consequences of evading the self-defense draft. At worst, he will be caught and forced into serving within the SDF ranks, spending most of the service’s time at training camps or guarding SDF-affiliated facilities.

For his part, Khalid al-Hussain, 27 years old, was forced to leave his teaching job at the elementary schools in the Tawi village, the eastern countryside of Raqqa, after the Education Committee of the Raqqa Local Council made it mandatory for its workers to perform the duty of self-defense.

Today, Khalid works on the village’s farms and rarely leaves it, unless it is an emergency, because he is concerned about being pressed into joining the SDF.

For Khalid, there are no reasons anymore for recruiting people, particularly since the Autonomous Administration is currently in control of wide areas in Syria, with thousands of volunteer recruits fighting for it.

Conscription was imposed for the first time by the People’s Protection Units (YPG) following the Duhok Agreement, signed by the Movement for a Democratic Society and the Kurdish National Council (KNC) in 2014.

In June 2019, the Autonomous Administration ratified the Conscription Law, to be enforced in its control areas. The Duty of Self-Defense consists of 35 articles, providing regulations on service, exemption and postponement, and others pertaining to all target recruits.

The abolition of conscription imposed by the SDF was one of the major conditions set by the KNC to engage in the intra-Kurdish talks, under the U.S. auspices, in 2020.

Backed by the U.S.-led coalition, the SDF continues to combat sleeper cells of the Islamic State (IS), with the latter depending on guerrilla warfare and hit-and-run tactics.

The SDF also engages in sporadic skirmishes with the armed groups of the Syrian National Army (SNA) in the areas on the Syria-Turkey borders that Turkey advanced to in 2019, while maintaining tense, interest-based relations with the Syrian regime forces.

Enlisted to fight or to show obedience?

The area’s people are unlikely to accept conscription into the SDF, particularly because these Kurdish led forces have not had a clear position of Iran’s military presence in Syria, which has so far “strained the country,” not to mention their “ambiguous” position of the Syrian regime, Ali al-Saleh, 40 years old Arabic language teacher from the eastern countryside of Deir ez-Zor, told Enab Baladi.

Through conscription, the SDF is not seeking to boost its manpower. The SDF’s chief goal is rather integrating all classes of society into its ranks, both civilians and militants, to convey to the world that its project is of a Syrian, not a foreign, character, as it is accused by detractors, he added.

In late 2020, people in the SDF-controlled villages and cities took to the street to protest conscription.

Under the Self-Defense Law, compulsory military service must be performed by 18 years old young men, including original residents of the area or Syrian nationals coming from areas other than north and eastern parts of the country and who have been living in the area for over five years, in addition to other 18 years old Ajanibs or Maktoumeen, stateless and unregistered young men.