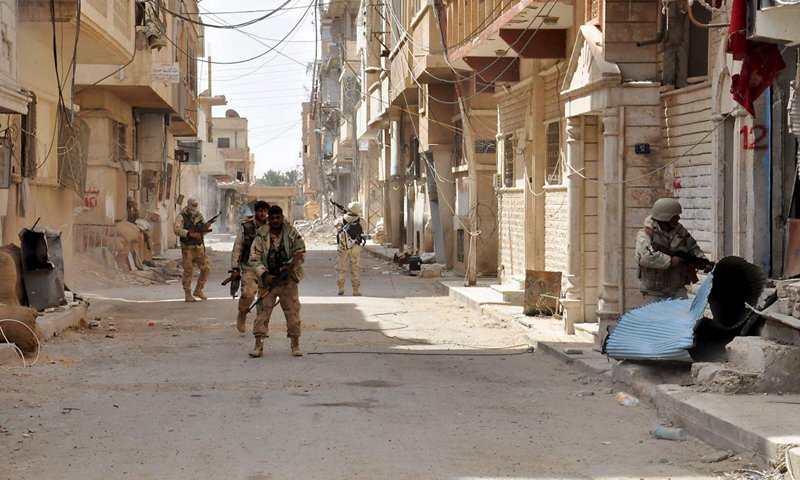 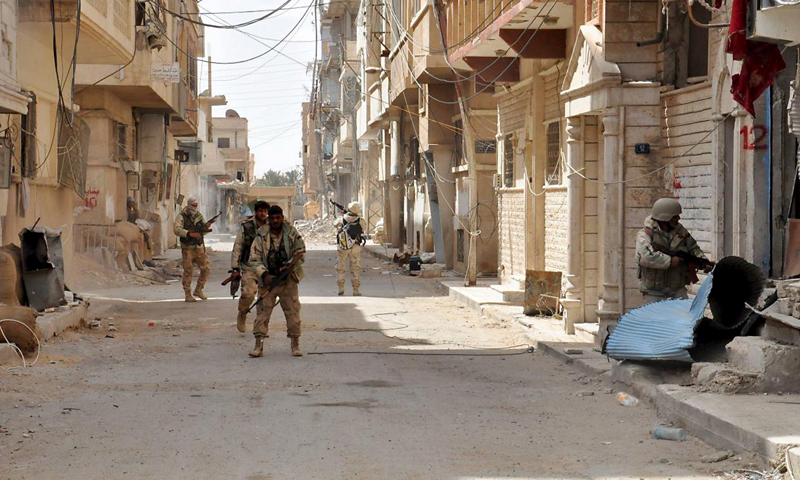 In the depths of the Syrian desert, the “strategic” al-Sukhna district, stretching from the eastern borders of Palmyra as far as Deir ez-Zor, has been hitting headlines lately, being a site for unrelenting attacks and security chaos that are affecting civilians and militants alike.

Even though the Syrian regime managed to have the entire area in its grip in 2017, offered aerial assistance from Russian military aircraft, two other military groups share the regime’s control over al-Sukhna today— Iranian forces and the Islamic State (IS).

Syrian regime air and ground forces comb the area regularly, but IS fighters have mastered the arts of concealment and camouflage in the wide desert terrains, expanding from Deir ez-Zor in the east to the Iraqi borders in the south.

Al-Sukhna is located on the M20 road, 70 KM east of Palmyra.

It was the M20 that granted this desert district its strategic significance, as it is the sole supply line for regime forces deployed to Deir ez-Zor and the only ground border to connect Tehran with Damascus after the U.S. forces established the al-Tanf Base in the tri-border area in 2014.

The M20 is the lifeline linking Deir ez-Zor province with other regime-held areas. In its attacks on regime forces and allies passing through this road, the IS has adopted tactics based on ambushes and flash attacks.

In the area, there are fixed military posts, operated by the 18th Division, the 11th Division-Tanks, Badia National Defense, Military Security Shield Forces, and the 4th Division’s Security Office, as well as the Iranian Baqir Brigade and the Quick Reaction Force (QRF), both affiliated to the Badia Security Branch functioning under the Military Security in Palmyra city.

This extensive military deployment by the regime and Iranian forces to al-Sukhna did not deter IS. The latter has adopted 38 attacks in 2020 alone, conducted in Homs desert areas, killing 177 persons, 40 of them died on 30 December 2020 in an ambush near al-Sukhna.

IS’ assaults did not abate in 2021. In the latest attack, IS claimed the lives of 12 regime militants on 3 February, Russian Sputnik reported.

In early 2021, IS fighters accelerated military activities against the regime’s military supply convoys, overcoming the Iranian checkpoints along the road between al-Sukhna and Deir ez-Zor. This situation has coerced the regime to use helicopters to guard the convoys.

Helicopters started covering the military supply convoys of the Republican Guard and the 17th Division along the road from Palmyra to Deir ez-Zor, Yasser, a recruit of the 17th Division, told Enab Baladi, requesting that his surname be withheld for security reasons.

Iranian forces are also offered air guard services, but the helicopters cover their activities for only 100 km along the road between al-Sukhna and Kobajjep, on the M20 road.

Iranian forces have set up a chain of checkpoints along the road between al-Sukhna and Deir ez-Zor, with a mere five km separating one military post from the next, Yasser added, noting that these checkpoints were not targeted by IS, but at the same time failed to provide the necessary protection.

Attacks attributed to IS, a few of which were officially adopted by the group, were not limited to military targets alone, for Deir ez-Zor’s civilians and the area’s Bedouins are constantly hit, neglected by the regime’s military and security forces.

Qassim, whose surname has been withheld for security reasons, no longer drives his small truck to transport goods from Homs to Deir ez-Zor, because the road has become “extremely dangerous.”

The air force patrols comb the area once a day only, and this protection is exclusively intended for the military supply convoys, Qassim said.

As for civilians, no week passes without “at least” two cars stolen and their owners killed, he added.

It is not only IS— deemed responsible for all the attacks— who is to blame, even though it tends to officially claim responsibility for any hits it carries out. There are other forces in the area, Qassim said, pointing to the regime and the Iranian forces’ responsibility for the thefts and lootings.

Qassim was not the first to accuse regime forces of looting. After the regime announced regaining the area from IS in August 2017, the forces started looting the residents’ houses and imposed security permissions on those wishing to return to their homes, Nawaf Ahmad, a resident of the al-Sukhna area, told Enab Baladi.

Nawaf lives in Homs and refuses to return to al-Sukhna even though it was “secured” by the regime forces. In addition to security “restrictions” most of the area’s displaced residents could not return home because the government has not yet reoperated power or gas stations, neither bakeries nor the telecommunication sector.

However, some Bedouin families have returned because they are used to living in desert areas without civil services and need pastures to herd sheep. The returnees have unfortunately turned into targets for all the forces stationed in the area. One Bedouin at least is killed every month, while others continue to lose sheep.

The area is “highly risky.” Armed robberies are happening day and night, Rakan, a resident of al-Sukhna area, told Enab Baladi, requesting that his surname be withheld for security reasons.

Across the area’s pastures, shepherds are attacked all the time, many have been murdered or robbed of their sheep, not to mention night raids, Rakan added.

A month ago, gunmen attacked one of Rakan’s relatives at night and stole 800 of his sheep.

Rakan holds accountable the National Defense militia and the 4th Division-affiliated security service. These are the only military groups that have vehicles suitable for transporting sheep. But no one dares to bring any of these two groups to account.

Landmines are another threat to the lives of the area’s shepherds, Rakan added. These include explosive war remnants left by IS, and new mines planted by the regime forces.

As mentioned above, none of the area’s service sectors is operative, but it still has one active Police station, a policeman told Enab Baladi on the condition of anonymity.

The police lack heavy weapons and manpower, for the station is run by less than 20 policemen, he added.

The assaults, murders, and thefts are mostly perpetrated by IS fighters or Syrian army par-militaries in the area, the policeman added. In rare cases, the Bedouins steal from each other.

All the police station can do, given its resources, is to write a theft report, unable to start an investigation because the relevant security services are irresponsive and are focused on combating IS, the policeman said.