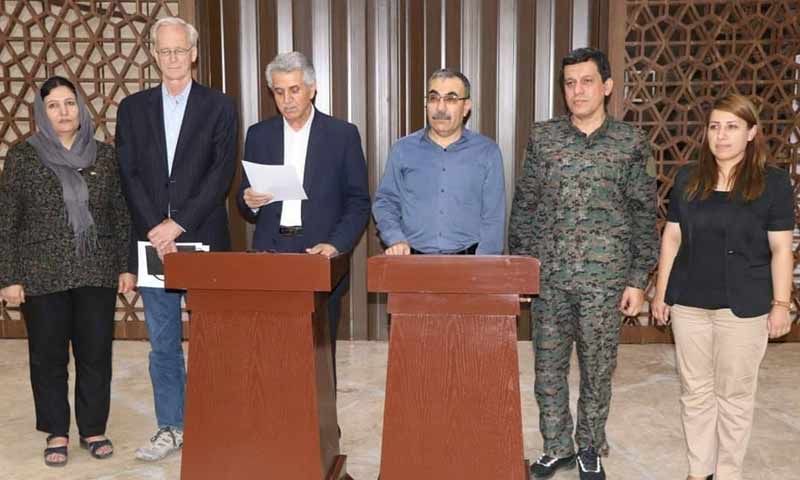 Sama Bakdash, the Democratic Union Party(PYD) spokesperson, said that intra-Kurdish talks will be resumed in February.

The North Press Agency, a media outlet close to the Kurdish-led Autonomous Administration of North and East Syria (NES), on 16 January, quoted Bakdash as saying that the U.S. administration is attempting to get the Kurds engaged in the Syrian political process.

Bakdash indicated that the U.S. Deputy Special Envoy to Syria, David Brownstein, “confirmed his country’s determination to ensure the success of the Kurdish-Kurdish dialogue in Syria.”

However, the general coordinator of the Kurdish Reform Movement and a member of the governing body of the Kurdish National Council( KNC ), Faisal Youssef, told Enab Baladi that scheduling of Kurdish-Kurdish meetings is linked to the U.S. invitation, which has not yet been sent.

The talks will bring together Turkey’s affiliate the KNC and the U.S.-backed Democratic Union Party (PYD), which Ankara has designated as a terrorist group.

Brownstein met with the two parties separately in mid-December 2020.

The US Deputy Special Envoy stated that “Kurdish unity in Syria” is a strategic goal for his country. Through this dialogue, the US is trying to involve the Kurds in the political process, according to Bakdash.

On 15 January, the US Embassy in Damascus said, via its Twitter account, that it supports the Kurdish dialogue and looks forward to its continued progress.

The embassy stated that the Kurdish negotiations “support and complement the broader political process under Security Council Resolution 2254 to ensure a brighter future for all Syrians.”

An official at the U.S. State Department confirmed to Enab Baladi via email that “the US reaffirms its full support to the Kurdish-Kurdish dialogue, that is making significant progress. We hope that it will strengthen broader political process under Security Council Resolution 2254.”

The PYD spokeswoman considered that the NES-controlled areas represent Resolution 2254 in terms of protecting the existing components and representing women in political life.

A KNC member indicated that the KNC is ready for resuming the dialogue with the PYD in order to preserve the gains of the NES.

The negotiations were suspended because the U.S. diplomatic team in northeastern Syria left for the U.S. to follow the presidential elections that ended with the victory of the Democratic candidate, John Biden.

The Kurdish politician stated that the negotiations would discuss ” the mechanism for the participation of the KNC in the NES.”

She also pointed out that the PYD has a proposal to “divide the NES seats equally with the KNC.”

The talks, in which the parties involved said that they had reached positive results, are suspended for the time being, the commander of the Syrian Democratic Forces (SDF), Mazloum Abdi, told Ronahi, a website affiliated to the NES.

Abdi added that the talks between the Kurdish parties in north-eastern Syria are temporarily on hold because the KNC delegation has gone abroad for a while, and the U.S.’s representative is not present. He continued, “we hope that talks will continue when those parties come back.”

On 14 December 2020, unknown assailants attacked a headquarters belonging to the KNC in Syria, in the city of Darbasiyah, north of Hasakah. The council commented on the incident saying that some parties would like to thwart the Kurdish talks.